There have already been some stunning documentaries in 2019. One of the most popular and critically acclaimed was the film focused on the first time mankind set foot on the moon, “Apollo 11.” The most recent offering keeps its focus a bit tighter than “Apollo 11,” and yet simultaneously digs into a larger world.

“Hesburgh” is an upcoming indie documentary that focuses on the life and influence of Father Theodore Hesburgh. Father Hesburgh was an outspoken priest and activist as well as the president of the University of Notre Dame. The new trailer calls him “a mythic figure.” That may not be an exaggeration.

“Fr. Ted [another name for Father Hesburgh] was arguably the most famous Catholic priest in America, and you can’t believe what he ended up being called to do,” said Patrick Creadon, the documentary’s filmmaker. “The stuff he was dealing with then is exactly the same stuff we deal with today. Nuclear proliferation, civil rights. … This turned out to be the most relevant story we’ve told.”

The documentary covers Hesburgh’s incredible influence throughout the years and emphasizes his role as a bridge builder and peacemaker. “This was a person who really spent his whole life being a bridge builder and peacemaker,” Creadon said. “I think that really resonates right now. One side is so busy screaming at the other, we never have a conversation. That’s not how Fr. Ted operated.”

“Hesburgh” is not, however, meant to be a rose-tinted homage to a towering figure in Notre Dame’s history. “We told [Notre Dame] and the [Hesburgh] family and the people who provided the funding the same thing: We are telling this story with rigor, be critical where we need to be and ask the tough questions,” Creadon said. “We weren’t going to make a puff piece.”

This would mean coming to grips with the fact that the real Fr. Hesburgh might not live up to his mythic reputation. The documentary team was prepared to deal with an idol who had feet of clay, but even they were surprised by what they found.

“We weren’t sure if the man behind the myth was going to live up to the legend of Fr. Ted, but what we ended up finding was the opposite,” Creadon said. “We found a man who at every step of his life was able to do the right thing with kindness.”

The lessons Father Hesburgh dedicated his life to teaching and living have been, in large part, abandoned by many today. As such, his example is more valuable than ever. After all, it is those who have forgotten things that are the most in need of a teacher.

Tickets and the trailer for “Hesburgh” are currently available online, and the film will be released on May 3, 2019. 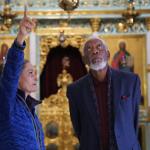 March 4, 2019
In The Story of God Season 3, Morgan Freeman Continues Exploring Beliefs Around the Globe
Next Post

October 17, 2019 Is Yeezus for Realzus? The truth behind Kanye West, Sunday Service, and #JesusIsKing
Browse Our Archives
get the latest from
Backstage Pass
Sign up for our newsletter
POPULAR AT PATHEOS Entertainment
1

Common Grace, 2.35
This post is part of a series walking through the second volume...
view all Entertainment blogs
Copyright 2008-2021, Patheos. All rights reserved.
error: Content is protected !!