Why You Should Listen to the Church’s Teaching on Contraception

Why You Should Listen to the Church’s Teaching on Contraception November 21, 2011 Marc

Once upon a time, there lived a ten-year-old. He was fat and hungry. One day, as he plodded through the house, he saw a piece of cake on the kitchen counter. He reached, grabbed, and was about to introduce it to the inside of his face, when an old man burst into the kitchen and yelled, “Stop!” The ten-year-old fat boy stopped. “You shouldn’t eat that,” the old man said, “for if you do your legs will fall off, your hair will turn gray, and you’ll become a mean, bitter little boy, cursed to spread misery wherever you go.”

The boy ignored the man and ate the cake.  The man groaned and left.

A few days later the boy’s legs fell off, his hair turned gray, and he grew — rather understandably — very miserable. The old man visited him again. “Drink this,” he said, handing him a glass, “and your legs will grow back, your hair ungray, and your misery cease.” The boy looked into the glass. “No,” he said, “I will not. You do not know what is best for me, old man.”

In 1965, contraception was legalized in the United States. In 1968, to the dismay of the world, the Church reaffirmed its teaching against the use of contraception. She said, in Humane Vitae, that:

Responsible men can become more deeply convinced of the truth of the doctrine laid down by the Church on this issue if they reflect on the consequences of methods and plans for artificial birth control. Let them first consider how easily this course of action could open wide the way for marital infidelity and a general lowering of moral standards. Not much experience is needed to be fully aware of human weakness and to understand that human beings—and especially the young, who are so exposed to temptation—need incentives to keep the moral law, and it is an evil thing to make it easy for them to break that law. Another effect that gives cause for alarm is that a man who grows accustomed to the use of contraceptive methods may forget the reverence due to a woman, and, disregarding her physical and emotional equilibrium, reduce her to being a mere instrument for the satisfaction of his own desires, no longer considering her as his partner whom he should surround with care and affection.

The world ignored the Church, mocked Her, and put their women on contraceptives. Today, we have the highest divorce rate we’ve ever had, more broken families than social programs to take care of their kids, and it is estimated that 30 to 60% of all married individuals (in the United States) will engage in infidelity at some point during their marriage. Women are more devalued than ever, as evidenced by the steady rise of pornography use — what with 72 million visitors to pornographic websites every month, 90% of kids 8-16 having viewed hardcore pornography on the Internet — and the general corporation of the woman’s body for the purpose of selling, well, just about everything. Despite having been liberated from their wombs and thus able to work like men, mate like men, and live like men, women are more miserable than ever. Big surprise. 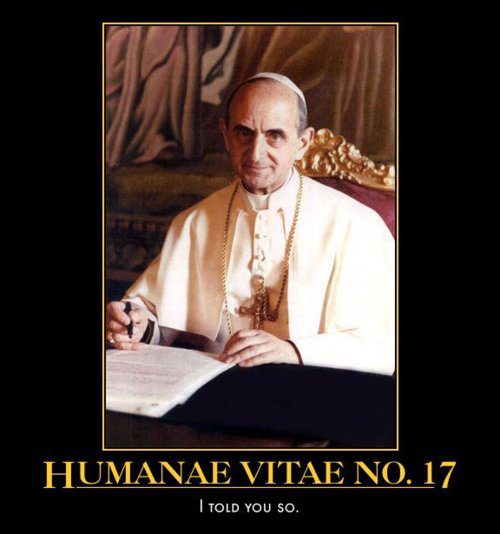 Given that the Roman Catholic Church straight prophesied what would happen if society accepted the widespread use of contraception, and has been absolutely vindicated by history, surely it is not outside of the boundaries of reason to listen to her now? To consider the cure she offers, namely: Stop Using Contraception and Love Each Other Fully? So consider my challenge. I challenge you to take the time to listen to this entire talk by Janet Smith: Contraception: Why Not?. We scorned the Church for her predictions, we owe it to Her to listen now that those predictions have been realized; now that we bear them every day.

It would be one thing if we were content. If we were content, I’d understand the continued rejection of the Church’s teaching on contraception. We could be happy heathens then, reveling in our culture, joyfully rejecting the Boring Old Buzz-kill Church. But we are miserable. Our relationships suck. Our marriages suck. I mean, for goodness’ sake, if we’re teaching middle-schoolers our perverted and desperate attempts to bring back the excitement of sex, we’re clearly unaware of it having any awesomeness.

By the way, it is such a joy to to be against the culture in this matter. As Chesterton said: “A dead thing can go with the stream, but only a living thing can go against it.”

November 19, 2011
4 Ways (and a Bunch More Besides) That YOU Can Heal Our Stupid Liturgical Wounds
Next Post

November 21, 2011 Your Weekly Fix of Catholic Art - Audrey Assad
Recent Comments
0 | Leave a Comment
"Great quality content man, I am really impressed with this one. Thanks for sharing this ..."
diksha gupta Culturally Catholic, Baby.
""You know, it's not Christian to assume I am a bimbo just because God created ..."
Makishima Women Swiftly Running Out Of Things ..."
""...it can come on handy when I need a favor." "Women hate me for this. ..."
Makishima Women Swiftly Running Out Of Things ..."
"There would be fewer Muslims if they were not afraid for their lives to convert ..."
Maria Combe A Pagan Prophecy
Browse Our Archives
get the latest from
Catholic
Sign up for our newsletter
POPULAR AT PATHEOS Catholic
1

Avoid Universalizing Private Devotions And Cultural...
A Little Bit of Nothing
Related posts from Bad Catholic