I mean you can, but you’ll look dumb. 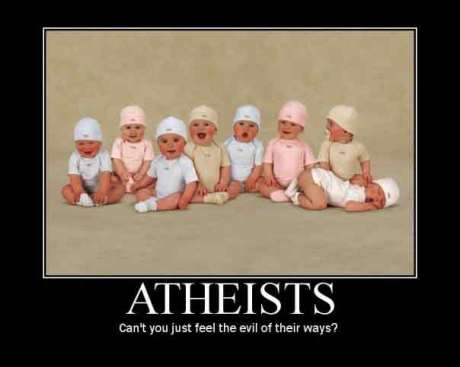 The argument goes like this: Babies aren’t born with any pre-conceived notion of religion, God, or the supernatural world. These falsehoods are forced upon the child’s innocent, atheistic mind by his parents. All religion is indoctrination — there’s nothing inherent or natural about it.

This is an argument heavily promoted by the whole RELIGION IS CHILD ABUSE crowd, which has always made me think, “Dang, I can’t wait to abuse my kids.” (What, you didn’t clean your room? Then I shall impose upon you…THE DOCTRINE OF THE EUCHARIST!)

The only issue I have with this particularly brilliant bit of intellectualism is that its face has been crushed by the massive fist of a 2 million pound, peer-reviewed study from Oxford.

The spent a whole crap ton of money, “involved 57 academics in 20 countries around the world, and spanned disciplines including anthropology, psychology, and philosophy” to conclude what I could have told you for five bucks and some likes on Facebook: Religion is an integral part of human nature. We are born with a belief in the supernatural. Children under 5, with no environmental or parenting influence, think religiously.

As Professor Roger Trigg, from Oxford University and the project’s co-director says: “Attempts to suppress religion are likely to be short-lived as human thought seems to be rooted to religious concepts, such as the existence of supernatural agents or gods, and the possibility of an afterlife or pre-life.”

To this I would only add this: If you deny a child religion, he will only create his own. Tell him nothing about God and the spiritual battle of good and evil — he’ll resist you. You’ll see him with a stick one day, swinging at the dragons that surrounds him — a dogmatic supernaturalist.

Your meme is disallowed.

This is a sell-out argument, right up there with HITLER WAS AN ATHEIST SO ATHEISM IS BAD! Now to be fair, the Internet-Atheist crowd hardly ever uses it as an actual argument. It’s just this awkward, religiously pasted bit of snark that ends every post about why the Catholic Church is the worst thing in the world. (We got Bob Marley, and this is how you treat us!?)

Of course, there’s not a single sane Catholic in existence who would complain if you called out one of the priests who actually molested children. But the use of The Priest as a stereotype for “child molester” (I’m talking to you, r/atheism) is absurd.

As I’ve noted elsewhere, child-molestation is not a Catholic problem. It is a problem of Western culture in general. As Newsweek pointed out in their 2011 article Mean Men, “experts say there’s simply no data to support the claim [that the Church is “a refuge for pederasts”] at all …. based on the surveys and studies conducted by different denominations over the past 30 years, experts who study child abuse say they see little reason to conclude that sexual abuse is mostly a Catholic issue. ‘We don’t see the Catholic Church as a hotbed of this or a place that has a bigger problem than anyone else,’ said Ernie Allen, president of the National Center for Missing and Exploited Children.”

Dr Thomas Plante a Professor of Psychology and an Adjunct Clinical Professor of Psychiatry and Behavioral Sciences at Stanford University School of Medicine says “available research suggests that approximately two to five per cent of priests have had a sexual experience with a minor” a percentage which “is lower than the general adult male population that is best estimated to be closer to eight per cent.”

A child is more likely to be molested by his parents, his neighbors, or family friends than a priest, yet there exists no stereotype about these groups. According to the US Department of Education’s report on the issue, entitled Educator Sexual Misconduct: A Synthesis of Existing Literature, “the physical sexual abuse of students in schools is likely more than 100 times the abuse by [Catholic] priests.” Why, one wonders, in the ever-present debates over the pay of teachers, public school programs and the like, is there no brilliant, hip man who stands up and says, “Yes, but everything you’re saying is suspect because teachers rape children,” as many have said about priests on this blog. Why is there no stereotype against public-school teachers?

I suppose you can continue to make the argument, but don’t expect reasonable answers for too long. After a while it becomes a bit like Godwin’s Law, and all dem sarcatholic kids are just thinking,

Once again, for the sake of good discussion, don’t use this puppy anymore.

3. Light before the sun? #godsfake

This is a fun one, so I don’t blame deez-online-atheists for making this argument to me ALL THE FREAKING TIME. I just figured they’d tell their friends once it was answered. Apparently not: 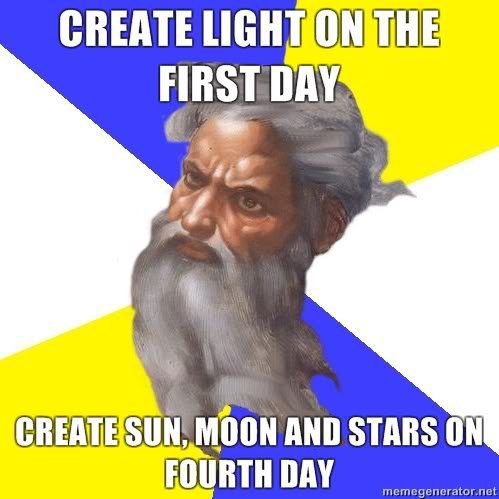 Alright, not to burst the first-grade science class bubble, but light is not solely the product of stars.

According to Big Bang Theory, the first recognizable particle to form after the Big Bang were photons. Photons are “a particle representing a quantum of light or other electromagnetic radiation.” Light is the earliest product of the universe. This isn’t to say that the Genesis account should be taken as true science — this is to say it should be taken as true poetry.

Think: If you are an artist, and you want to create a painting, the first thing you need is a canvas. A canvas is the one thing all your colors, all your splashes and shapes, will have common reference to. It is the constant. Einstein’s Theory of General Relativity shows us that light is that constant, that canvas that makes up the geometry of spacetime.

But that’s all besides the point. While this whole argument might work well with Creationists, it sure as hell doesn’t work with anyone who paid attention in high school.

So that’s that! Hopefully eradicating these molding crumbs of stupid from the Internet will lead to more fruitful dialogue for errbody. Love and kisses.

May 11, 2012
Why Christianity Is Far More Sensible Than Whatever You're Doing Right Now
Next Post

May 15, 2012 Our Godawful Objectification of Men With Same-Sex Attraction
Recent Comments
6 Comments | Leave a Comment
Browse Our Archives
Related posts from Bad Catholic