7 Quick Takes Friday: What the what? Edition

Credit to Anne White for the phrase “what the what?” It’s such a handy phrase when one finds oneself surrounded by big-eared offspring. Or when, you know, one doesn’t want to curse in the blogosphere. Not that one curses in everyday life.

Okaaay….in case you’re wondering, no I’m currently not particularly mentally stable. I’ve spent the last 36 hours with a sick baby and two energetic older kids who really don’t want to be at home. Also, I’ve been having to give the sick baby breathing treatments every four hours, and since he mostly screams and flails during them, I’m pretty sure most of that albuterol has been inhaled by me, leaving me both jittery and light-headed. That could be the coffee, though.

All that stationary time has allowed me to be privy to this debate in the Catholic blogosphere. If you want to understand the depth, breadth and insanity of the debate, though, you really need to start here, at the ever-creepy CatholiCity. For those of you who don’t come to my blog for my links but for my wit (cue soundtrack: crickets chirping), here’s a summary.

The Catholic blogosphere (or at least the part of it that I read) has been abuzz this week over pants.

This is not a joke. Apparently there are those among us who believe it is immoral to wear pants.

I keep hoping if I repeat the word, somehow this will begin to make sense.

For the record, I love skirts. I think they’re pretty and feminine. I, however, wear pants because I am awkward and clumsy, and skirts don’t look that great with flip flops. And I only wear flip flops because they’re freaking awesome. (Also, I’m awkward and clumsy and I trip in anything besides flip flops and tennis shoes. And let’s face it, tying those laces is a lot of work.)

Silly as this debate is, one of the commenters has nevertheless coined a most amazing phrase to sum it all up. I give you…sola skirtura.

Anyway, this sad-but-true debate has brought to my mind some other bizarro rumors that I held to be true about Catholics before I went over to the dark side. I thought I would bring those up and debunk them, and if any of you reading this find flaws in my logic, reasoning, or basic facts, please tell me. I will be neither surprised nor offended. Promise.

But if you think wearing pants is immoral, I don’t wanna hear from you.

What the What?
7 Common Misconceptions about Catholic Belief#7

We can only confess our sins to a priest, who then forgives us.
Wrong! We confess our sins to God; the priest just acts as a spiritual intermediary, who prays for God’s forgiveness along with the confessor after the confession is complete, and who then (through the power of Christ) grants the confessor absolution. Also, while confession is a necessary (and wonderful, I might add) sacrament, this does not mean that any confession must be heard by a priest in order for God to forgive our sins. Soldiers on the battlefield, those who die suddenly, etc, can all repent at the moment of death and (I believe) God will hear and forgive them. But I’m not God, and I don’t know how bad these people were, so if you’re one of them, I make no promises!

We believe we can work our way to heaven.

Actually we Catholics believe that we can only be saved by the grace of God, which is enabled through Christ’s sacrifice. But we do believe that, as God has given us the gift of free will, we must accept and cooperate with that grace. The seven sacraments (baptism, confirmation, the Eucharist, reconciliation, anointing of the sick, holy orders and matrimony) help us to accept the grace of God.

Well, yes, we do pray to the saints, but we don’t worship the saints. There is a big difference. We believe that there is a communion of Christians, and that this communion does not end with death. Therefore, just as we would ask family or friends to pray for us, so too can we approach the saints and ask for their prayers.

We believe the Pope is infallible.

Well, yes and no. We believe that the Pope can be infallible when he makes certain statements. We call these statements “ex cathedra”, and we believe that they are made when the Holy Spirit preserves the Pope from even the possibility of error when he is making certain serious proclamations about faith or morals. This doesn’t mean that the Pope is free from sin, or that everything he says is always true and correct. It also doesn’t mean that the faithful must do everything he says (although since we consider him to be following in the footsteps of Peter as the head of Christ’s church, it’s probably a good idea.)

It also doesn’t mean that we all have to wear red shoes, but I kinda wish it did. How cool would that be? I love red shoes.

No, we really don’t. But we do love and venerate Mary. Here’s why (from the Catechism):
“By her complete adherence to the Father’s will, to his Son’s redemptive work, and to every prompting of the Holy Spirit, the Virgin Mary is the Church’s model of faith and charity…for this reason she is a mother to us in the order of grace.” 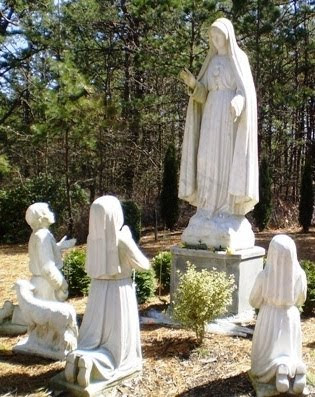 No, really, we use statues and other religious art in much the same way we use pictures of friends and family; to remind us of them, to feel close to them, and in a sense, to honor them. For more elucidation on this subject, I point you to Patrick Madrid’s excellent article about this issue. And for my sola scriptura friends, he gives Biblical grounds for the use of iconography. So there! (Just kidding. About the “so there,” not about the Biblical grounds.)

No debunking here, guys. This one is true!

For those of you who believe that Catholics have no faith, I give you Exhibit A: we believe that when Christ said “This is my Body” and “This is my Blood”…he really meant it. For the record, this belief hearkens back to none other than…gasp!…the Apostles themselves.

I cannot explain how this works. Even Aquinas didn’t tackle transubstantiation. But I believe it, I have felt it, I have experienced it, and this alone has been the greatest affirmation to me that my conversion was true and right.

So I hope now, my Protestant friends, you are a little clearer on the teachings of the Church. It is my greatest hope and prayer that one day the animosity and even hatred that exists between Protestants and Catholics will be healed, and our brotherhood as believers in Jesus Christ will bring us back together, as we once were.
For more conversion-ey stories and experiences, go visit Jen at Conversion Diary.

September 19, 2010 The Scene of the Crime
Recent Comments
0 | Leave a Comment
"So what you're really saying is that you use NFP because you don't want to ..."
Naters The Super Suckage of NFP
"I'm sorry, but planning pregnancy involves using birth control. did you miss that memo?"
leesa maire All Parenthood is #UnplannedParenthood
"Without knowing that God has a purpose for everything, my sufferings in life would be ..."
Jim J. McCrea Sentimental Claptrap, Part V: God Has ..."
"Has the photo been changed? Because what's at the top right now is photo of ..."
Evelyn Sex Breasts and Babies
Browse Our Archives
Related posts from Barefoot and Pregnant