Eleven years ago today, I woke up at 5:30 in the morning, sweaty and terrified. I had been having a nightmare unlike any I had had before.

In my nightmare, my older sister and I were at the traditional A&M; Bonfire. We were there visiting her close friend Jerry, a junior at A&M; and a member of the Corps. We were standing in the front of the large crowd that ringed the huge, blazing tower, and I could feel the heat from the flames. The crowd pressed in behind us, thousands of people trying to get closer to the blaze. We pressed back, trying to keep our footing, but kept getting pushed further and further toward the fire. The heat became intense. Then a log snapped and fell. The dry grass burst into flames as if it were soaked with kerosene. Fire spread so quickly we didn’t know which way to run. We turned one way, then the other, searching for a horizon that didn’t have fire on it. At last we saw a break in the flames and tried to struggle through the surging, panicked throng. My sister’s hand grasped mine desperately, and Jerry kept a painful grip on both our shoulders. The heat was unbearable; I felt as though my face were melting. We couldn’t get through the crowd. We were trapped, and the fire was upon us. At the last second, Jerry shoved us both with superhuman strength, propelling us through the crowd at breakneck speed. I turned to look back, and just as I tasted clean air and gasped gratefully I saw Jerry’s face, wreathed in flames. He didn’t smile or grimace or scream, he just closed his eyes, his jaw set.

I know this sounds bizarre. It was a bizarre dream. When I woke up my face was hot to the touch. I could still feel the blistering heat, unlike any I’ve ever experienced. After a few moments my heart stopped pounding in my ears and I heard voices murmuring softly from my alarm clock. I got up to turn it off and then checked the settings, confused. I never put the radio function on, but for some reason the switch was flipped. I checked the alarm setting too; it wasn’t set to go off until 6, but for some reason it had. I groggily assumed the power must have gone out and made the clock do wonky things, even though the time was perfectly accurate.

I wandered out of my bedroom and through the dark, sleeping house toward the kitchen. I was still spooked by my dream and thought the harsh light of the kitchen and the familiarity of cereal might shake me out of it. My feet hit the cold tile and I groped along the wall for the light switch, only to freeze in shock when light flooded the kitchen. My father was standing at the kitchen sink, his back to me and his hands braced on the kitchen counter, staring vacantly out the darkened window. When I turned the light on he jerked and then turned around a little unsteadily. He looked shaken.

He shook his head and seemed to try to snap out of whatever reverie he had been in. “Nothing…I just had a weird dream. It’s fine. Why are you up so early?” I related my dream to him and he stood there for a few minutes in silence. “That’s weird,” he finally said. “I had a dream about Jerry too.”

“Really?” I asked incredulously. “What was yours?”

“It wasn’t a nightmare, though. It was like…a montage. I saw the faces of all the boys from the youth group, Jono, Brandon, Jeff, all of them, in slow motion. The last face I saw was Jerry’s. But instead of just fading, he smiled at me, turned around and walked into the sunset.”

We stood there for a few more minutes in silence. It was almost unbelievable, really; nothing like this had ever happened before. We were a very religious family, but we didn’t go in for sensationalism or spiritualism. My dad and I were both equally unnerved by the whole experience. Eventually he went back to their bedroom to wake my mom up while I wandered off to take a shower.

After I showered and got ready for school I came back into the kitchen. My mom and dad were huddled around the radio, white-knuckling cups of cold coffee. They looked terrified, but hesitantly so. “What is it?” I demanded, feeling panic well up in my own stomach at the sight of their wide eyes, their clenched fists, their untouched coffee. Dad looked at my mom and then at me. “We…we’re not sure yet. Something happened at A&M.; An accident at the bonfire construction.” “But Micah said Jerry wasn’t scheduled to work last night,” my  mom interjected, answering the question on my face. “I’m sure he’s fine. He’s not answering his phone, but it’s still early.”

We stood there for a while longer, listening to the talk-show hosts dither on about what had happened and why and whether or not anyone was hurt. No one seemed to know anything, and no progress was being made. My mom took me to school like any other day, except that today we rode in grim silence, neither of us reassured by her words. We listened to the radio report that somehow the bonfire had collapsed and students were trapped in the wreckage, but there was nothing else. Not yet.

School that day was odd. I listened to my friends talk about the collapse. Everyone speculated. Already sensational rumors were flying around about drunken crane operators and staggering death tolls. I felt like I was walking underwater. Death had never approached me before; all my grandparents were alive, all my aunts and uncles. I felt sick and uneasy, but I also refused to believe that Jerry was involved. He couldn’t not be fine. He couldn’t not be.

Jerry was a permanent fixture of my childhood. I don’t remember life before him; I have no idea when I first met him, no idea how long my sister and he were friends. He was just always there, with his huge hands and huge smile, his widely spaced teeth and asymmetrical lips. His voice was louder than anyone’s I had ever met; my mom was constantly telling him to keep it down. He always called adults “ma’am” and “sir” and he took great pleasure in teasing us little kids. He called me “village of the damned” because of my white-blond hair, blue eyes, and general weirdness. His first car was a great old green International Scout with no seatbelts in the back that he drove way too fast down the little two-lane, heavily trafficked road that led to our church. Once he caught me trying to fashion a seatbelt for myself out of the straps of my purse and never let me live it down. He would throw trash in the backseat of the car until it filled the floorboards and littered the seat, then he and my sister would drive out past Ft. Worth and she would shovel armloads of trash out the window of the car while he kept an eye out for cops. I remember him singing Everclear’s “Santa Monica” off-key in the front seat. For some reason he loved the part that said, “with my big black boots and an old suitcase,” and every time he sang it he practically screamed the word “boots” and drew the last syllable of “suitcase” out until it resembled nothing so much as a dying cat. He also loved “Friends in Low Places”, and to this day I can’t ever hear that song without picturing Jerry singing along, eyes squinted and face contorted as he belted it out along with Garth.

But none of those things really describe who Jerry was. There’s a tendency to idolize the dead, to make them seem better than they were, and I think that tendency is much stronger when the dead are cut down in their prime. Any stranger reading through the numerous stories about Jerry on his tribute website would likely think that many of the stories were just that; an exaggeration meant to glorify our dead friend. But it’s not true. In my whole life, I’ve only known two other people who possess the same quality Jerry had. One of them is my father; the other is a friend from college. And all three have something in them that I can’t explain perfectly other than to say they are innately, inherently, down to their very bones, good. It’s apparent in everything from the way they love their families to the way they treat waitresses. They are charitable, compassionate, giving, generous and joyful. Of course they sin and make mistakes; we all do. There’s no getting around the human condition. But there was just something in Jerry that made everyone who met him believe in the goodness of humanity again. He inspired faith, love and trust in everyone, from his parents to his friend’s annoying kid sister to the random guy he once helped push a stalled car several miles uphill in the Texas summer.

I still don’t remember the rest of that day very clearly. Rumors flew around me and I only half-heard them. At some point I heard that Jerry had been at the bonfire, covering someone else’s shift, and that no one had been able to find him. My dad showed up in the afternoon and I ran out into the parking lot to meet him. I crumpled against his chest at once and started crying, and then managed to choke out the question no one would answer for me. “Dad, did they find him? Will he be okay?” My dad looked stunned. He had assumed I already knew. “Sweetheart…Jerry’s dead.”

Jerry’s been dead for eleven years now, and hardly a day goes by that I don’t think about him. It’s not like we were close; I was an annoying little tag-along who half hero-worshiped him and half wanted to marry him. But he was a huge part of our family. His death left an emptiness in my sister’s life that can never be filled again. I think back to the years when he filled our kitchen with his booming voice and drank every Dr. Pepper my mom ever bought, and our kitchen seems a little too quiet now. The Dr. Peppers stay in the fridge a little too long.

I know God has a plan for everything. I’ve never doubted that. I know that for some reason He allowed that center pole to snap and those twelve students to leave this world, but I don’t know what that reason is and I wish Jerry were still here.

Eternal rest grant unto him, O Lord, and may perpetual light shine upon him. 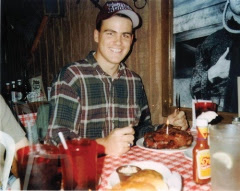