This is going to be a quickie post, just to let you all know that actually I am still alive, just very, very busy with family and friends. I promise to be posting more regularly after Christmas, but this is likely going to be the last post I write until after Christmas.

However, to whet your appetite for what is to come, I’ve been working and re-working a post that I hope you will all find interesting. It’s a love story of sorts, and I’ll have it up after Christmas and hopefully before the New Year.

Things have been bustling and busy since we got to Texas. We’ve been able to spend a lot of time with family and friends, the girls had a wonderful joint birthday party (many thanks to Kate Wicker for the pirate theme idea), and we’ve finished making most of our Christmas presents. However, all that activity hasn’t left very much time for the slow advent movement that Melanie wrote about. Before we left, I had been trying to implement as much Christmas story-tellling and saint-day celebrating as I could, without planning, without stressing, just emphasizing calmness and trying to foster in my children the joy of the season by being joyful myself. I was really getting in to the groove, too; we were spending less time watching movies and more time in the kitchen baking or in the living room playing together. We were singing snatches of what Christmas songs I could remember and talking about the Annunciation, Mary and Joseph, Elizabeth and Zachariah. I was feeling calmer and more at peace, and so were the girls. Hitting and tantrums were down to a minimum, and the hope and joy that Christmas promises seemed more real and more tangible than ever before.

But traveling and visiting brought it all to a screeching halt. I’ve been busy and distracted, answering questions with an incessant string of “not right now”‘s. The girls and Liam have been bundled up and taken hither and thither, missing naps and eating on the go, bombarded with hugs and kisses from loving aunts, uncles, grandparents and cousins. Any quiet time they’ve had has rapidly devolved into tantrums, hitting and then collapsing, exhausted, in front of a movie.  The Ogre has been spending all his time with us, helping me with the kids all day and then staying up late to work on our Christmas presents. He’s had very little time to study and even less time to sleep. We’ve been short with the kids and short with each other and have not managed to keep that peace that we’ve so wanted to preserve this Advent.

I’ve been trying to figure out how to bring some peace back into our final days of Advent but kept coming up empty-handed. We’re just busy, plain and simple. We hardly ever get to see our relatives and I’m not willing to give up this precious time with them when it likely won’t happen again for a year. We still have presents to finish and wrap, Christmas bread to make, cookies to decorate.  There’s just no way to slow down, to create that peace that we were enjoying at home.

A few nights ago we left a Christmas party at the home of one of my dear friends, a Naval officer who has spent the last year underway in a submarine. We had a great time but the kids were exhausted, so we left before my parents. When we got back to their house we realized that we didn’t have a house key and no one would be able to let us in for at least twenty minutes. I was irritated and tempted to vent my frustration. The kids were tired, it was way past their bedtime, the cold air woke Liam up and he was screaming, and all I wanted to do was get them to bed and have a few minutes alone with a book.

Fortunately that morning I had come across this wonderful post about Advent. It had stayed with me all day, hovering around the edges of my thoughts and actions. Instead of getting angry about being locked out, I laughed it off and grabbed the baby out of the carseat. The Ogre and the girls played Mother May I in the driveway while I rocked Liam on the porch, singing O Holy Night and gazing at the nearly full moon through the bare tree branches. It ended up being a wonderful twenty minutes. The girls drifted in and out of my song, singing along whenever they came near me. Liam and I stared at the moon and each other, enjoying the stillness and the song. The Ogre and the girls provided a lovely background noise, a tapestry of giggles and squeals and “Mother May I’s”.

Funnily enough, that’s been one of the best moments we’ve had since coming to Texas. And it wouldn’t have been possible if I hadn’t let it happen.

The secret to real Advent peace isn’t clearing a schedule, baking cookies, or telling stories. It’s just letting that peace in, softening our words and voices, slowing our movements. Reacting positively instead of negatively. Being the spirit of Advent instead of trying to create that spirit. We won’t be having a quiet and calm Advent in the midst of traveling and visiting, but we can still have a peaceful one if we choose to.

December 30, 2010 In the Bleak Midwinter
Recent Comments
0 | Leave a Comment
"So what you're really saying is that you use NFP because you don't want to ..."
Naters The Super Suckage of NFP
"I'm sorry, but planning pregnancy involves using birth control. did you miss that memo?"
leesa maire All Parenthood is #UnplannedParenthood
"Without knowing that God has a purpose for everything, my sufferings in life would be ..."
Jim J. McCrea Sentimental Claptrap, Part V: God Has ..."
"Has the photo been changed? Because what's at the top right now is photo of ..."
Evelyn Sex Breasts and Babies
Browse Our Archives
Related posts from Barefoot and Pregnant 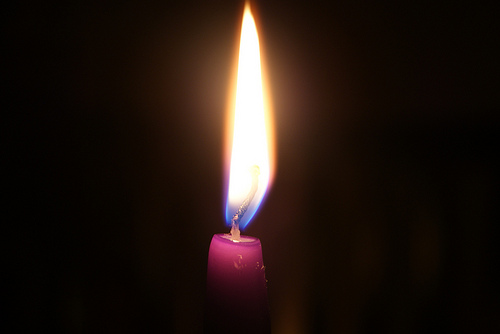 Catholic
Ready or Not, Advent's Here
Barefoot and Pregnant