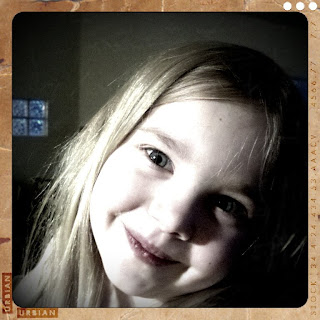 Yesterday, Sienna did a spectacular face-plant off her scooter onto the concrete parking lot. The Ogre hustled her upstairs, where he immediately got some ice on her already swelling cheek. A few minutes later, I left off chopping shallots for dinner to wash and inspect her face.

We were in the bathroom and I was gently scrubbing the dirt out of her scraped, bruised cheek and temple while explaining to her the necessity for keeping ice on her face. “It’s so it won’t swell, honey,” I said, dabbing at little drops of blood.

“What’s swell?” she asked. “Swelling is when something gets big and puffy,” I explained.

That kid. She kills me.

The Ogre’s brother, the one in the middle up above, and his wife turned us on to a new band called Mumford and Sons. 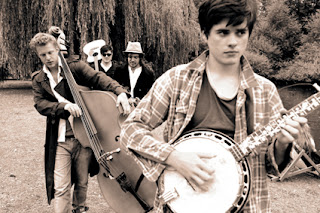 This is them. I love them. Look, they use a banjo! How cool is that? And they’re all adorable. And their music videos are fabulous (look for them on youtube). As the Ogre says, they have a sense of the dramatic which is so missing in modern music.

So we have their cd, and we’ve been playing it on repeat, so much so that Sienna sings along. But yesterday I was driving, alone, in the car, contemplating an issue that I have been grappling with lately. Sparing you the details, let’s just say that I’ve really been struggling with something. And then the cd went silent. Confused, I let it play for a minute, and then heard a song which I had somehow never heard before, even though it’s right in the middle of the cd.

It was like someone poured ice water over me. The song was beautiful, and the lyrics were so incredible. I felt like I was having a mystical experience, as if the communion of saints were speaking directly to me. And even if it wasn’t so, and it was just a weird coincidence, I will forever treasure this song. And because I want you to treasure it to, here’s the song.

Don’t you just have chills?

May 20, 2011 7 Quick Takes Friday!
Recent Comments
0 | Leave a Comment
"So what you're really saying is that you use NFP because you don't want to ..."
Naters The Super Suckage of NFP
"I'm sorry, but planning pregnancy involves using birth control. did you miss that memo?"
leesa maire All Parenthood is #UnplannedParenthood
"Without knowing that God has a purpose for everything, my sufferings in life would be ..."
Jim J. McCrea Sentimental Claptrap, Part V: God Has ..."
"Has the photo been changed? Because what's at the top right now is photo of ..."
Evelyn Sex Breasts and Babies
Browse Our Archives
Related posts from Barefoot and Pregnant