Abortion from the Front Lines

I meant to put this up directly after my post on the Exorcism of Demons, but what followed was, it seemed to me, more necessary.


One of the most wonderful things about being an adult convert to the Catholic Church is that we have the freedom to choose our own Godparents. When my priest asked me who I would like to stand beside me and take my baptismal vows along with me, there wasn’t much question about who I would choose. I asked the first two people whom the Ogre and I went to when we learned that I was pregnant, the first two people whom I called, hysterical and in tears, when the engaged encounter couple tried to derail our marriage, the first two people I think of when I have any question about the faith, and generally two of my favorite people on the planet, Chuck and Pat Pelletier.

These two have been fighting on the front lines of the pro-life movement for several decades. They have poured their hearts and souls into a crisis pregnancy center here in the Metroplex, Mother and Unborn Baby Care of North Texas. The center is currently in it’s 27th year. They also do sidewalk counseling and prayer at the local abortion mills with Catholics United for Life of North Texas. Each Good Friday my Godfather organizes a huge group of Catholics to gather at a local abortion clinic and say rosary after rosary for the lives lost and the souls damaged within those walls. The Ogre and I had the opportunity to go this year, and it was an amazing experience. Sienna joined us, along with the Pelletier’s many grandchildren and loads of other young children, and watching as the youngest among stood still and solemn for well over an hour, little plastic rosaries dangling from their fingers, gave me a sense of hope for the future that I will not soon forget.


I hope to write a long post about my godparents’ fascinating and incredible lives soon, but for now, I leave you with the comments my Godfather emailed me last week.

Please note that I will be a bit more overly sensitive to comments on this post. As always, I welcome discussion, but any comment that attacks the writer of this post, who is exceedingly dear to me, in any way, will be deleted without hesitation. 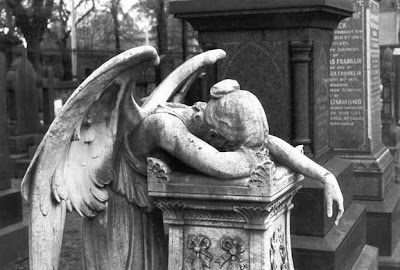 I have prayed one decade of my daily rosary for women who have had abortions for over 27 years.
I’ve gone to abortion mills to pray three days each week for over two decades and pray for all the victims of abortion including the workers.
Blessed Teresa of Calcutta said that women have abortions for two reasons: fear and selfishness. She was completely right in my opinion.
When you watch women walk into the mills so many times with a cavalier attitude, and work with them in post abortion counseling, it becomes apparent that in many cases those women are willing victims.
That’s an unpopular stance to take in much of the pro-life community. We must love all of those involved in the abortion industry including the customers who, at least objectively if not subjectively, are guilty of mortal sins that are so damaging. Willingly procured abortions are also one of only seven automatic excommunications prescribed by the church for those who knowingly and without coercion or force commit the act.
We must work diligently and continuously to prevent the horrible consequences that befall women who have aborted the precious gift of life that God has entrusted to them, no matter the circumstances of conception.
Abortionists are not idealists. Believe me; they are in it for the money. They would do them for free if it was idealism!
Almost without exception the abortion workers are in it for the money or to justify their own previous abortions or for the assistance they provided for others to obtain abortions. The dictates of a guilty conscience are good and powerful if followed to seek forgiveness and mercy, but a real scourge when the voice heard is subverted into further attempts to assuage it by self justification with more and further involvement in the abortion cause.
Abortion workers also receive more money than they could at clerical jobs they would otherwise qualify for.
Nurses who betray their vocation to help others by turning to assisting in the killing of babies are generally much better compensated than counterparts who work in legitimate medical offices/hospitals and clinics, and they usually work much more comfortable hours than their dedicated counterparts in hospitals.
There is a higher rate of drug and alcohol abuse amongst abortion workers than any other job class, and the amount of satanism and witchcraft in their industry is sky-high.
At the epicenter of witchcrat in the U. S. abortions are done at midnight every Halloween as sacrifices to the demons.
The Routh Street abortion mill in Dallas was at one time run by an avowed witch and her coven was centered at he mill. She had the eyes of a dead fish in what was an otherwise beautiful face.
There was also a large lesbian presence when she was running the mill.
By the way, true exorcisms must be approved by the local Bishop and specific priests must be assigned to that duty. I’m not sure that the priests in Rockford are actually performing exorcisms or just piously and powerfully praying at the mill there.
Lay people should not even hear the official prayers of exorcism of the church when a priest exorcist is praying them to purpose.
Those official prayers should not even be available to the laity and not ever be read or prayed by lay people.
The prayer to St. Michael the Archangel that used to be said at the conclusion of every Mass is the prayer to banish Satan and his minions that is approved for use by the laity.
I believe that if every one who says they are Pro-life would say at least one decade of the rosary each and every day for the mothers, fathers and abortion workers as well for the babies, the Satanic act of abortion would be diminished by a quantum number.
There are over a million legal abortions committed every year in the U.S., AND OVER 60 MILLION SURGICAL ABORTIONS committed worldwide every year – look at that number again. 60 MILLION YEARLY!!
As far as anyone can tell, there are very few women who go to confession after their abortions compared to the number of supposedly Catholic women that have them.
Typically a woman is so devastated by her abortion(s) that they despair of hope that even God could forgive them, or they bury it so deep that they don’t think they need forgiveness (this is Presumption). Almost 50% of all abortions are repeat abortions.
What a great tool for the destruction of souls that Satan has come up with.
I believe that abortion is the greatest tool that he has for the destruction of mankind since the Fall in the Garden temptations.
Sorry for the long rant, but I see the destruction of abortion every day and I just wanted to add some info to the readers for them to consider about how they view the great and heinous evil of abortion.  I beg and urge that more prayer and less discussion be carried on.
Previous Post

August 2, 2011 A Blogger's Manifesto
Recent Comments
0 | Leave a Comment
"So what you're really saying is that you use NFP because you don't want to ..."
Naters The Super Suckage of NFP
"I'm sorry, but planning pregnancy involves using birth control. did you miss that memo?"
leesa maire All Parenthood is #UnplannedParenthood
"Without knowing that God has a purpose for everything, my sufferings in life would be ..."
Jim J. McCrea Sentimental Claptrap, Part V: God Has ..."
"Has the photo been changed? Because what's at the top right now is photo of ..."
Evelyn Sex Breasts and Babies
Browse Our Archives
Related posts from Barefoot and Pregnant