I’m Certain I Shall Be Dead By Morning 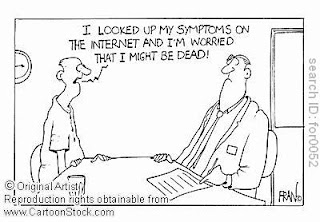 I have to confess something rather embarrassing. I am a total hypochondriac, aided and abetted beyond all bounds of common sense by WebMD.

Yesterday I woke up feeling like I had a cold, and by evening I was certain that I had bronchitis, again. I’m still certain that I have bronchitis again, and expect to be told so when I go to the doctor this afternoon. That’s not the hypochondriac part. The hypochondriac part set in right about the time when I realized that it is simply not normal for a person who has never had bronchitis in recent memory to have bronchitis three times in a month and a half.

Self, said I, something must be compromising our immune system. (Why yes, I do use the royal we when talking to myself, thank you very much). Shall we visit that online bastion of knowledge and wisdom, WebMD, and self-diagnose?

Why self, said myself, I thought you’d never ask.

And so myself and I went trapsing off through the wilds of the interwebs to search for the all-knowing Web, MD.

Once we found him, we asked him what could possibly cause repeated episodes of acute bronchitis? This is what he told us:

Repeated episodes of bacterial acute bronchitis: This condition commonly occurs in people who smoke and in people with immune system problems, such as HIV infection, cystic fibrosis, or cancer.

So I did what any normal hypochondriac would do and ruled out the obvious. I don’t smoke; I don’t know how I could possibly have contracted HIV; I don’t have CF; so I must have cancer.

Yeah, that happened in my head. And it was promptly followed by a flash-forward of the next several weeks of my life, which must surely include multiple visits to the oncologist, who in my imagination looks like Wilson from House, being told that I have mere weeks to live, long, tearful letter-writing sessions to my children so that they will have something from me when I am dead, the Ogre holding my hand and looking soulfully into my eyes and telling me how he simply cannot continue without me (my imagination is obviously married to someone entirely different than my real husband), and then at the last second some miracle cure because, let’s face it, it’s not actually that pleasant to imagine your own death. Especially from cancer.

Although I did spend three whole minutes planning my funeral, at which everyone would have to wear black, because I hate these “let’s wear colors because we’re not mourning a death we’re celebrating a life” funerals. No thanks. I want people to mourn my death. It will be tragic and sad and colors would ruin it, aesthetically speaking.

So that’s what I did yesterday. Today I’m going to the doctor, who will most likely tell me to get a grip and take some cough syrup. And now I kind of feel like I should apologize for giving you such an honest glimpse into the pointless self-indulgent meanderings of my unchecked imagination and erase this post. But as I have nothing better to blog about today, I guess ridiculous bloggery is better than no bloggery at all.

December 1, 2011 Christmas Shopping for the Ogre: A Tale of Woe and Idiocy
Recent Comments
0 | Leave a Comment
Browse Our Archives
Related posts from Barefoot and Pregnant