Christmas Shopping for the Ogre: A Tale of Woe and Idiocy 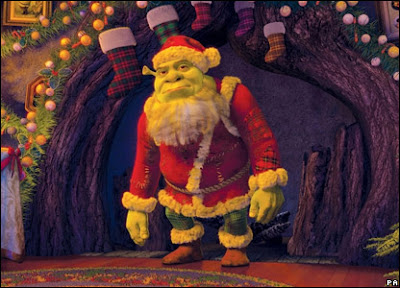 I love Christmas. Each year, as soon as I’ve slept off all that turkey and stuffing, I put on Christmas music and dance a little jig. I love Advent. I love the anticipation of Christmas, the holiday lights sparkling, the kids eyes glowing at all the pretty decorations everywhere, the holiday baking, the coats and scarves that have finally  made their appearances, and all the fun Christmas stuff like going to see The Nutcracker and taking the littles ice skating. I love everything about Christmas…except buying a gift for my husband.

First of all, he’s the most impossible person to buy for EVER. That nickname he has was not given in a void. For the first three years of our marriage, when I (or his mother, or my mother, or Santa) asked him what he wanted for Christmas he would grimly say, “six feet of rope and a ladder.” Once he finally realized that the implication that he would like to hang himself every year at Christmas time was, in fact, not terribly funny and in fact made me burst into tears during a particularly pregnant holiday season, he began to say, “for Christmas I want more time and more sleep.”

How do you buy anything for someone that crotchety? That is literallly the only answer he will give anyone. If God Himself asked my husband what he’d like for Christmas, I guarantee you He’d get the same answer. Which makes sense, since He’s the only being who could actually give those things to my husband.

But I digress. Over the years, my gift-giving record has been…spotty at best. The first Christmas we were married I didn’t give him anything, and since I had delivered his first child to him not five days previously, I considered my Christmas work done. The next year I spent oodles of money on a very nice replica of a gorgeous Rodin sculpture:

The year after that I got him a myriad of little gifts, none of which he particularly liked except his Shakespearan insults mug, which he loves to this day. 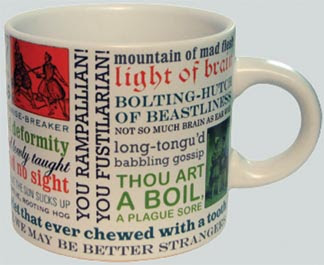 The next year I was about a week and a half post-partum with Charlotte, so I excused myself from Christmas duties again. I think. Or, if I got him anything, it wasn’t particularly memorable. I think I may have bought him some specialty coffee or something.

But the year after that, oh, that was a year to remember. That was my biggest, most disastrous Christmas failure ever.

In my defense, I was still reeling from the shock of finding myself pregnant mere months after having given birth. Also in my defense, I began looking for Christmas presents for the Ogre in August. I was determined to find the perfect gift for the perfect grinch.

After many and many an hour spent perusing every imaginable online retailer (because let’s be honest, mothers of young children don’t do real shopping anymore), I had finally found it. THE gift. The gift to end all gifts.

The Ogre loves tea. But he LOVES tea. And he also has this Asian obsession thing, so he’s always talking about how much better tea would be if you had an actual tea pot, the kind with the basket on top which holds the loose-leaf tea and which you pour the boiling water into and let steep. And then you serve it right out of said tea pot.

So I decided to get him one.

Believe it or not, finding a manly-looking teapot is no easy feat. After rejecting about a million delicate, flower-adorned china tea pots, I finally found a cast-iron, made in Japan, seriously serious looking tea pot.

The price made me wince. I bought it anyway.

But that initial wince was nothing compared to the sinking, crushing despair I felt when the box arrived two weeks before Christmas. It was small. Very small. About the size of a box you would put a set of coasters in.

There has to be a mistake, I thought frantically, even while the back of my mind was shouting “did you check the size of the thing before you paid a hundred dollars for it, you imbecile?” at the front of my mind.

I opened the box. I burst into tears. The thing could hold about two tablespoons of tea. If that.

And then I did what any harried houeswife who is packing to go home for Christmas and knows she won’t have a prayer of returning the awful gift and getting something worthwile in time to wrap and put under the tree would do: I wrapped it. And stuck it in the suitcase.

And when we got to my parents house I put the package under the tree and hoped that the Ogre wouldn’t notice how small his awesome new teapot was. 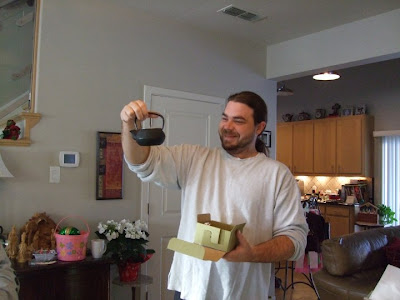 Obviously that plan did not work. But it did give my family an uproarious laugh on Christmas morning. The Ogre was later able to sell the idiotic tea kettle for about half what I paid for it, which proves that suckers like me are everywhere. (NB: we fully disclosed the moronic size of said tea pot when we listed it on Ebay)

Then last year the Ogre took pity on me and gave me a list of books which he wanted. I bought them and wrapped them. It was lame, but after the tea kettle incident I was too afraid to branch out on my own.

The thing is, though, every single year the Ogre buys me these beautiful, awesome, totally perfect gifts. Like when I was newly pregnant with Liam and really kind of depressed about it, he bought me a cameo necklace with the image of a mother and child on it and the words, “Heaven’s gift” engraved on the back. It was so lovely, and exactly the gift I needed.

And year after year, I give him stupid gifts. Or children. Which aren’t stupid and which are totally worthy gifts, in my opinion, but that option’s out this year.

So this year, I’d like to get something really quite special for my grinchy husband. Something which will make him feel the way he makes me feel each Christmas, like I’m the most treasured thing in the world to him. I want to get him something that says that.

But I have no ideas. So I’m calling for reinforcements. You are all clever, insightful people. Help a wife in distress?