In The Bleak Midwinter 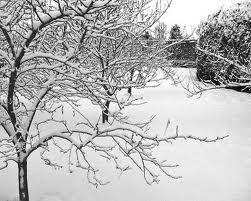 The other day my sister-in-law and I were discussing how much we love the song In the Bleak Midwinter. It is one of my favorite Christmas songs, and I actually had never heard it until Melanie linked to it last year.

But by the time this year rolled around, I had nearly forgotten about this song. When I heard it in passing somewhere, I suddenly remembered how much I adored it and thought, “I should write a blog post about it.”

So that’s what I’m doing. And actually, because I love Christmas music so much, I’ve decided to do a series of posts on my favorite Christmas songs. Ideally they would be in ascending order, with #1 being my all-time favorite, but because I only know what my all-time favorite is and have never actually sat down and ranked the rest, I’m just going to do them randomly. Until the last one. Which shall be the best Christmas song ever written, ever. And I do mean ever.

Anyway. In the Bleak Midwinter was originally a poem by Christina Rosetti. I do love Christina Rosetti very much. I have loved her poems ever since my favorite cousin, in a fit of college literature-love, breathlessly read “The Goblin Market” to my eleven-year-old self. That poem made a deep impression on me. Up until then, my exposure to poetry was mostly in the form of those wretched “Poems for Young Children” picture books and Shel Silverstein (who is not wretched at all). Real, beautiful, melodic, stirring, mysterious and glorious poetry hadn’t been on my radar until my cousin read me that poem. That was pretty much it for me. I became enthralled with poetry fairly quickly. It didn’t take me long to move from Rosetti to Yeats to Shakespeare. It took me much, much longer and many college classes to develop an appreciation for modern poetry, which I now prefer. But still. This poem is lovely. You can’t set “The Waste-Land” to music the way you can with poetry like this.

There are actually two versions of this song. I much prefer the one below, but here is a link to the other one in case you want to compare the two. I think Darke’s version is quite lovely but does not carry the emotional impact that Holst’s does. That’s my totally uneducated opinion, at least. Music is not something I’ve been educated in at all, really. I can only say what I like and what I dislike.

December 17, 2011 Please Pray for Baby Sly
Recent Comments
0 | Leave a Comment
"So what you're really saying is that you use NFP because you don't want to ..."
Naters The Super Suckage of NFP
"I'm sorry, but planning pregnancy involves using birth control. did you miss that memo?"
leesa maire All Parenthood is #UnplannedParenthood
"Without knowing that God has a purpose for everything, my sufferings in life would be ..."
Jim J. McCrea Sentimental Claptrap, Part V: God Has ..."
"Has the photo been changed? Because what's at the top right now is photo of ..."
Evelyn Sex Breasts and Babies
Browse Our Archives
Related posts from Barefoot and Pregnant