Patheos Explore the world's faith through different perspectives on religion and spirituality! Patheos has the views of the prevalent religions and spiritualities of the world.
It’s Friday. Glorious Friday. The Feast Day of the Epiphany. The sun is shining brightly outside, one of the definite benefits of living in Florida, the kids are fighting merrily, the Ogre is snoring loudly, and I’m sipping strong, strong coffee gratefully, thanks to a certain neighbor who took pity on us in our coffee-pot-less state.
#7
Unpacking
is coming along  much more slowly than I remember it happening in the past. As I told the Ogre last night, I think it’s because we have so many more children and so much more room. Also, it’s one thing to unpack things in an apartment; you just put things out, willy-nilly, and rearrange them later, or not.
But now we have an actual house with curtains and things and I’d like it to look nice. I’d like our second-hand things to look their second-hand best within it. So I’m unpacking carefully, arranging and rearranging, and also having to stop every few hours when the kids drag me out to watch them play with the nieghbors.
(Have I mentioned that we have real neighbors with real children?)
#6
Also 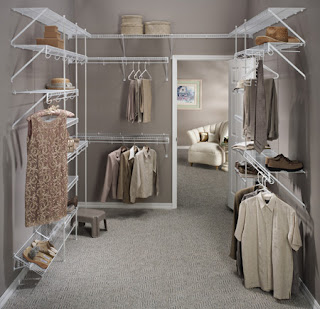 some of the lag in unpacking is due to my utter confusion concerning what I’m to do with proportions I’ve never encountered before.
For instance, it took me nearly two days to unpack and organize our closet. Normally, the closet is an hour-long task. Because the closet is usually the size of an airplane toilet. But we have a…a…a walk-in closet.
And you can actually walk inside it. Hell, you could do a workout video inside it if you wanted. It’s the exact same width as the closet in the picture above, but longer. The shelving is the same type, but longer.
The first time I saw it I actually laughed out loud. I’m not exactly a fashionista, in case you hadn’t guessed. I would have preferred a monstrosity of a kitchen to a  monstrosity of a closet (and actually the kitchen is about the dreamiest of kitchens I could have dreamed up). Originally I figured we’d just  have to have another baby and turn the closet into a nursery. I mean, what else would I put in there?
#5
But Then
I began to unpack my clothes. I assumed most of the boxes that said “Calah’s clothes” were mislabeled since there were so many of them.

Once my clothes were unpacked I was actually pretty horrified. The hanging clothes took up two halves of two racks, the sweaters and sweatshirts took up one entire length of the closet, and my workout pants, yoga pants, t-shirts, and unmentionables took up an entire bureau. 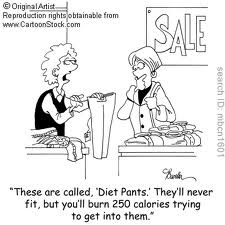 3/4 of those clothes don’t fit me. A very, very small number are too big. Those make up my “Postpartum Chic” wardrobe, which also doubles as the “Post-Holiday Shame” wardrobe.

About a quarter of them fit quite well, some slightly too loose, some slightly too snug, right now. Another quarter are between one and two sizes too small. This is my “Where I Should Be, or Close Enough” wardrobe, which I know I actually have the physical capability to get to, since that has been my primary wardrobe for exactly one six-month period post-Sienna and exactly one six-month period post-Charlotte.

And then there’s my small stockpile of “Post-Mono” clothes, on the off chance that I’m lucky enough to get that particular ailment. Most of these happen to be leftover favorites from high school or clothes that once fit which I shrunk with my spectacular laundry skills, but which looked so cute in miniature that I couldn’t bear to part with them.

You can’t say I’m not prepared for everything.

I felt pretty ashamed once it was all put away. I kept thinking of Betty Duffy’s post about having things for a live she doesn’t lead.  That isn’t really true of me anywhere but the closet. My kitchen things are carefully chosen and well-worn. We have too many books, but that’s not a bad thing, and anyway I might remember how to read soon. Otherwise, we don’t have much in the way of possessions. No TV, flatscreen or otherwise. No Wii, though I’d love one if the Ogre wasn’t such a curmudgeon. No stereo system, no blu-ray player, not even a couch or a coffee table. (Cause we’re poor, not because we’re particularly ascetic.)

But my closet is shameful. And I am ashamed of it. So I’ve decided to give myself one year to lose some weight, provided no new little minion takes root, and at the end of the year, whatever doesn’t fit, I’ll get rid of.

(Um, I mean whatever is too small. The Postpartum Chic wardrobe is essential to my mental health and well-being. You know what I mean.)

I feel good about this resolution. 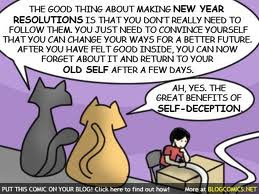 Last year I resolved to be more temperate, but by November I was a raging alcoholic. So we’ll see what happens. Maybe I’ll end up adding a whole new section to my wardrobe. I could go even fatter and get a “Dunlap Wardrobe”

Or not. Anyone wanna take bets?

#1
Speaking of Resolutions, Though, 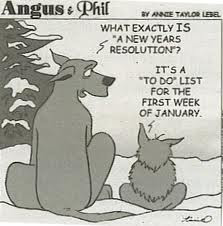 I have a blogging resolution that I simply must keep because it’s driving me to distraction.

I have got to organize my blog.

It is a hot mess. The tags, where they exist, are way too specific and random. You can’t search for anything, not even by tag, because 99% of my posts are unlabelled. I really get frustrated when I go to new blogs and want to learn more about the person by searching, say, “family” or “motherhood” or “janis joplin” (true story) and nothing is labelled or the labels are tangential at best. It doesn’t make for good blog reading.

So I’m going to swallow the bitter pill and organize this here disaster of a blog. Maybe I’ll give it a makeover in the process, too. You never know.

January 7, 2012 Ballet, Books and Bloody Mary
Recent Comments
0 | Leave a Comment
"So what you're really saying is that you use NFP because you don't want to ..."
Naters The Super Suckage of NFP
"I'm sorry, but planning pregnancy involves using birth control. did you miss that memo?"
leesa maire All Parenthood is #UnplannedParenthood
"Without knowing that God has a purpose for everything, my sufferings in life would be ..."
Jim J. McCrea Sentimental Claptrap, Part V: God Has ..."
"Has the photo been changed? Because what's at the top right now is photo of ..."
Evelyn Sex Breasts and Babies
Browse Our Archives
Related posts from Barefoot and Pregnant