A Bad Case of the Mondays 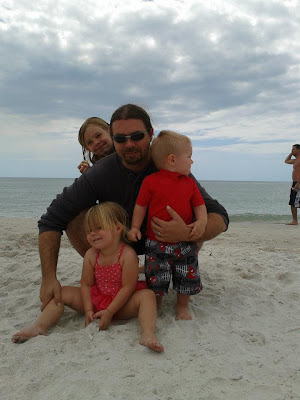 We made it to the beach yesterday and spent a fabulous four hours swimming, building sand castles, collecting shells and forcing screaming toddlers to get in the water whether they wanted to or not. (We’re cruel that way.)

As a direct result of all that fun, though, today has been an epic day of whiny, tired children, a tired mama, and an overall case of the Mondays.

Liam shook things up a little by pulling a steaming-hot mug of steeping tea off the counter and onto his face. He’s fine, just minor first-degree burns, thank goodness. I, however, had such an enormous jolt of adrenaline delivered to my system when I heard that blood-curdling scream (no really, I closed the fifteen-foot gap between me and the wee destructor before the mug hit the tile) that I had to sit down for the next two hours. (After a tepid bath, cool compresses, aloe, and an early naptime for Liam, that is.)

I’m still sitting down, but now it’s voluntary as opposed to necessary, which is a relief.

All in all, not much has been accomplished today, not even washing the sandy laundry still occupying the beach bag on the kitchen floor, so I’ve decided not to devote too much time to blogging lest I disturb the balance of the day and create something worthwhile. Instead, I’ll just give you a couple of links.

First, at the request of one of my blogging buddies and fellow contributor at Ignitum Today, I want to make you all aware of the current cause for the canonization of Archbishop Fulton J. Sheen. I don’t know much about the good Archbishop, except that he’s responsible for the most hilarious quote ever on The Crescat‘s sidebar, but I do know that my friend Bonnie’s son James is alive today through an alleged miracle that is one of the two being considered by the Vatican as they examine the cause for canonization. (I don’t really have any doubts that James’ healing is a miracle, but apparently you have to use the term ‘alleged’ before the Vatican verifies it. I do like that the Church takes this so seriously, however.) Anyway, Bonnie is working for the Sheen Foundation right now, and she’s asked some of her fellow bloggers to post about the Foundation to help raise awareness of the cause. The Sheen Foundation will also need to raise quite a bit of money to cover the costs associated with the tribunal studying the case right now (such as translating everything into Italian and covering the fees of the medical experts who must review and verify all the evidence). Archbishop Sheen is thought to be one of the best candidates for patronage of blogging and new media because of his own pioneering work in radio and television, which might be of special interest to the rest of you bloggers.

You can read about the miraculous healing of Bonnie’s son James here. For more information on Archbishop Sheen or to donate to the Sheen Foundation, visit their website here.

The second link is neither worthy nor holy, but I just can’t stop reading Cracked. Here’s a good place to start: The 5 Creepiest Progressive Parenting Fads. Or, if you’re not a parent or are a parent but don’t want to spend your downtime reading more about parenting (hey, I feel ya), try this one: 6 Horrifying Implications of the Harry Potter Universe. Or if you hate Harry Potter and came over here from Freejinger to tell me what a horrible person I am, don’t worry, the good people at Cracked agree with you. See? Something for everyone. Including foul language and off-color jokes…fair warning.

Okay, the next one is something I can totally get behind: a WaPo article on young Catholic women trying to re-brand NFP. I agree with 99.9% of this article, especially the part about the dreadful clothing worn by most of the women in the terrible NFP manuals. Here’s what I would like to see: a book written on the Marquette method, the method I’m more and more convinced is the only one that will ever work for me, with a woman on the cover wearing an AC/DC t-shirt. And with pop-up illustrations, because let’s face it, a pop-up illustration of the cervix would be both unexpected and hilarious. Can’t you just see the reactions?

(The above is why no one ever asks me to write serious articles on NFP, and why if anyone was thinking about it, they definitely aren’t now.)

Finally, there’s this: the best thing I’ve read all day, or perhaps ever.

I hope your Monday is going better than mine is. If it’s not, here’s something to make you laugh.

April 24, 2012 Why I Haven't Blogged in a Week
Recent Comments
0 | Leave a Comment
Browse Our Archives
Related posts from Barefoot and Pregnant