We learned late last night that tropical storm Debby is slated to make landfall not today, as originally forecast, but Thursday.

Thursday. That’s three more days wind, rain, and kids being cooped up inside.

I celebrated by picking a fight with the Ogre over inspirational YouTube videos.

No, really, I did. We had a lovely dinner with some neighbors last night and the kids got some energy out of their systems, thank God, and when we were all home and the minions were snoring away, the Ogre said he wanted to show me something. He pulled up YouTube and I tried to suppress my knee-jerk “I hate internet videos!” reaction and worked really hard to pry my rusty, angry, cranky mind open and watch the video charitably.

Then, on screen, people started running and my mind snapped shut like a friggin’ Venus flytrap.

Here’s the thing about the Ogre: he loves inspirational videos. Especially physical ones, like videos of the Navy Seals or something.

I completely understand why my  husband wanted to show me this video yesterday. He read my blog post, he knows I’ve been having a hard time with the grey skies and rain, and he knows I’ve just been down generally the last week or so. He wanted to cheer me up, so he found a video of someone falling flat on their face and then picking themselves up and kicking some ass and thought, “This is perfect! My wife could totally do that.”

Key word in that last sentence being could. Yeah, I could do that. I could pick myself up, tell the kids to put on their bathing suits, let them play outside in the torrential rain, then bring them in and spend the afternoon baking cookies and doing crafts. But what I’m going to do is put on an epic Lord of the Rings marathon and stay in my pajamas and tell them to quit whining, because there are kids in third world countries who don’t even know what a hobbit is. And I’m going to do that because of that stupid video, which made me feel like the world’s biggest failure.

Here’s the thing about me: I hate inspirational videos. Hate them. Inspirational videos make me feel like crap. I see someone pick themselves up from a face-plant and go on to win a race and I think, Yeah, awesome for her, but what about us humans? If that were me, I’d probably still be laying on my face on that track, years later, having only moved to limp pathetically to the nearest 7-11 for several hundred pints of Ben and Jerry’s to console myself with. Then I think, maybe that’s just me, though. Maybe that’s my problem. Maybe I’m the only pathetic failure of a human being to ever exist, which is why I don’t find inspirational videos inspirational. I don’t experience moments of ass-kicking awesomeness in my reality, so I don’t find it inspirational when other people do. Speaking of my reality, are we seriously out of ice cream again? 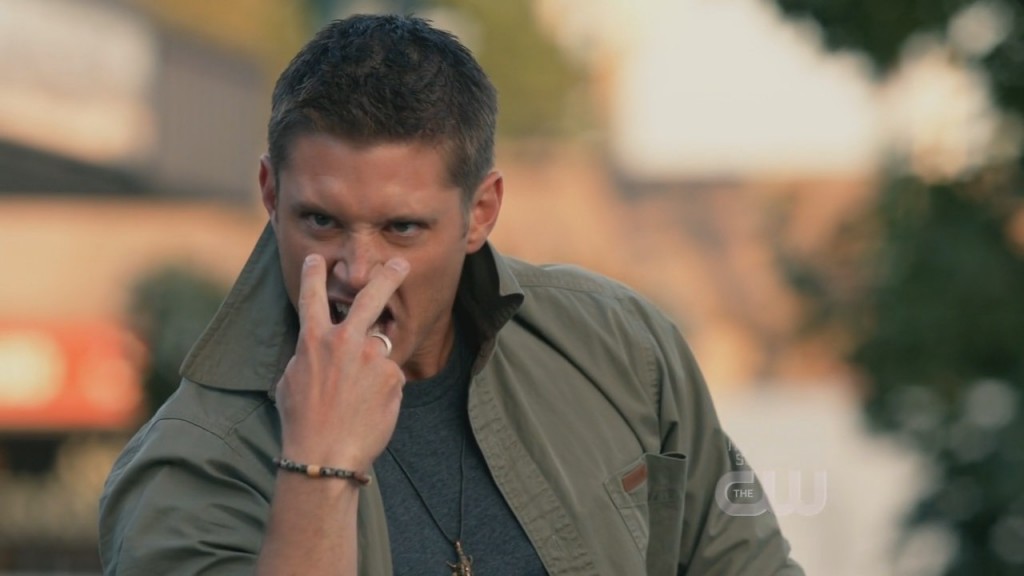 I was trying to explain to the Ogre why it is that I find failure inspirational, and he began to look at me like I had grown another head. And as I was already a little cranky from being forced to sit through a YouTube video of people running, I had a slight hormonal meltdown. The Ogre actually recorded it with his phone, much to my horror, so I can tell you that it went pretty much exactly like this:

I’m tired of you always thinking you’re right! I’m tired of you thinking I’m wrong and stupid for not liking your stupid inspirational videos! You’re not always right, you know that? I don’t care if you think you are, you’re not! And even if you are right, I don’t care! Because I’m never going to find someone falling over and then winning a race inspirational! I’m only inspired by the falling part! And I’m not going to let you make me feel stupid anymore! I choose to feel good about myself! I choose to be happy! And I expect you to start making me feel good about myself! Like, now! Why are you laughing at me?

By the end, the Ogre was laughing so hard he was literally crying. He said it was because I immediately made the leap from, “I choose to feel good about myself” to “so you better start making me feel good about myself”, but I think it’s probably because watching his enormous wife get angry over an inspirational video and then scream at him for no reason before having to try three times to get herself off the couch because she was too mad to ask for his help was actually pretty funny.

After that, he asked if I was done yelling at him so he could watch Boston Legal. I said I was done yelling, but I couldn’t go to bed yet because I didn’t feel triumphant, so could he please wait to turn the TV on until I had thought of a good parting insult?

I didn’t get my insult in, obviously, because he started laughing again, and I was too impatient to wait for him to calm down.  So I just went to bed. I feel much better today, though, and unbelievably, there are patches of blue sky showing outside. Which almost makes up for the fact that Charlotte woke up at 2 am with croup.

Now I’m off to educate my children in the ways of Middle-Earth, where I’m pretty sure they never had to endure lame, week-long tropical storms. I would totally take orcs over this. Totally.

PS: If you put a link to an inspirational video in my combox, I will find you. I’m not saying I’d be a real threat once I did, since I’m mostly only capable of waddling quickly and yelling irrationally at this point, but still. You’ve been warned.

June 28, 2012 The Inappropriate Comment of the Day!
Recent Comments
0 | Leave a Comment
Browse Our Archives
get the latest updates from
Barefoot and Pregnant
and the Patheos
Catholic
Channel
POPULAR AT PATHEOS Catholic
1

Unmasked: Pride, Malice, And The Spirit...
A Little Bit of Nothing
Related posts from Barefoot and Pregnant