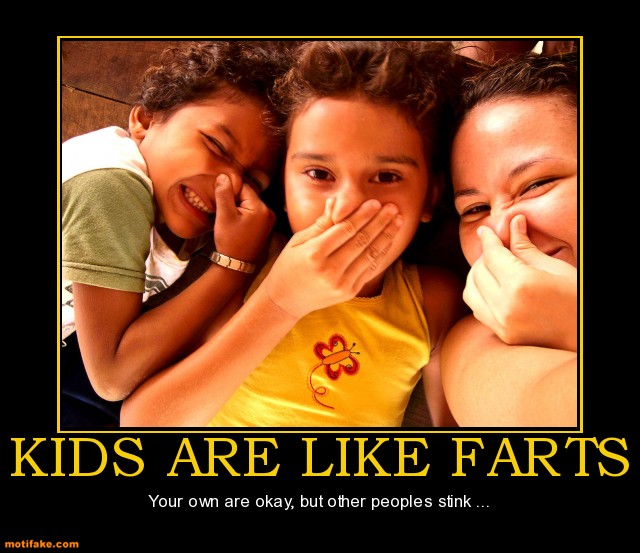 Yesterday, Elizabeth Duffy wrote this great little “Why I Am Catholic” piece. When I read it, a lot of things that I’ve been mulling over about Catholicism, children, and life in general snapped into place for me.

I was never the girl that said, “I want to grow up and get married and have kids.” I mean, I said it sometimes, and meant it sometimes, but only insofar as I thought the idea of Romantic Lovey Love was enchanting and picking out children’s names was entertaining. Actually being a mother, especially a homemaker, seemed like a fate worse than death. I saw it as a life of drudgery and monotony, fit only for those women who weren’t intelligent enough to make something of themselves or for those bizarre creatures who actually seemed to want to spend their days changing diapers and catering to the whims of snot-covered monsters.

Not for me, thought I. I was going to make something of myself. Plus, I didn’t even like children.

I have two younger brothers, but they were younger enough to not be very much a part of my formative memories. We played together on the weekends and fought over toys and tried to bounce each other off the trampoline onto the roof, like all siblings do, but they were in different school buildings and they had their own friends. Most of my friends were in the same boat I was; maybe one or two younger, irritating siblings, but no babies. Children younger than me were not something I was familiar with.

When I was nine months pregnant with Sienna, my co-worker brought her brand new, week-old newborn into the office. When she tried to hand her to me, I panicked. It occurred to me that I could never remember holding a newborn before. I had no idea what to do with the tiny girl. I was terrified that I would break her, and I could not wait until her mother took her back.

Two weeks later, I had my own tiny girl. Looking back through the haze of post-partum depression that clouded those early days isn’t easy, but two emotions stand out for me: terror and resentment. I was utterly afraid of this child, what she represented, what she needed, and what it all meant for me. I was also terribly, terribly resentful of her and all she required, and how little time it left me for me.

I didn’t know then that time would pass and she would grow into a dimpled, smiling baby, a gap-toothed, daredevil toddler, a whirlwind of a six-year-old, all legs and words and energy. By that time we had 2 more, and I had learned to love and even like my own children. But other people’s? Not so much.

There were a few exceptions. My nephews and my nieces. The daughters of a friend in Vegas. My best friend Meaghan’s kids.

I was kind of dreading moving to Ave Maria for just this reason. I knew it would be a town absolutely crawling with children, and I wasn’t sure how I would handle it. I figured the townspeople wouldn’t take too kindly to me if I pulled a Baroness Bomburst:

Potts and Truly Free the Children by movieclips

(scroll to 1:45 for the relevant moment)

We’ve been here a year now, and in that time I’ve been shocked to find that I actually don’t dislike children. Even other people’s children. Even a lot of them.

More unsettling still, I actually like children. At first I figured it was just because the children of my neighbors were exceptional examples, but then I kept meeting more and more children, children of all ages, children clutching books and children hurtling down the street on ripsticks, calm children and wild children, well-behaved children and then my children, and  there has not been a single one that I haven’t liked. It also hit me that all the “exceptions” to my “I don’t like children” rule before we moved here were the sum total of all the children I actually knew in real life.

Mother Theresa famously said something along the lines of, “How can you say there are too many children? That is like saying there are too many flowers.” Well, I never much cared for flowers either. I always thought it was stupid to waste money on something that would just die, and that only looked pretty for a few days.

But I got into the habit of buying flowers a few years ago, the cheap marked-down ones, cutting them short and placing them in little vases around the house. Now I find that I am sad without them. Flowers lift my spirits immeasurably. Being surrounded with beauty, even just a little, elevates me, makes me want to be better, be happier, seek goodness.

It’s the same with children. They are such amazing little creatures, not least because they pull us out of ourselves, completely unconsciously. Children live wholly outside themselves when they are small. As they grow, they gradually turn inward, but when they are little they exist in the realm of human interaction. Often times they require it, because they can’t feed or clothe or comfort themselves. But they also want to interact. They want to ask questions and be answered. They want to tell stories and show off and dance and laugh and play.

This is the part of Elizabeth’s post that struck me yesterday:

“A priest once told me that you can tell Catholic art from other religious art, because Catholic art is always relational–Mary is surrounded by the Christ child and St John. The subjects often make eye contact with each other or with the viewer rather than looking inward. We find Christ and ourselves in the transformative and redeeming grace of relationships.”

It’s easier to keep ourselves locked away. It’s infinitely easier to live in a world free of children, a world that doesn’t rotate on unexpected spills, tumbles, tussles, tantrums, chaos and interruption. Western culture has fairly unanimously decided that a world without children, or at least with a sensible number of well-planned ones, is much preferred to a world bursting with children.

Children require so much work. A few months ago, when I was struggling again with post-partum depression, a commenter advised me to take a day off. “And by a day off, I don’t mean a day at the spa. I mean, take a day and forget the house and the dishes and just play with your kids.”

Our world is absolutely right that children, in the abstract, are a terrible drain on our time, energy, and resources. But children don’t exist in the abstract. They exist in reality, and each one brings something to our world that no one ever has before, or will ever again. Our culture dislikes children because the children are missing from it. They’re prevented from existing or aborted, and when they do come we shut them away in daycares and schools and after-school programs and build separate restaurants and hotels for them, so they don’t intrude on the civilized world with their mess and noise and unpredictable chaos.

In the culture we live in, children are an abstract idea. So we have a culture that is becoming increasingly sterile and monotonous as each person retreats further into him or herself, becoming consumed with the self and its desires. Catholicism’s call to embrace life is a radical one. I’m bringing life after life into a world that doesn’t want them here. Sometimes I even doubt if I want them here. And yet, they continue doing what they do best…pulling me out of myself. Pulling me out of my own family. Showing me Christ and myself “in the transformative and redeeming grace of relationships.” They don’t always manage to bring that same grace to everyone they meet, but they do with some. The ones who are open to it. I’ve seen it happen. I’ve heard those words repeated back to me, words that I’ve said so often myself: “I don’t really like children, but yours…”

I used to think that the point of Humane Vitae was to keep souls from sin. I still think that’s part of it, but I’m starting to realize that life brings forth Life. By the simple fact of their existence, children can suck out selfishness and replace it with compassion, generosity, and joy. Our culture needs more children, filling up the sidewalks and clogging up the coffee shops, even if everyone dislikes them at first. Because everyone will dislike them at first.

April 8, 2013 Living the Life You Have
Recent Comments
0 | Leave a Comment
"So what you're really saying is that you use NFP because you don't want to ..."
Naters The Super Suckage of NFP
"I'm sorry, but planning pregnancy involves using birth control. did you miss that memo?"
leesa maire All Parenthood is #UnplannedParenthood
"Without knowing that God has a purpose for everything, my sufferings in life would be ..."
Jim J. McCrea Sentimental Claptrap, Part V: God Has ..."
"Has the photo been changed? Because what's at the top right now is photo of ..."
Evelyn Sex Breasts and Babies
Browse Our Archives
Related posts from Barefoot and Pregnant