Why Thomas the Tank Engine is a Commie Plot

Why Thomas the Tank Engine is a Commie Plot September 4, 2013 Calah Alexander

I have all these deep thoughts I’ve been thinking about the post I wrote last week, combined with even deeper thoughts sparked by a comment thread happening on that silly Walk Feminine post. But all these deep thoughts are still percolating in the realm of thoughtful thinking and haven’t actually transformed into words with syllables, much less a coherent grammatical structure, so today I’m going to tell you why you should immediately stop letting your kids watch Thomas the Tank Engine. 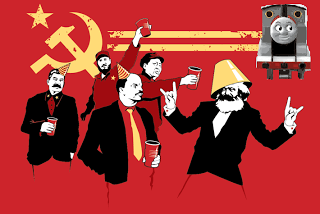 I’m so not even kidding, y’all. Thomas the Tank Engine is totally a commie plot.

Listen, I used to be just like you. Another college-educated young mom (or dad, which I never was, but something something inclusive language) who thought that Thomas was not only harmless (no violence!) but also not irritating (no songs that make you suicidal! (I’m looking at you, Little Einsteins)). Plus it taught the kids morals, right? I mean, some engine or other was always doing something naughty and having to learn not to do that naughty thing, so, morals.

Actually, I was so pro-Thomas that when I was pregnant with Charlotte, the Ogre and I took Sienna to see Thomas the Tank Engine Live! in Las Vegas.

I was so excited as I watched Sienna drink her Sprite in big gulps, her eyes getting wider and wider as the audience filled up and the lights dimmed, until finally I thought they would pop right out of her head when the stage lights blazed and the curtain came up.

The first 30 seconds were all I had hoped they would be. There was a giant, life-size Thomas, and all these pinstriped, dancing conductors, and they were all merrily singing —

“Wait, what?” the Ogre whispered. “What the crap? Why is the chorus repeating how useful Thomas is?”

I looked at him, a little stricken, recognizing the beginning of an I-read-too-much-into-everything-and-ruin-everyone’s-fun-because-that’s-what-I’m-paid-to-do-and-I-like-it-that-way academic fit. “Oh, you know. I mean, that’s what the show’s about, because they’re trains, so they have to do what they’re built to do. And since they’re trains, their goal is to be useful.”

The Ogre’s beard glowered as he answered, “that’s *redacted* communism.”

Oh crimeny, I thought, this is awful. Now he’s totally going to ruin this whole thing by seeing Red Ivans behind every train in Sodor. Curse you, literary theory! Curse you forever!

To his great credit, he held his tongue and even managed some smiles for Sienna, who was visibly transported by the endless chorus of “Thomas is a Really Useful Engine.” But his beard continued to glower in disapproval.

When we got home, he said, “no more Thomas.” Having learned by now that arguing with an academic is a Sisyphean blunder, I got all whiny and morose and pouted for a week. Which was clearly my only option.

But during that week, I actually thought about how much I myself recoiled at the live dramatization of usefulness as the highest virtue. It never bothered me too much in the show, but if I’m being honest, I never paid that much attention to the show. Sienna liked it, it kept her occupied, and the snatches I caught in between dusting and ironing* weren’t actually enough for me to grasp the nature of the show.

So I watched a few episodes on my own. And I. Was. Horrified.

The argument I made to the Ogre held no water against the rampant communism happening in Sodor. And furthermore, the idea that because the show is about trains it must necessarily focus on virtues specific to trains is patently absurd, and antithetical to one of the principles of children’s literature.

Why do we anthropomorphize anything? It’s not to teach our kids more about the thing that we chose to anthropomorphize, otherwise The Lion King would have ended with Simba eating Timon and getting gored to death by Pumbaa, while Sarabi turned over her lady-lion-bits to Scar and then hunted him up a nice hyena. (Preferably the one voiced by Whoopi Goldberg.)

We anthropomorphize things for a zillion reasons, but I believe the main reason is to teach us more about ourselves. To reveal aspects of human nature by putting it in a different context.

Let’s be very clear about this: there is no reason to give Thomas the Tank Engine and all his friends human characteristics, emotions, motivations, and even faces except to teach small children something about being human. And what they are being taught, episode after wretched episode, is that the highest good is usefulness.

And not even general, across-the-board usefulness. Not success, to put it another way, or even achievement. Rather than encourage children to reach beyond their boundaries and try something difficult, Thomas teaches kids that trying something you’re not already good at (or that you weren’t “made for”, in the language of Sodor) is inherently wrong. A common motif is some poor engine or other wanting to try and do something different, something he sees another engine doing…but because he’s not made for that task, he fails horrifically. He’s not useful, because he’s attempting to accomplish a task he isn’t suited for. In the end, the engine usually learns the important lesson that he should not try to overcome obstacles, but should accept his limitations as absolute.

This is pretty horrible stuff to teach kids. I’m not even going to go into the fact that the useless engines (mostly composed of engines who step out of line or who are dumb and get lost a lot) get scrapped. Yeah, for real. Scrapped. Here’s an idea for Lego: an Island of Sodor Scrap Yard, where your son’s lazy Daisy can be dismembered and compressed. I mean, this is a kids’ show, and the moral of every story is “do exactly as you’re told or you will be recycled and replaced.” Communism aside…really?

If I haven’t convinced you get that Thomas the Tank Engine is evil incarnate, here’s a little gem of a plot point, especially for parents of pretty pretty princesses. In “The Sad Story of Henry,” a train who is thrilled with his pretty green paint with red stripes runs into a tunnel to hide from the rain, so it doesn’t ruin his paint. He refuses to come out, even after the rain stops, because he doesn’t want his paint to get ruined. Finally, Sir Topham Hatt (whose real name, by the way, is the Fat Controller) orders the tunnel to be bricked up with Henry still inside.

Not sadistic enough for you? Sir Topham Hatt leaves enough room at the top for Henry to see all the other engines being useful and happy, but he runs out of steam so he can’t talk to them, and the soot from the tunnel ruins his paint. And that’s how the episode ends.

As the wife of an academic, I’m wary of people who are constantly reading “feminism” or “Marxism” or “queer theory” or, God help us, “post-colonialism” into every nook and cranny of human existence. But in this case, there’s no reading into anything. Thomas the Tank Engine is communist propaganda at it’s boldest, and I’m not the only one who’s noticed. I think the only reason it took me so long to see is that non-Disney children’s cartoons just aren’t the place where I expect to encounter indoctrination. To that end, I developed this handy-dandy checklist for all discerning, non-communist parents.

You’re welcome. I’m working on developing one for feminism next, along with female exploitation (hint: this one will include a single box labeled “Was it made by Disney?”), just as soon as I get this tinfoil hat off my head.

It seems to be stuck.

*This is clearly a gross exaggeration. I never iron. I suppose maybe she watched it while I dusted once, but I’m pretty sure the rest of the time I was reading Twilight. Again.

September 5, 2013 We Need Words to Hold Us
Recent Comments
0 | Leave a Comment
"So what you're really saying is that you use NFP because you don't want to ..."
Naters The Super Suckage of NFP
"I'm sorry, but planning pregnancy involves using birth control. did you miss that memo?"
leesa maire All Parenthood is #UnplannedParenthood
"Without knowing that God has a purpose for everything, my sufferings in life would be ..."
Jim J. McCrea Sentimental Claptrap, Part V: God Has ..."
"Has the photo been changed? Because what's at the top right now is photo of ..."
Evelyn Sex Breasts and Babies
Browse Our Archives
get the latest updates from
Barefoot and Pregnant
and the Patheos
Catholic
Channel
POPULAR AT PATHEOS Catholic
1

A Virus of a Film: A...
Steel Magnificat
Related posts from Barefoot and Pregnant