So last week, Addie Zierman wrote this great post in WaPo about the churchy phrases that are scaring away millennials. I’ve always been skeeved out by those exact same phrases, so I read the post with gusto. Good points, I thought, and yet…

I wasn’t satisfied with the idea that these clichéd phrases were just overly simple, vaguely creepy, and laden with poor connotations. That doesn’t explain the way they make me want to pull my own hair out and shove it down someone’s throat. There’s something genuinely wrong with these phrases: they present sentimentality as truth.

They’re not comforting, they’re not convincing, they’re not even really sensible. They are dismissive platitudes that don’t require the intellectual risk of questioning, the emotional risk of loving,  or the spiritual risk of doubting. They make us feel patronized, infantilized, and profoundly unloved. Millennials see this crap and go, “yeah, the rest of it must be lies too. Imma go hang out with PZ Myers now. He may be vulgar, but at least he tells it like it is.” That’s why I left church after high school, along with some of my closest friends. And, really, can you blame us? When we were seeking truth, we got Hallmark cards and a pat on the head.

I’m well aware that most of the people who say these things are good-hearted, well-intentioned people who probably think they really are speaking truth in love. Unfortunately, as I’m fond of reminding the internet, the good intentions of the speaker rarely change the meaning of their words or the way those words are understood. Since I love deconstructing things, I’m going to take these “churchy phrases” one post at a time and explain, in excruciating detail, why they are the worst kind of sentimentality. In masquerading as truth, they actually obscure it.

In college, those godforsaken papists offered a class called “The Bible as Literature.” In this class, they actually studied the Bible as if it were literature, instead of the divine word of God. This was before I went over to the dark side, so obviously I didn’t take it, but some of my friends did. When I asked what kind of stuff they were studying about the Bible, my whole universe imploded.

They could have re-named the class, “The Class Where We Set Fire to the Foundations of Evangelical Reality.” I kept trying to frantically insist that it was the Word of God and these things couldn’t be true, or if they were, maybe we should just ignore them and trust that the Holy Spirit spoke through the writers of the Bible in contemporary American English, specifically the language of the NIV. But my friends relied upon irritating things like historical evidence and discrepancies in translation and even a record of deliberate changes made by Luther himself to convince me.

The books of the Bible were written millenia ago. Of course they were inspired by God, but they were written by people. And they were translated by people. And people like King James commissioned special translations with subtle changes that would reinforce his political agenda by upholding the episcopal structure of the Church of England. And people like Luther just took whole phrases out because he didn’t like the implications. So what we’re reading is the inspiration of the Holy Spirit, muddled by thousands of years of human error. I believe that the Spirit protects it from total overhaul, but if the Reformation taught us anything, it’s that religions can rise and fall on the turn of a single phrase. (A phrase which, by the way, isn’t even in the Bible. Not even Luther’s version.)

Translation errors aside, though, anyone who says, “the Bible clearly says…” as if that settles the matter clearly hasn’t read the Bible. The Bible contains more contradictions than it does unpronounceable names, and that’s quite a feat. Additionally, it’s nothing short of a complete denial of reality to discount the vast differences between the cultures the authors were writing for and modern day America, as if those differences don’t matter.  Remember this song?

Remember the endless confusion amongst adolescents and their parents about what the heck that lady was saying? Because it couldn’t be pissing, right? I mean, what does that even mean? He was just peeing all night? Because he drank so much, maybe, so he had to go to the bathroom a lot, and maybe that’s why he got knocked down or something? I mean, what?

Straightforward slang for Brits was a completely inexplicable word choice for Americans, and that’s just between two contemporary cultures who speak the same friggin’ language, for crap’s sake. Multiply that by a significant portion of human history and factor in languages who don’t even have common evolutionary roots, and I think it’s safe to say that we might not ever really understand some of the stuff in the Bible.

But what gets me the most about this one is the nature of the way it’s used. Evangelicals are the primary Christians who say this by far. They tend to say it like it’s a trump card that will win any argument (hint: it won’t). Often, they will refuse to engage in any argument that relies on rational discourse, logical debate, philosophical conjecture, or theological extrapolation because the Bible didn’t say so. Alternatively, they will cut off people who have genuine, complex questions about faith and morality by throwing a Bible verse at them and then absolutely refusing to engage further, because the Bible clearly says.

The Bible does say that God created man and called him good. That includes our intellect. God did not give us the Bible so we could just forget that whole thinking thing. He gave it to us as an aide to our reason, to guide our understanding, not to replace it altogether.

The phrase “think for yourself” has become a cliché as well, but it’s a cliché that says alot about our society. It’s difficult to respect someone who refuses to engage intellectually. When a broad swath of a religion replaces critical thinking with spouting off Bible verses, it’s very easy to dismiss them, and with them, the Bible that they cling to. Staggering numbers of the population, both non-Christian and Christian, think they know what the Bible does and doesn’t say because they’ve heard people saying “the Bible clearly says so” their entire lives. They know what type of person uses this phrase, and they know what that type of person believes, so they think they know what is in the Bible. Truth is literally obscured by widespread cries of “the Bible clearly says!”

In secular society this is at best rhetorically ineffective, and at worst irrevocably alienating, but within the Evangelical community it can take on a kind of Machiavellian genius.   In the mainstream Evangelical tradition there is no recognized authority on what the Bible means. Sure, various branches or denominations or even individual churches might favor one scholar’s interpretation over another, or one random guy with a laptop’s interpretation over Biblical scholars, but the absence of authority means that the Bible can pretty much mean whatever you say it does. It’s generally assumed that if a person is saved, he or she is guided by the Holy Spirit, so the Holy Spirit will do the explaining.

This goes so far beyond obscuring truth that it’s almost impressive. As I understand it, the relationship between Christian brethren* should be one of mutual seeking. You ought to approach another pilgrim on the journey with good will and a good heart, and the very first thing you ought to do is really listen. If you really listen, you will be able to meet them where they are, entering into their confusion, doubt, perhaps even pain, and finding the words to work through it with them, the words they will understand. If you are really loving someone correctly, you’ll know if they are in a place where quoting Scripture would shut them down, and you won’t do it. You certainly won’t shove their faces in Scripture, invite them to an altar call, and tell them sadly that you’ll be praying for them, because that does absolutely nothing in service of the truth. It does, however, do a fair amount to push people away from truth.

I can’t think of an instance where someone has used this phrase and been genuinely concerned about the Bible and what it says. I may have a terribly selective memory, but every time I can recall hearing it, the goal was either justify themselves or prove someone else wrong. They may have been right, and the other person may have been wrong, but if the only way they know how to prove it is to throw the actual Book at someone, something vital is being lost in translation. And I’m pretty sure it’s not the Bible.

Stay tuned tomorrow for Part II, my personal rage-inducing anti-favorite, “God will never give you more than you can handle.”

*And sistren? Can we make sistren a thing?

November 14, 2013 Sentimental Claptrap, Part II: God Will Never Give You More than You Can Handle
Recent Comments
0 | Leave a Comment
Browse Our Archives
get the latest updates from
Barefoot and Pregnant
and the Patheos
Catholic
Channel
POPULAR AT PATHEOS Catholic
1

It Begins With Wine at a...
Steel Magnificat
Related posts from Barefoot and Pregnant 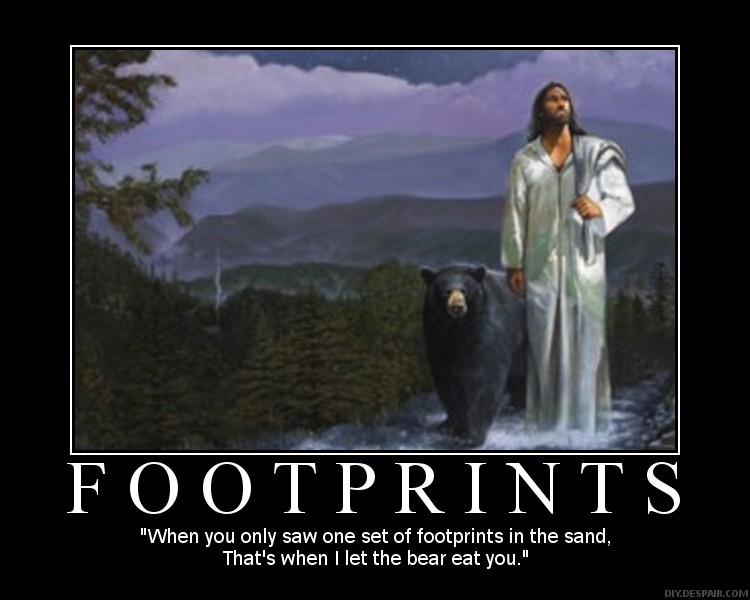