“We are doomed to be left behind…”

One of my favorite college professors from UD posted a status update about how her efforts at raising money for Chernobyl poet Lyubov Sirota have fallen far short of her hopes, and how horrible it has made her feel.

I confess that I have never heard of Lyubov Sirota until today. I immediately googled her name and found a brief synopsis of her story by Paul Brians at Washington State University, along with some translations of her Chernobyl poetry. She and her young son Alex (called Sasha) were living in Pripyat when the Chernobyl reactor exploded.

They were severely afflicted by radiation poisoning and spent years trying to rebuild their lives in a strange land. At long last, Lyubov found a kind of peace with fellow poet Victor Grobovsky. Together they managed to buy a small cabin near Pripyat for her grown son Sasha, and bought themselves a small apartment in Crimea.

Less than a year later, the violence in Crimea has driven Lyubov and Victor from their home.

So now, twenty-eight years after being evacuated from Pripyat, Lyubov Sirota is homeless again, and back on the border of the Chernobyl Exclusion Zone.  She cannot go back to Crimea; she has lost her savings, for she and Victor do not know what will become, what has become, of their little apartment in occupied Crimea; their son’s two-room cabin is not big enough to accommodate his wife and child, and his parents, too.

One of the things about struggling with anxiety and depression is that it locks you in. I have been so locked into my own struggles this Lent that I haven’t really given much thought or energy to anyone else. That’s the paradoxical thing about mental illness; it feels so lonely to be battling against my mind, but the truth is that I create my own isolation by ignoring everything else. I guess that’s why this stanza of Lyubov’s poem “To Pripyat” really struck me (and not in the poetic sense — more in the “punch in the face” sense).

We’ve stood over our ashes;

now what do we take on our long journey?

The secret fear that wherever we go

The sense of loss

that revealed the essence

of a strange and sudden kinlessness,

showed that our calamity is not

. . . We are doomed to be left behind by the flock

But when you fly off

don’t forget us, grounded in the field!

And no matter to what joyful faraway lands

your happy wings bear you,

may our charred wings

protect you from carelessness.

I hope I have not become the kind of person who can remain unmoved by the suffering of others. In a sense, this cause is far from the ones that have recently been on my mind…the deaths of Olivia and Emma Lewis, the death of Nathan Trapuzzano, Robin’s struggle to support her family. It seems so exotic, so foreign, the displacement of a Chernobyl poet (and even that combination of words, Chernobyl poet, how strangely it falls from my fingers) this second time by Euromaidan. It seems disconnected to my reality.

There are only ten more days left in this campaign, ten more days to raise the necessary funds for Lyubov to have a home. Then, as you can see from the picture, the real work will begin. 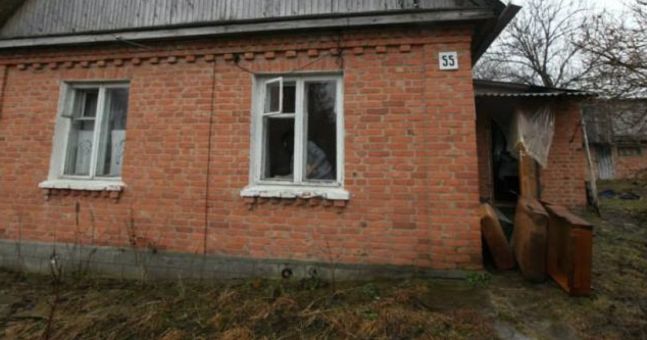 We have a chance to make a real difference in the life of someone who has suffered much, someone who has taken that suffering and made beauty out of it. I think it’s lovely that this is all happening during Holy Week. I have such faith in my brothers and sisters in the Church, and feel sure that you will all give what you can, your prayers not least of all, and help me spread this far and wide so that the words Lyubov wrote after Chernobyl do not become true for her once again.

Let us not leave her behind in the harshest of winters.

Please go here to read more about Lyubov Sirota, and to donate to her cause. Lyubov’s GiveForward will also remain in my sidebar until the necessary funds have been raised. Maybe we can even get her a little more…say, for a toilet?

April 17, 2014 My Dog Ate My Laptop Charger
Recent Comments
0 | Leave a Comment
"So what you're really saying is that you use NFP because you don't want to ..."
Naters The Super Suckage of NFP
"I'm sorry, but planning pregnancy involves using birth control. did you miss that memo?"
leesa maire All Parenthood is #UnplannedParenthood
"Without knowing that God has a purpose for everything, my sufferings in life would be ..."
Jim J. McCrea Sentimental Claptrap, Part V: God Has ..."
"Has the photo been changed? Because what's at the top right now is photo of ..."
Evelyn Sex Breasts and Babies
Browse Our Archives
Follow Us!