I Actually Lit Something On Fire

Remember how I talked about karma the other day? Remember how when I don’t like something I usually say it should be “lit on fire”? Remember when I actually combined those two things in one post? 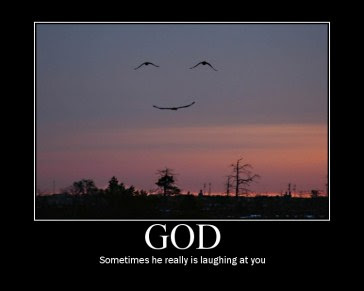 This morning, I was industriously preparing dinner to put in the slow cooker like a good housewife. The sun was shining, I had walked the girls to school then taken the dog for a walk, I had enough time to make the bed before leaving on time for a playdate, and short of cartoon birds braiding my hair and tiny mice sweeping my kitchen, it was a perfect morning.

Then a whole pan went up in flames.

Fire has never happened in my kitchen except on purpose, okay? This was not on purpose.

The flames were enormous, and I was absolutely certain the microwave above the stove was going to melt and the cabinets were going to catch fire. I didn’t know what to do. My brain was only able to come up with 2 salient bits of information:

That was it. That was all I could think of.

I totally understand why people have fire drills and safety plans and emergency exit preparation tattoos, because in the face of unexpected fire we basically resort to being Neanderthals.

This was a watershed moment for me. It was the moment in which I learned why it’s vital not to yell at your children too much, because when I finally took my eyes off the fire long enough to make sure they were running for the door, Lincoln was blinking sleepily and tipping slowly over in his chair, and Liam was all, “Hey Mom, you made a fire!”

By this point I was trying to weigh my options. It seemed to me that the flames were getting bigger, and I didn’t think I had time to google “how to put out a grease fire.” I also didn’t think it would be responsible to abandon a fire that was, at the moment, still contained to the pan (as long as you didn’t count the 6-feet-high flames shooting out of the pan). I needed to get my phone to call the fire department and get the boys out of the house, but my phone and the boys were in opposite directions. My brain’s panic button rendered me absolutely frozen, unable to accomplish either task, and I stood rooted to the kitchen floor, staring at the fire and stammering, for what felt like a century.

It was probably only about 2 seconds, though, before my hand moved — completely independently of conscious thought or intent — and snapped off the burner.

Yeah, that’s right. That whole time that flames were shooting out of the pan like it was a tiny metal Vesuvius, the burner was still on high.

My hand was on a roll, so I kept watching as it slid the fire-making death-pan off the stove and onto a rack on the counter. The flames instantly subsided, and in the course of a few minutes, had extinguished themselves entirely.

I actually stood in the kitchen and watched the flames go out, feeling like I had just conquered some primal force of nature without even meaning to.

After my brain started functioning like a grown-up, though, I immediately ascertained the damage. The microwave was not damaged, thank God, nor were the cabinets, and I scrubbed all the black stuff off pretty easily.

The pan survived, with the help of some steel wool, which is good because it’s my favorite and I use it every day. Dinner wasn’t ruined either, since I hadn’t actually started cooking yet.

My day was shot though, and my nerves frazzled beyond repair. A cup of tea helped me pull it together enough to go to our playdate an hour late, which is pretty standard for me actually, so I had minimal guilt since my excuse wasn’t an excuse so much as a freaking fire.

1) Television can actually save lives. (Thanks, Roswell.)

2) Geico ads are grossly misleading, because cavemen figured out fire, and fire is way harder than the internet. 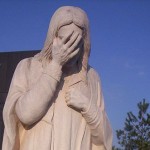 September 8, 2014 Private Revelation and Divine Facepalm
Recent Comments
0 | Leave a Comment
"So what you're really saying is that you use NFP because you don't want to ..."
Naters The Super Suckage of NFP
"I'm sorry, but planning pregnancy involves using birth control. did you miss that memo?"
leesa maire All Parenthood is #UnplannedParenthood
"Without knowing that God has a purpose for everything, my sufferings in life would be ..."
Jim J. McCrea Sentimental Claptrap, Part V: God Has ..."
"Has the photo been changed? Because what's at the top right now is photo of ..."
Evelyn Sex Breasts and Babies
Browse Our Archives
Related posts from Barefoot and Pregnant