So You Think I’m a Homemaker?

So You Think I’m a Homemaker? September 30, 2014 Calah Alexander

Six months ago, I bought a big whiteboard to function as a chore chart.

On Saturday, I finally put it up.

After it was up for 24 hours, I couldn’t handle the big, rectangular blankness of it, so I began designing a chore chart for my wee minions.

The first four drafts were based on Pinterest pictures. After repeatedly measuring, graphing, adding cutesy flourishes and rhymes, and doling out hilariously optimistic chores, I remembered that this was not supposed to be a piece of concept art.

So I erased everything, and came up with something practical. 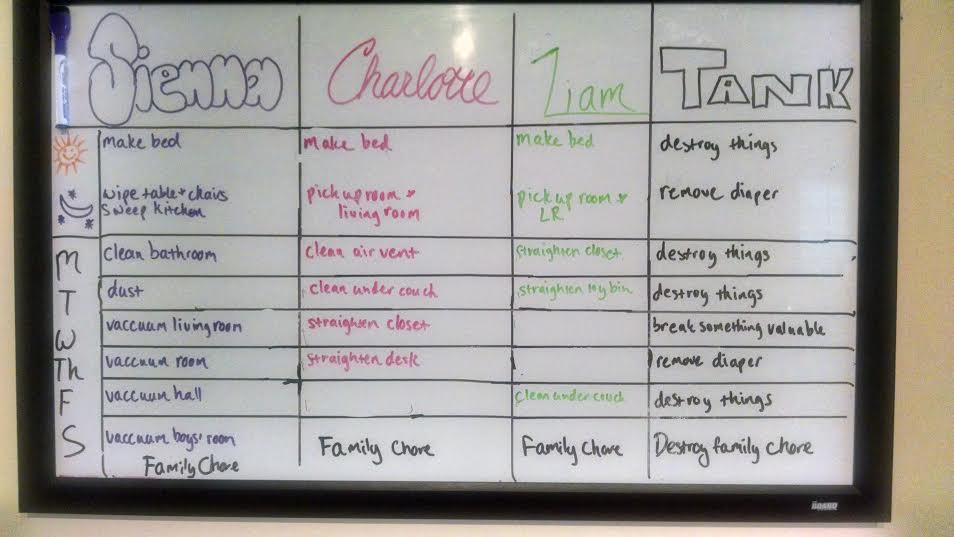 Then things took a turn for the less magical. Charlotte eventually did her afternoon chore, and with only a medium amount of wailing — which was still an improvement. Liam did not do any chores except picking up his room, and that was only done under excessively disproportionate threats — which is par for the course.

Lincoln, however, exceeded my wildest expectations, accomplishing not just his morning and evening chore, but all his daily chores through Friday. I spent the entire afternoon cleaning up the aftermath of his absurd overachievement, neglecting my own chores (and my blog, and Facebook).

This morning, no one did any chores, and I didn’t remind them. Chore charts are great and all, but they seem to require a lot of input effort before you get any output. I don’t really have the energy for that, since all of mine is focused on surviving until bedtime, then watching Doctor Who.

I know some women swear by chore charts. Some women also make homes the way composers make symphonies, weaving the various musician-children together into a harmonious whole, keeping each one hitting the exact right note at the exact right time, while knitting Paleo dinners and pinteresting their lives for posterity. Those women absolutely are absolutely homemakers. They deserve that title. They make beautiful, functional homes and they are rightly (if irritatingly) proud of it.

Then there are women who stumble into motherhood the way I accidentally stumbled into an Insane Clown Posse concert that one time. There’s no making harmony out of this nonsense…we just gotta find a safe corner to hole up in until everyone passes out and we can make our escape. I call us “homesurvivors.”

We don’t run away, so we get points for that. We are here, day and night, surviving the spills and the vomit, and sometimes even cleaning it up. Sure, we may not have chore charts that accomplish anything positive, or chore charts at all, or chores at all. We might just throw things into the closet and/or trash can when we get tired of stepping on them. We might not knit pint-sized scarves or feed our children a perfectly balanced hunter-gatherer diet, but we manage to feed them food and keep clothes on 80% of them 80% of the time. Plus, we do all that while making sure our psych meds don’t run out. That’s pretty damn impressive, actually. And who needs pinterest when you have facebook?

I’m not knocking homemakers. Homemakers are like unicorns…you think they’re a myth until you meet one, and then you can’t stop crying because it’s so beautiful and clean! 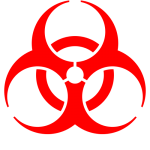 October 2, 2014 Ebola Anxiety
Recent Comments
0 | Leave a Comment
Browse Our Archives
get the latest from
Barefoot and Pregnant
Sign up for our newsletter
POPULAR AT PATHEOS Catholic
1

From Founding a Startup to Deloitte...
Through Catholic Lenses
Related posts from Barefoot and Pregnant