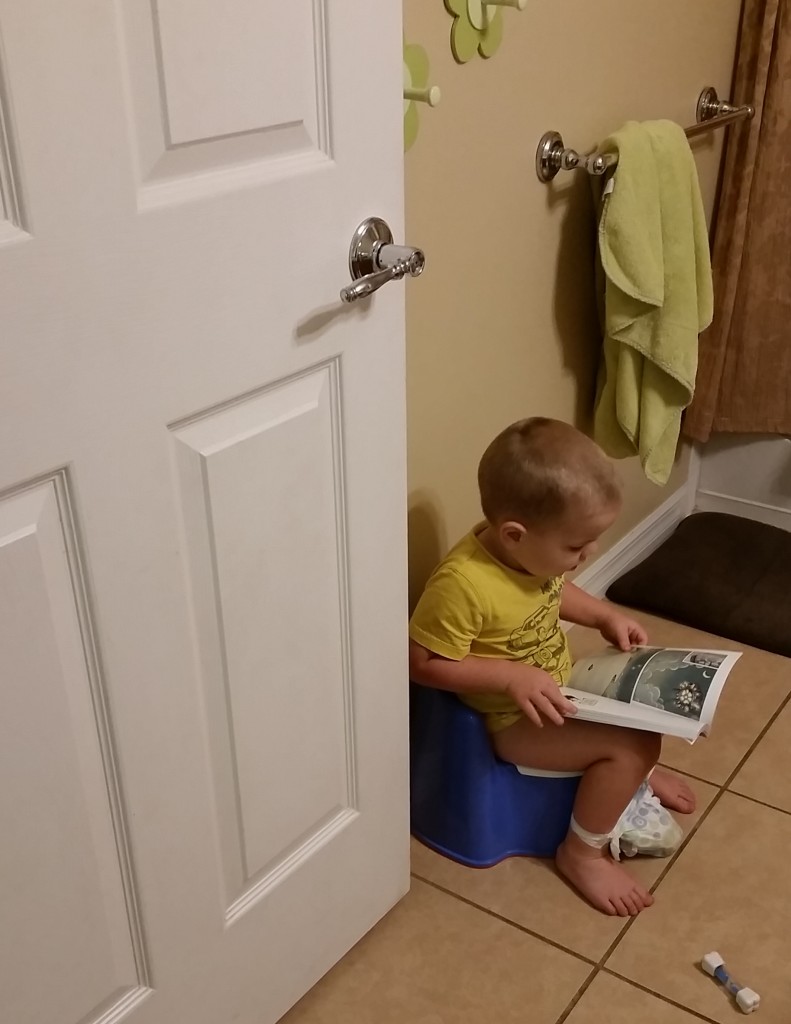 First, there was all kinds of crazy stuff going on with the selling of the house (the bold is the best I can do to communicate the doomsday music that plays in my head every time I think about it). Then there was a very long conversation with a student loan company, wherein I spent over an hour trying to convince the woman that just because our income is too low to qualify for an income-based repayment program, that doesn’t mean paying the balance in full is a viable option. We finally settled on a $5 monthly payment plan, after repeated tangents about the number of children we have. (I may have pantomimed repeated punching after the third confirmation of “five, yes, five, yes, I know that’s quite a few, no, I don’t think it’s too many”)

But the true test of character came near the end of the day, while I was browning beef and sauteeing onions for the chili. Over the sound of simmering, I heard an ear-splitting fart. Frantically, I called out for Lincoln, who is in the throes of potty-training and has not quite mastered it. He ran in from his bedroom and said, “yeth, Mom?” Still stirring, I asked him if he had had an accident. He looked at me in confusion and said, “no.” I turned him around, stopped stirring long enough to give his butt a quick sniff, and then turned back to the stove and took a deep breath.

I knew the sound hadn’t come from Lincoln the second he appeared from his bedroom. The noise had come from the living room, and there was exactly one person in the living room. I’ve had enough babies by now to know what it means when a baby’s butt achieves that decibel.

Knowing I would soon be up to my elbows in excrement, I turned the burners off and slid the pans back onto the cool surface. Steeling myself, I walked over to Stormy, who was reclining on his Boppy lounger. When he saw me, he started kicking and cooing excitedly, seemingly oblivious to the yellowish-orange sludge leaking out around his back and legs.

I stood still for several seconds, whipping my head back and forth between the poop-covered baby on the changing table and the poop-time-bomb clutching his derriere in the doorway. Finally I said, “Okay, Linc, listen to me very carefully. You must go straight to your little potty, take your underwear off, then sit down and poop. Now this part is important: DO NOT GET UP UNTIL I COME WIPE YOU. Do not try to dump the little potty into the big potty. Do not try and put your underwear back on while pooping. Do not touch your poop or bring it to show me, even if it’s very big. Just poop, and wait. I’ll be there are soon as I can. Now go. NOW. Stop dancing and GO!”

Clearly, you can see how potty training is going. I despise potty-training, for this exactly reason. I am an avowed potty untrainer, which is a phrase I made up so my unabashed laziness sounds legit. But seriously, dealing with diapers is easy. Even when the poop gets smelly and sometimes I have to duct tape the diaper closed, it’s still a contained biohazard. Potty-training absolutely annihilates this one, essential advantage.

Let’s be honest, those little training potties are. the. worst. It’s not that bad when the kid just pees, because you can dump that shiz in the big toilet, give the thing a quick Clorox wipe-down, and be on your merry. But when it’s actual shiz, what are you supposed to do?!

This is probably the greatest dilemma of my adult life. Do I leave a small amount of water in the potty, so it’s easier to dump the poop out? Is it worth the risk, leaving an enticing half-inch of water in a place easily accessible to both toddler and dog? Or do I leave it dry, so no one plays with/licks the potty (*vomit*), then dump what poop I can into the big toilet and scrub everything else out with an entire container of clorox wipes and some straight bleach afterward, just to be on the safe side? I mean, how clean is too clean, when you’re talking about a receptacle for human waste that is small enough for a toddler to play with, yet large enough to somehow trip every other child in the house?

My preference is to wait until the child is tall enough to use a stool and smart enough to not fall in, and then move them straight from diapers to the actual toilet. Only one of my children has ever fallen in (repeatedly), and that was totally on her. So this method usually works for me.

Except that Linc is very short, yet very sturdy. So while he cannot possibly climb onto the potty, he’s already outgrown the biggest size diapers.

Therefore, we are in potty training purgatory.

Once I finally got Stormy cleaned and changed and washed my hands eleven times, I headed into the bathroom.

Much to my delight, Lincoln was sitting patiently on his little potty. “Are you done?” I asked. “Yeth,” he said.

My heart skipped a beat. “Um, what? Did you try to wipe yourself? IS IT ON YOUR HANDS?!”

He looked at me in confusion. “No. I put it in the potty.”

I raised him up a little and peered into the shallows of the evil plastic potty. No toilet paper. Whew, I thought. Then I wiped him, lifted the plastic insert with one hand and raised the toilet lid with the other hand, and dumped the whole thing into the water. Then I flushed.

To my horror great, billowing clouds of toilet paper began to rise up from the depths of the toilet. The water did not circle and drain — it kept rising. More and more whitish, half-disintegrated Charmin joined Lincoln’s poop and the completely reasonable amount of toilet paper I had used to wipe him, creeping up the sides of the toilet, to the lip, up the lip, and then —

I actually screamed, because let’s be honest, this situation is 1000 times scarier than any horror movie.

I just shook my head, shooed him out of the bathroom, crammed the rattiest beach towel we owned around the base of the toilet, and walked out, shutting the door behind me.

Then I grabbed Stormy, Lincoln, and a bottle of wine, and went next door.

Nothing says “adulting” like waiting for your husband to come home and fix the problem, after all.

April 11, 2016 If You're Wondering How My Whole 30 Is Going
Recent Comments
0 | Leave a Comment
"So what you're really saying is that you use NFP because you don't want to ..."
Naters The Super Suckage of NFP
"I'm sorry, but planning pregnancy involves using birth control. did you miss that memo?"
leesa maire All Parenthood is #UnplannedParenthood
"Without knowing that God has a purpose for everything, my sufferings in life would be ..."
Jim J. McCrea Sentimental Claptrap, Part V: God Has ..."
"Has the photo been changed? Because what's at the top right now is photo of ..."
Evelyn Sex Breasts and Babies
Browse Our Archives
get the latest updates from
Barefoot and Pregnant
and the Patheos
Catholic
Channel
POPULAR AT PATHEOS Catholic
1

Abuse, the Rosary, and an Old-Fashioned...
Steel Magnificat
Related posts from Barefoot and Pregnant