The Anthem’s Racist Lyrics: “No Refuge Could Save The Hireling And The Slave”

The Anthem’s Racist Lyrics: “No Refuge Could Save The Hireling And The Slave” August 30, 2016 Martin Hughes

One of the things that this Colin Kaepernick fiasco has done is prompted me to take a better look at the national anthem.

There’s a part of it that actually never gets sung:

And where is that band who so vauntingly swore,
That the havoc of war and the battle’s confusion
A home and a Country should leave us no more?
Their blood has wash’d out their foul footstep’s pollution.
No refuge could save the hireling and slave
From the terror of flight or the gloom of the grave, —

What the hell is that about?

Well, I read about it — and apparently there were some slaves who fought on the British side in the War of 1812, cuz the Brits were promising their freedom.

Awesome, right? If I would have been there, fuck patriotism. I wouldn’t feel patriotic at all, picking all that cotton — first chance to get on a British ship I could get, I’d take. As would you.

So they totally found their way to British ships, and the slave men fought for the Brits in exchange for no longer having to wear their chains — and their families not having to either.

They fought in that battle of 1814 that Francis Scott Key was singing about. Yeah. In the regiment The Colonial Marines.

That same one that involved “the rockets red glare.”

And so…the battle likely killed some of them.

Then Key got all inspired and shit and that beautiful sight, I guess, prompted him to jot off that song that’s become our anthem for whatever twisted reason. Like, that verse was STILL FUCKING IN THERE in 1931, when it became our national anthem.

After the war, the United States wanted its slaves back — some 6,000 men, women, and children. And Britain was like, “Hell no, you ain’t getting these slaves back. They fought and died under your rockets’ red glare and all that; we’re gonna show them what freedom looks like.”

And then the former slaves went to Canada, Trinidad, etc., and to this day their descendents are known as “Merikans.”

Now, Francis Scott Key himself was no saint. He was a racist, slave-owning asshole who went around saying some bullshit, like that thing about black people being “a distinct and inferior race of people, which all experience proves to be the greatest evil that afflicts a community.”

Oh, it gets worse.

He became a slave owning, racist, black-deaths-rejoicing district attorney in 1833.

This guy, who said that black people were “the greatest evil that afflicts a community” became a fucking district attorney.

As the book Snowstorm in August by former Washington Post reporter Jefferson Morley puts it, the police in Key’s part of town would steal from black people as they wanted, and just disregard their rights like clockwork. One night, they tried to attack this black woman, and she got away, crossed a bridge — then fell off the bridge into the Potomac below, and drowned. She was silently buried (no, her name wasn’t Sandra Bland; wrong century).

An abolitionist paper wrote, ““There is neither mercy nor justice for colored people in this district. No fuss or stir was made about it. She was got out of the river, and was buried, and there the matter ended.”

And Key prosecuted the cops? No. Course not. This proud writer of the national anthem, home of the free and brave and all that, said that abolitionist paper was going out of its way “to injure, oppress, aggrieve & vilify the good name, fame, credit & reputation of the Magistrates & constables of Washington County.”

Further evidence that black people are “a distinct and inferior race of people…the greatest evil that afflicts a community.”

Not convinced? Well, after he wrote this:

No refuge could save the hireling and slave
From the terror of flight or the gloom of the grave,

His VERY NEXT LINES were this:

And the star-spangled banner in triumph doth wave
O’er the land of the free and the home of the brave.

How the? What? How is that free? How the hell do you sing about slaughtering slaves proudly and then sing about protecting the home of the free and brave you racist, slave owning, bigoted — how does that happen? How does that make sense?

It doesn’t make any goddamn sense at all. That song does not represent me. That definition of “freedom” does not represent me. I am better represented by the 6,000 slaves that this song goes out of its way to exploit, by the black men and women Keys went out of his way to insult, by that woman buried in a grave that he disregarded, than I will ever be by such a bullshit anthem written by such a racist asshole of a man. Sorry, but not sorry. Go cry about it somewhere else through your teary-eyed illusion.

And maybe someday we’ll get past that. And we’ll recognize freedom. But when there is mass inequality in the United States of America — the only thing that anthem should be doing is reminding us how goddamn inconsistent we are, and have been since the beginning of ever in America, when it comes to upholding this “land of the free and the home of the brave” bullshit.

And the best way that can be done, I’m seeing, is by doing something that few of us have the guts to do, because it has been so inculcated into our culture that we’re not supposed to commit this slight of tremendous magnitude — and that is to stay seated during the pledge, as Kaepernick has done. 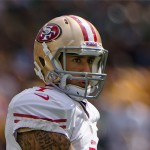 August 30, 2016
"It's His Girlfriend" and "He's A Muslim" Attacks on Kaepernick are Proof We're Racist and Sexist
Next Post 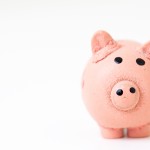 September 1, 2016 How can Kaepernick's "pig cop" socks be anti-cop if he has cop friends?
Recent Comments
0 | Leave a Comment
Browse Our Archives
get the latest from
Nonreligious
Sign up for our newsletter
POPULAR AT PATHEOS Nonreligious
1

The Ongoing Catholic Scandal: What the...
Roll to Disbelieve
Related posts from barrier breaker