These chapters (and 39) are all focused on Corianton, who gets quite the paternal talk. Assuming that these chapters aren’t using Corianton merely as a framework to talk doctrine (i.e. why would this all be recorded, or is Mormon expanding it?), we can guess that Corianton hadn’t understood some things, such as the resurrection, justice, mercy, atonement.

What do we know about Corianton?

One thing is that he must have been relatively young, although what that means in a Nephite context, who knows (Teens? Early 20s? 30s?) He can’t be too old, because Helaman is the oldest and Helaman is still  “in his youth” according to Alm 36:3.

By leaving the ministry and going after the harlot(s), he’d undermined the whole operation. (And again, see Mike Ash’s important article on this.)

“Behold, O my son, how great iniquity ye brought upon the Zoramites; for when they saw your conduct they would not believe in my words.”-Alma 39:11.

In a way, young Corianton was like his Dad Alma2. It’s very appropriate for Alma to talk about mercy and atonement because he knew it firsthand from his own unusual experience.

In fact, what we have here is not two, but three generations of rebellion, repentance, and redemption.

Remember the origins of Alma Sr., as a (presumably) wicked priest of wicked king of Noah who repents and must go into hiding.

Then, his son Alma Jr. who rebels, undermines the whole Church with the sons of Mosiah, but then sees the angel, is unconscious for several days, and has a change of heart. These are Corianton’s father and grandfather.

With that background, Alma 39-42 aren’t just a lecture on theology from a monk or academic who studies scripture. This is a father speaking with “all the feelings of a tender parent” (1ne 8:37), and one who’s been on the other side, so to speak. Alma knows the spiritual pain of rebellion and the joy of redemption that the atonement can bring.

“My soul hath been redeemed from the gall of bitterness and bonds of iniquity. I was in the darkest abyss; but now I behold the marvelous light of God. My soul was racked with eternal torment; but I am snatched, and my soul is pained no more.”-Mos 27:29

Alma2 calls it the plan of mercy (42:15, 31) and is the only one to ever use this phrase in the Book of Mormon. It speaks to his experience and understanding.

Now, two further observations. Before Alma teaches the atonement, he goes back to the Fall. This is also how things work in the temple. We begin with the creation and the fall. Unless we understand the state we’re in, we don’t know why we need the atonement and the mercy that it makes available.

Second, salvation is an individual affair. Each individual needs to have a born-again experience like the people of King Benjamin. Having seen themselves in their true state, they cried out for redemption and atonement.

“And they had viewed themselves in their own carnal state… And they all cried aloud with one voice, saying: O have mercy, and apply the atoning blood of Christ that we may receive forgiveness of our sins, and our hearts may be purified; for we believe in Jesus Christ, the Son of God, who created heaven and earth, and all things; who shall come down among the children of men.”-Mos 4:2

The result of this clarity of self-perception is a

“mighty change in us, or in our hearts, that we have no more disposition to do evil, but to do good continually.”- Mos 5:2

Returning to Corianton, he apparently had some kind of change of heart, though whether here as a result of Alma’s talk or that and other experiences, I don’t know. We are all Corianton, typologically speaking. We’ve all blown it spiritually at some time in our lives, as have our parents and grandparents. Through the mercy and power of atonement, we also can endure faithful to the end.

What do we know about Corianton afterwards? Note his presence in these passages.

there was continual peace among them, and exceedingly great prosperity in the church because of their heed and diligence which they gave unto the word of God, which was declared unto them by Helaman, and Shiblon, and Corianton, and Ammon and his brethren, yea, and by all those who had been ordained by the holy order of God, being baptized unto repentance, and sent forth to preach among the people.- Alma 49:30

AND it came to pass in the commencement of the thirty and sixth year of the reign of the judges over the people of Nephi, that Shiblon took possession of those sacred things which had been delivered unto Helaman by Alma.2 And he was a just man, and he did walk uprightly before God; and he did observe to do good continually, to keep the commandments of the Lord his God; and also did his brother. [The brother must be Corianton, since Helaman dies at the end of the previous chapter.]-Alma 63:1-2, 10

Corianton took stock of his life, and became a force for good. Go and do thou likewise. 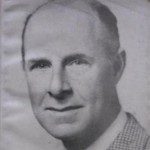 August 3, 2016 David O. McKay, Genesis, and Evolution: Part 2.
Recent Comments
0 | Leave a Comment
"I just completed reading your paper The Israelite Roots of Atonement Terminology. Thank you for ..."
Minette Ngalu Gearing Up For Isaiah
"Even if the Gospels are eyewitness accounts, they are definitely not reliable sources. See here:https://lutherwasnotbornaga..."
Gary M Brief NT Introduction and Gospel Doctrine ..."
"Ben. A couple of comments on your references: ANYTHING by Raymond Brown is excellent. The ..."
CalSailor Virtual Sperry Fireside On Reading the ..."
"This is a great move! Looking forward to using your new website ."
DeAnn Spencer We’ve moved!
Browse Our Archives
get the latest from
Latter-day Saint
Sign up for our newsletter
Related posts from Benjamin the Scribe