Why is 4th Nephi so short? Two interrelated ideas, I think. Remember, Mormon is dependent upon his written sources for writing the Book of Mormon. As Elder Widtsoe articulated, “When inspired writers deal with historical incidents they relate that which they have seen or that which may have been told them [as with written sources], unless indeed the past is opened to them by revelation.” Evidences and Reconciliations, (1960): 127.

Mormon never suggests that he’s drawing any of his information from visions or whatnot, so he’s dependent on whatever written sources he has. It may be that Mormon has less in the way of records or sources to draw on for this period. Secondly, Mormon largely skips over an apparent golden age of about 200 years. There may literally be nothing to write about. Good film and literature, even historical non-fiction, revolves around conflict, change, obstacles to be overcome. (I explore this idea with Abraham and Sarah here.)

If there’s no conflict, no tension, no change, then there’s literally no story. How would it be to read 20 straight pages “and everyone THAT year was ALSO good and kind, and nothing bad happened at all, because they were all true disciples of Jesus.” I’d rather we double the Isaiah chapters 😉

So, what happens to this golden age utopia? Is it destroyed from the outside? Not really. This is the problem of “the mixed multitude.” Exodus 12:38 (cf. Numbers 11:4) describes how the Israelites left Egypt as a “mixed multitude.” In other words, the Israelites may have left Egypt geographically, but as a group, they brought Egypt with them internally. It’s rarely a question of Us vs. Them, but Us vs. Us, or even I against I. This kind of struggle has been described by poets, humanitarians, and General Authorities.

William Wordsworth— “the world is too much with us; late and soon, Getting and spending, we lay waste our powers;”

Aleksandr Solzhenitsyn— “If only there were evil people somewhere insidiously committing evil deeds, and it were necessary only to separate them from the rest of us and destroy them. But the line dividing good and evil cuts through the heart of every human being.” Although he wrote this about his experience in a gulag labor camp in the USSR, he didn’t see a binary division in people but in hearts.

Elder Neal A. Maxwell called upon Latter-day Saints to “establish our residence in Zion and give up the summer cottage in Babylon.” (see A Wonderful Flood of Light, 47).”

A few notes on language.

4Ne 1:7- The Lord did prosper them in the land. – Use of prosper as a transitive verb is unusual in today’s English. (English reminder. Intransitive verbs cannot take objects, like “I’m sleeping.” You can’t sleep something, you have to put it to sleep. Transitive verbs can take objects, like “I’m eating pizza.”) The Book of Mormon uses it both ways, e.g. Mosiah 2:22, 3 Nephi 5:22 (c.f. KJV Nehemiah 2:20 and 1 Co 16:2). Forms of prosper often occur with forms of bless, and this suggests it is covenantal. Way back in 1Ne 1:9, prospering on the face of the land is connected with blessings for keeping the commandments, and all of this makes sense within Lehi’s covenantal setting in 2Ne 1-4, which strongly echoes the covenantal language of Deuteronomy 28.

Combined with the other language of peace, marriage, fertility, and “being blessed according to the multitude of promises” all suggests the Mosaic covenant. Compare the blessings listed in Deu 28:1-14. This may be why the very next phrase clarifies that they “did not walk any more after the performances and ordinances of the law of Moses; but they did walk after the commandments which they had received from their Lord and their God, continuing in fasting and prayer, and in meeting together oft both to pray and to hear the word of the Lord.” So while the blessings may suggest the covenant of Moses, this suggests obedience to a post-Mosaic covenant. 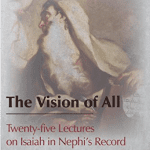 November 26, 2016 BoM Gospel Doctrine Lesson 43-44: Mormon 1-9
Recent Comments
0 | Leave a Comment
Browse Our Archives
get the latest from
Latter-day Saint
Sign up for our newsletter
Related posts from Benjamin the Scribe

The River of Contemplation (Nature and Soul, the...
by Thomas Schenk When I was young, I lived in a house on...
view all Latter-day Saint blogs
What Are Your Thoughts?leave a comment
Copyright 2008-2021, Patheos. All rights reserved.