Update: I’ve put together a collection of samples from these books.

First, note that LDS Perspectives is beginning a string of Old Testament-related podcasts, today with Philip Barlow (Mormons and the Bible), Cory Crawford next week, and me on December 20th, talking about what’s going on in Genesis 1, Moses, and Abraham. I also have a post coming on the early chapters of Genesis, so stay tuned.

When we read the Old Testament, we need several things, like good translations and notes. We need lots of background information on the history and culture (topic of the next post.) But it’s not just data that matters. It’s also our approach, what we’re looking for, what we expect to find, what we think the Old Testament was for, both overall and in its various parts. I suspect many of us are just unaware of how much we bring to our reading and how it shapes our experience.

This is a list of paradigm changers and eye-openers. In some ways, having a paradigm shift is more important than simply having more data, because it completely changes how you view and use the data. Sometimes data alone can lead to a paradigm shift. In my BYU Studies article on atonement terminology in the Old Testament, I recount my discovery of Israelite names meaning “God is my father” (just fine), “God is my brother” (uh, Jesus as elder brother, maybe, kinda?) and then the paradigm-buster, “God is my uncle.” I simply couldn’t fit that into my narrow conceptions, and it pushed me into new territory. So these books don’t go verse-by-verse or even book by book; rather they reshape our general approach, assumptions, and expectations.

In my shortlist, I singled out Misreading Scripture through Western Eyes and Schlimm’s This Strange and Sacred Scripture 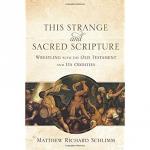 as two must-reads, but in my ideal world, all the books below would be common reading among Mormons, even pre-mission. They’re mostly short (150-200 pages), inexpensive paperback, and aimed at non-specialists, so they’re meant to be accessible. Some longer/deeper volumes come at the end. As always, I neither fully agree with nor “endorse” any of these books, and with one exception, none of them are written by Latter-day Saints; they are fantastically helpful and thought-provoking.

Benjamin Sommer’s recent book Revelation and Authority gets into some of the same area as Sparks, but from a Jewish perspective. Sommer argues for a “participatory model of revelation” in which the human prophetic recipient shapes and influences the revelation, and the implications this has for Jewish law in the Hebrew Bible. As the Amazon blurb says, “Sommer’s book demonstrates why a law-observant religious Jew can be open to discoveries about the Bible that seem nontraditional or even antireligious.” Our conception of revelation contributes to our understanding of scripture, history, and tradition. (See also my presentation on “Truth, Scripture, and Interpretation: Some Precursors to Reading Genesis“)

Happy reading. As always, you can help me pay my tuition here. You can also get updates by email whenever a post goes up (subscription box on the right). If you friend me on Facebook, please drop me a note telling me you’re a reader. I tend not to accept friend requests from people I’m not acquainted with.

December 19, 2017 “That which is Demonstrated, We Accept with Joy”: Mormons, Scripture, and Evolution
Recent Comments
2 Comments | Leave a Comment
Browse Our Archives
get the latest from
Latter-day Saint
Sign up for our newsletter
Related posts from Benjamin the Scribe