This is the first of my Old Testament Gospel Doctrine posts. (Yes, it’s Lesson 3. Mea Culpa.) I’ll be updating my old posts and changing the date on them so they reapper.

Let me explain. No, there is too much. Let me sum up.
Actually, I don’t feel we can even sum up here. There is far far too much to say about the content of these chapters, their interpretation, the reappropriation in Moses, Abraham and the Temple, and nature of the these texts, or explicitly observe in passing the things the manual asserts (like problematic Mosaic authorship), hints at, or ignores (like Joseph Fielding Smith’s strong statements about the nature of the creation accounts)… It seems like nearly every line would require multiple paragraphs. This isn’t an exaggeration, but genuine frustration; when I’ve taught Genesis for Institute, we spend multiple weeks on Genesis 1-3, and my book-in-progress on Genesis 1, I’m trying to keep to under 300 pages.

The manual compresses most of creation into one lesson (!) but spends five lessons on Isaiah. Modern western society has a lot of relevant issues, ideas, and conflicts that revolve around Genesis (science v. religion, evolution, education, the role of men and women, etc.), but comparatively very little in Isaiah. And yet, that’s where the manual spends its time.

But let’s look at relative length, compression, and importance a different way; Christians have traditionally put a lot of theological weight on creation but especially Adam and Eve, and yet they are rarely (if ever) mentioned again in the Old Testament. Creation and fall are given three gap-filled-but-densely-packed chapters, but the story of Joseph in Egypt gets thirteen chapters! (That would be Genesis 37-50, for the full resolution of the story.) What does that tell us? Why so little and so much? Is that simply all they had on creation? Did the story of Joseph in Egypt have more importance than creation for the Israelite prophets? Or is it possible that three chapters is all that was necessary to convey whatever doctrine was intended to be there?

This lesson virtually compels us to take Elder Holland’s advice.

It’s better to take just a few good ideas and get good discussion–and good learning–than to be frenzied, trying to teach every word in the manual. … An unrushed atmosphere is absolutely essential if you are to have the Spirit of the Lord present in your class. – “Teaching and Learning in the Church,” Ensign, June 2007, 91.

So what can we do in 45 minutes? I choose today to focus on two points. I choose these because they

The two points are these.
1) God says several times that creation is good, even “very good.” What does this mean?
2) What does it mean that we are created in God’s image and likeness?

Most LDS interpret “image and likeness” in Genesis 1:26-27 to be about God’s anthropic nature, that humans resemble God in physical plan. This seems to have been general Israelite belief. Marc Brettler says of this passage that

The word tzelem [“image”] elsewhere always refers to a physical representation. For example, the book of Ezekiel uses tzelem when it referes to “men sculptured upon the walls, figures of Chaldeans drawn in vermilion” (23:14) or when it accuses Israel of fornicating with “phallic images” (16:17)…. It always signifies a concrete entity rather than an abstract one. This is not surprising since the Bible (in contrast to most medieval philosophical traditions, both Jewish and Christian) often depicts God in corporeal terms… God is [depicted in Ezekiel 1:26-28]  as a physical being, who has an image in “the semblance of a human form.”- How to Read the Bible, 44.

There’s certainly nothing wrong with this interpretation* but there’s something more that is significant, I think. Among Israel’s neighbors, this kind of language was sometimes used, but only in regards to royalty, not humankind in general. Kings in Babylon, Assyria, and Egypt were said to be the image of deity, and thus functioned as his representative and extension of his power on earth. Genesis thus elevates all of humanity, male and female, black and white, slave and free, to the same level as kings, as representatives of God on earth in a sense. This is a very high view of humanity in contradistinction to some of the cultures around Israel. Hold on to this idea.

Six times in Genesis 1, God pronounces creation or some aspect of it to be good. Significantly, the seventh time, God pronounces creation “very good.” I suspect a profitable conversation could be had over what kind of “good” creation is, or what “good” means here (moral goodness? Aesthetic and beautiful? Functioning as it ought to be?), and whether creation is still “good” in the same way after the events of the Garden, and so on. In his lay commentary on Genesis (currently on sale at Logos for 7.99 along with all the other volumes in the series), John Walton points out that

Ṭob [rhymes with rove and means “good”] is broad enough in Hebrew to extend to the moral/ethical realm as well as potentially serving as a comment on the quality of workmanship, to name just a couple of possibilities. In Genesis 1 the meaning of “good” can be judged by asking what “not good” implies. The biblical text knows of one thing that is not good: “It is not good for the man to be alone” (2:18). If this contrast points us in the right direction, as I believe it does, “good” suggests that a thing operates according to purpose. (NIVAC, Genesis, p. 115)

A comparative approach, as we took with the question of image and likeness, answers the question “what does good mean” in a different and interesting way.  While God explicitly pronounces aspects of creation good and the totality very good, outside of Israel, creation and mankind’s place in it was not always so rosy. In one text, for example, existence belonged largely to deity. Mankind was created because the lowest class of gods no longer wanted to do any work, so humans are created as slaves to serve all the needs of the gods. Humans became too loud, though, and all the gods (with one exception) want them killed. In another text, humankind is created from the blood of a traitorous deity who is slain for his rebellion. If this were a seminar, I’d have to support this point much more, but you get the picture; Genesis takes a very generous view of humanity.

The contrast in both of these aspects is instructive; among Israel and its neighbors, Israelite theology was much more humanistic and favorable to humans and their place in the universe. Creation was good; not only were humans not slaves, but all humans were created in the image of deity, not just royalty.

You [non-Israelite creation theologies] say the universe, and humankind’s place in it, is the result of a struggle between immoral and amoral deities the end-result of which is not favorable to humankind at all; I [Genesis] say that a single all-powerful God created a universe that is good and reflects well on its Creator, who made it as a habitat for humankind, the object of his blessing.

* It would be overreaching to assume “image and likeness” is equivalent to D&C 130:22 from which we learn that “The Father has a body of flesh and bones as tangible as a man’s.” Why? Telling us that God is in human form tells us that he is not a jackal-headed deity, or a winged-sphinx deity. But it does not necessarily tell us that his human form is “of flesh and bones as tangible as a man’s.”  It is possible to conceive of a deity in human yet in some way non-physical form. For more on what the phrase “image and likeness” might mean, see this article about the Tell Fekheriye inscription. The first half is about the implication for what Eden means, the second half on our phrase.

As always, you can help me pay my tuition here, or you can support my work through making your regular Amazon purchases through the book links I post. You can also get updates by email whenever a post goes up (subscription box on the right). You can also follow Benjamin the Scribe on Facebook. If you friend me on Facebook, please drop me a note telling me you’re a reader. I tend not to accept friend requests from people I’m not acquainted with. 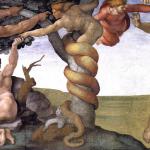 January 26, 2018 Old Testament Gospel Doctrine Lesson 04- Moses 4; 5:1-15; 6:48-62
Recent Comments
8 Comments | Leave a Comment
Browse Our Archives
get the latest from
Latter-day Saint
Sign up for our newsletter
Related posts from Benjamin the Scribe