Here’s the podcast on these chapters, with some useful notes.

The purpose of this lesson is to focus on the friendship between David and Jonathan, but the narrative is primarily about David trying to avoid being killed. The guy trying to kill him is no other than his father-in-law Saul (since he married Michal), who is also Jonathan’s father.  Your in-laws don’t seem so bad now, eh?

Along the lines of “friendship” it’s worth pointing out that Joseph Smith said “Friendship is the grand fundamental principle of Mormonism” (23 July 1843, according to Willard Richards’ diary reprinted in Words of Joseph Smith, 234). James Faulconer explores this idea in Mormonism here.

A few notes (partially repeated from the podcast.)

Two events involve clothing. First, Jonathan gives David his armor and clothing in 18:4. In doing so, he’s effectively abdicating  the throne. He’s putting his royal clothing on David, which presumably includes the royal hem, kind of like royal insignia.

The hem also plays an important role in the Ein Gedi cave episode. David is hiding out in a cave there, and Saul happens to go in to “cover his feet,” a euphemism for “relieve himself” or perhaps “number two.” (As you squat, what happens to your feet? They get covered by your robe…) This is not, as the pre-2013 chapter heading would have it, Saul taking a nap. (For more on chapter headings being wrong, see the podcast notes. EDIT: See the comments for a correction. The old paper heading is wrong, but the 2013 update of the scriptures fixed that.) While Saul is occupied, David creeps up and cuts off the hem of his garment. He now has the hem both of the heir/prince Jonathan and the King. Why is this significant?

The hem of an ancient Near Eastern garment was not simply a fold sewed to prevent the threads of the cloth from unraveling. The hem of the outer garment or robe made an important social statement. It was usually the most ornate part of the garment. And the more important the individual, the more elaborate and the more ornate was the embroidery on the hem of his or her outer robe….

Extra-Biblical texts teach us that the ornate hem was considered a symbolic extension of the owner himself and more specifically of his rank and authority….The legal significance of the hem is frequently demonstrated in the famous archive of cuneiform tablets found at Mari in present-day Syria near the border of Iraq. In Mari, a professional prophet or diviner would enclose with his report to the king a lock of his hair and a piece of his hem. Both the hair and the hem served to identify the prophet, but more important, the piece of hem served to guarantee that the prediction was true. Sometimes the hem was impressed on the clay tablet as a kind of signature.

Today, a person who cannot write sometimes “signs his name” by impressing his fingerprints on the document; in ancient Mesopotamia, a member of the upper class sometimes “signed his name” by impressing part of his hem on a clay tablet to insure its authenticity…. David cut the hem of Saul’s cloak to prove that he could easily have killed Saul if he had wanted to, but that he would not harm the Lord’s anointed. The passage has a deeper significance, however—in some ways the opposite significance. The hem that David cut off was an extension of Saul’s person and authority.

David did in fact harm the Lord’s anointed; that is why David immediately felt remorse for what he had done: “Afterward David reproached himself for having cut off the hem of Saul’s cloak” (1 Samuel 24:6). According to the New English Bible translation, David’s “conscience smote him” (1 Samuel 24:7). Although protesting that he had not lifted a finger or a hand against the Lord’s anointed (1 Samuel 24:10), David had in fact committed a symbolic act—cutting off Saul’s hem—of enormous significance. This significance was not lost on King Saul; he understood full well: “Now I know that you will become king”

Ein Gedi, where David hid, is lovely, and a nature park today in Israel. Just west of the dead sea, it’s a series of caves, springs, waterfalls, and trees nestled into the craggy hills of the rise from the Dead Sea westwards towards Jerusalem. Some pictures from my January trip below.

Who were the Philistines?

For reasons not completely known, several major and minor civilizations collapse around 1200. What we do know is that a lot of people around the Mediterranean decided the grass was greener elsewhere, and they got on boats, and recolonized.  These invaders contributed to the collapse of the Hittite and Ugaritic kingdoms on the NE of the Med, but one of the other places they landed was around the mouth of the Nile and what is today the Gaza strip.

These peoples had many names and groups: the Sherdani (Sardinia?), Lukka (Lycia?), Shekelesh (Sicily?), Danuna, and Peleshet, among others. The Peleshet we know today as… the Philistines. They land on the beach, and invade Egypt, our primary textual source for the Sea Peoples. They are eventually driven out of Egypt, and settle in 5 cities along the SW coast: Gaza, Ashdod, Ashkelon, Ekron, and Gath. This well-established textual and archaeological history is how we know the Philistines were not there in Abraham’s day, contra the patriarchal stories in Genesis which mention Philistines and their kings. Goliath was a Philistine, and as Israel’s southern neighbors, they became a traditional enemy. Much of Samuel is taken up with the Philistines. 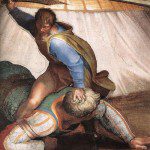 July 3, 2018 Old TestamentGospel Doctrine lesson 24- 2 Samuel 11-12, Psalm 51
Recent Comments
2 Comments | Leave a Comment
"I just completed reading your paper The Israelite Roots of Atonement Terminology. Thank you for ..."
Minette Ngalu Gearing Up For Isaiah
"Even if the Gospels are eyewitness accounts, they are definitely not reliable sources. See here:https://lutherwasnotbornaga..."
Gary M Brief NT Introduction and Gospel Doctrine ..."
"Ben. A couple of comments on your references: ANYTHING by Raymond Brown is excellent. The ..."
CalSailor Virtual Sperry Fireside On Reading the ..."
"This is a great move! Looking forward to using your new website ."
DeAnn Spencer We’ve moved!
Browse Our Archives
get the latest from
Latter-day Saint
Sign up for our newsletter
Related posts from Benjamin the Scribe