As I gather most people are past these chapters, and I happen to be crazy busy, I am not updating them as much as I (and perhaps you) hoped.

First, take a look at my separate post on Psalm 51. Second, here is my podcast on these chapters. I strongly recommend taking a listen/look, because it’s the counterbalance to what is below.

I’ve often seen Gospel Doctrine lessons end up debating whether David or Bathsheba was to “blame” for this. The answer is probably, in some sense, both, though not at all distributed evenly; to be clear, while the vast majority of responsibility lies with David, Bathsheba is unlikely to be completely blameless. Here, though, the text is simply not interested in exploring how Bathsheba managed to engaged in a ritual bath (normally a full-immersion miqveh) in a way that was visible to David. These baths, in a city, tended not to be public or visible, but this is making assumptions off norms. One scholar says, “There is no real reason to assume that Bathsheba actually intended to be seen by the king”- Word Biblical Commentary on 2 Samuel.

On the other hand, “The reason for Bathsheba’s bathing in a place where she could be seen is not explored by the narrator, whose only concern at this point is with the irresponsible actions of the king.” ZIBBCOT. That is, the text simply doesn’t care to answer this question.

The character of Bathsheba and her motivations are particularly puzzling. The author gives no clues to the emotions of a woman who commits adultery, becomes pregnant, loses her husband, and marries her royal lover. From a literary perspective, according to Berlin, Bathsheba is simply an agent, a person necessary for the plot, and not a full-fledged character. Since 2 Samuel 11 is a story about David’s adultery, and since such a story requires a married woman, Bathsheba fulfills this function.- “Bathsheba” Anchor Bible Dictionary

Bathsheba later shows that she is politically ambitious as well as clever, leading some scholars to suggest that in this first episode, “David and Bathsheba are co-conspirators in a political scheme to marry.” (Ibid.) This, however, is beyond the point. Clearly, regardless of Bathsheba’s emotions or intentions here, this is the Ancient Near East and David is The King. That is an extremely asymmetrical divide of social power between the man and woman in this relationship. David is the one who is not where he should be (namely, at the front per 2SA 11:1; it was normal for the king to walk about on his flat roof), David is the one who pursues the relationship and indeed, David is the only one with the power to do so, and it is abuse of power.

Regardless of the specifics, this temporal clause [in v.1] clearly places the events of chapter 11 in the historical context of David’s Ammonite wars given in chapter 10, so that the military action of 11:1 is intended to finish what was begun by Hanun and his Aramean allies. In striking irony, David is thus described as performing his rightful (and righteous) role as king of Israel; that is, he is defending the nation against those who want to destroy her (1 Sam. 9:16). The irony, of course, is that David stays home, and rather than defend his subjects, he abuses them (i.e., Bathsheba and her family)….

So what is David doing in Jerusalem? Approximately one year after the Ammonites start the conflict, while Joab and the army are risking their lives for the good of the nation, David is at home “killing time.”

Much like today’s #MeToo environment, the focus of the text is on the mismatch of power and the misuse of that power by a man in a position of authority.

Since the rest of my commentary would be repetition of my podcast, let me save time by pointing you that direction again. I’ll also include this excerpt from a book I’ve recommended before. The Protestant authors are more conservative than I am, and I disagree with some of their readings (e.g. “the text never says, or even suggests, that she was Jewish” runs against every commentary I’ve seen and the clear implication of her purification in 11:4), but it is useful in illustrating some cultural differences. They use the story to illustrate differing conceptions of honor and shame. It’s a good book and one I continue to recommend. Richards and O’Brian, Misreading Scripture with Western Eyes: Removing Cultural Blinders to Better Understand the Bible 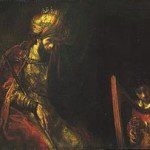 July 5, 2018 Old Testament Gospel Doctrine Lesson 25- Psalms
Recent Comments
3 Comments | Leave a Comment
Browse Our Archives
get the latest from
Latter-day Saint
Sign up for our newsletter
Related posts from Benjamin the Scribe