One of my qualifying exams is in Reformation history. As the story goes, Oct 31 is the day Martin Luther nailed his  95 theses to the door of the church, so Oct 31 is sometimes known as Reformation Day. What many people don’t know is that a) this story doesn’t mean what people think it does and b) it might not even have happened.

University professors, as Luther was, operated differently from today. A primary form of teaching and scholarship was the Disputation, which required publicly laying out a series of theses pointing towards a yes/no conclusion. The way you announced these Disputations was to put up a paper copy on the church door; In other words, the nailing to the door is the equivalent of sending out an email announcement of a lecture, not a deliberate frontal assault on Catholicism as it is sometimes portrayed.

And so, I’m posting some books from my Reformation exam reading list (still a bit in flux) that I think are accessible. Some of these are not strictly on my list; due to circumstance, I had limited coursework in this area, so some of my readings are a little more general and introductory. Also, most of the list below is still to-read for me.

People of the Reformation and Their Ideas

And if you know nothing, the film Luther has high production values and features Joseph Fiennes as Luther. It’s a little bit one-sided, as it’s sponsored by a Lutheran group, but definitely worth watching.

October 29, 2018
(Updated) Some thoughts on scripture study for adults and youth
Next Post 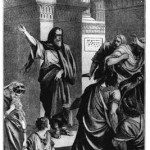 November 1, 2018 Old Testament Gospel Doctrine Lesson 41: Jeremiah 1-2; 15; 20;26; 36-38
Recent Comments
0 | Leave a Comment
"I just completed reading your paper The Israelite Roots of Atonement Terminology. Thank you for ..."
Minette Ngalu Gearing Up For Isaiah
"Even if the Gospels are eyewitness accounts, they are definitely not reliable sources. See here:https://lutherwasnotbornaga..."
Gary M Brief NT Introduction and Gospel Doctrine ..."
"Ben. A couple of comments on your references: ANYTHING by Raymond Brown is excellent. The ..."
CalSailor Virtual Sperry Fireside On Reading the ..."
"This is a great move! Looking forward to using your new website ."
DeAnn Spencer We’ve moved!
Browse Our Archives
get the latest from
Latter-day Saint
Sign up for our newsletter
Related posts from Benjamin the Scribe