Seekers and Guides: Your Mileage May Vary – Embracing Contradictory Truths in the Craft

Seekers and Guides: Your Mileage May Vary – Embracing Contradictory Truths in the Craft April 26, 2015 Sable Aradia

This week’s Pagan Experience topic was: “When we speak of Deity and the Divine there are many ways to perceive their energy. Do you identify Deity as archetypal energy, part of a larger Limitless Source, purely anthropomorphic or a synthesis of much more?”

I felt I had already answered this question in an article I wrote for the Agora blog when “Seekers and Guides” was my column there.  So I thought I would reprint it.

In our society, we are used to things being one way or another.  It’s daytime or it’s nighttime.  It’s the truth or it’s a lie.  It’s right or it’s wrong.  You turn left or you turn right.  When this concept of carefully balanced binary reality is challenged, we struggle with it and we don’t know how to handle it.

I have quoted my initiator Lord Redleaf before, who said, “Wicca is an individual pursuit, best practiced in groups.”  As individuals, our experiences are distinct from one another; I like to joke that if you get ten Witches in a room you’ll have thirteen different opinions.

I suppose now you’re probably confused.  What do I mean by this?

I mean that one of the most beautiful things about Wicca is that in order to begin to gather the gleanings of understanding, you have to embrace a certain multi-layered level of thinking.  Rather than considering that if one thing is true another must be false, Wicca asks you to accept that many contradictory things can be true at once.  Rather than saying “either, or,” Wicca says, “yes, and.”  Let’s look at some examples of what this looks like and what I mean.

The Nature of Divinity

Let’s consider the Wiccan concept of divinity.  First of all, let’s start with how many there are?  Most Wiccans conceive of a binary image of the Divine; we honor both God and Goddess.  But are these two separate beings, two aspects of a Divine One, or many gods and goddesses who are each separate and distinct individuals?  If we believe in the Divine Couple, do we place different emphasis on Their relative importance?  Is the Lord merely the Divine Consort of the Creatrix, or is He a full equal and partner to the Goddess and a balance in polarity?  Or something in between?

Let’s break it down further: what are the gods, exactly?  Are they literal beings, metaphors, archetypes, or some personified consciousnesses that we will never truly understand?  If they are actual consciousnesses as opposed to symbols, are they so alien that we humans will never truly grasp what it is that they are, or are they basically people without bodies; or are they something in between that?

How do the gods relate to each other?  Are they all harmonious aspects of a whole that ultimately get along together no matter how you work with them?  Do the different cultural names for an archetype (such as the Goddess of Love or the God of the Harvest) refer to the same being in different aspects, or are they all individuals?  If they have personalities, how do those personalities interrelate (or clash?)  Is it okay to call deities from different pantheons at the same time or is that an act of grave offense, or does that vary according to deity and pantheon?

What sort of relationship should we have with the Divine?  Should we worship them with all due reverence?  Should we merely respect?  Should we co-create with them?  Are we their equals, their subjects, or something in between?  How important are we compared to divinity?  How important are we to the Divine?  How about other spiritual entities, such as angels, faeries, and so forth?  Do they exist?  Are they mere flights of fantasy?  Are they gods of a sort or are they non-physical entities that rank on the same level we do (wherever we rank,) or do they fit somewhere else in the hierarchy (if you even believe in a hierarchy)?

What do the gods know?  What kind of powers do they have?  Do we have similar powers or different ones, or does all power come through them?  Did we create them, did they create us, or did we create each other?

The answer to all of these questions is: yes, depending on your point of view.

The Nature of Magick

Do you believe in magick?  What is it?  How does it work?  Are you beseeching the Divine for aid, co-creating with the Divine, or entirely exerting your own Will?  If you accept that magick exists as part of your belief and practice, can you make literal, direct changes to the world with magick, or do you merely influence probabilities?

The answer to all of these questions is: it depends.

There are no wrong answers; that’s the beautiful thing about the Craft.  And while I do believe you have to decide for yourself how it works, and embrace your own truths and then work within that paradigm, many of these can be true for you at once without you having to embrace all of them.  As they say nowadays: your mileage may vary.

It was December 21, 2010. The Full Long Night’s Moon fell on Midwinter Night, and I had a dream.  In this dream, I looked up at a stack of old books that wound in a haphazard pile up to the ceiling of my house and through a trapdoor to an attic.  I had a sense that I had to get to the top of the pile, so I started to climb the stack.  I realized that there were all types of books in the pile; old hardcovers with no title save the gilding on the side, magazines, paperbacks, trade paperbacks, new hardcovers with fancy book jackets.  When I reached the top and went through the attic, I was in a different house; all white walls and minimalist art in an upper middle class style.

The stack meandered through a skylight into a library of the old-fashioned sitting-room type, up to another skylight.  I climbed up through that one, and found myself in a teepee, climbing up through the firepit and into the smoke hole.  On the other side of that was a Mongol yurt; on the other side of that was a little apartment with peeling green paint.  Then there was a Buddhist temple and a Gregorian monastery, an old lady’s apartment filled with doilies, and a college dorm.

Up through probably twenty or thirty different dwellings I climbed and climbed.  The last one was a crowded camper of the sort that fits on the back of a pick-up, and the books finally ended at one of those upper level shelves that hold a camper’s bed.  On the sleeping bags was an old TV, of the sort that still had rabbit-ears and a bubble screen and a UHF dial.  It came to life as I approached and passed quickly from snow to an image.  It was Pan, in His full glory with His hairy goatee and His curly goat horns and His intense black eyes.  “You wanna know the truth?” He said directly.  “Well, here it is: there is no truth.  You make your own truth.  Do with that what you will.”  And with that, I awoke.

Here’s what I did with it:  I have shared it with you.  Do with it as you will. 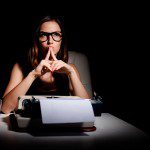 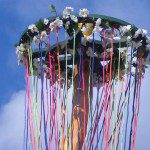 April 27, 2015 Seekers and Guides: Maypole Magic
Recent Comments
0 | Leave a Comment
Browse Our Archives
get the latest from
Between the Shadows
Sign up for our newsletter
POPULAR AT PATHEOS Pagan
1

The 25 Most Important Witchcraft Books...
Raise the Horns
Related posts from Between the Shadows