The Howling Over DACA and the Generosity of God 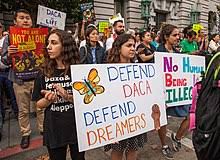 Perhaps the most upsetting image of the kingdom of heaven Jesus offers is that of the Generous Employer, who keeps hiring on workers all day long. Early in the morning he offers nice wages to a group of workers, and he asks them if what he is offering is fair, and they say, indeed it is.

Every hour the Employer hires more. And behold! He offers the same wages to those who start near the end of the day as he is paying to those who have worked all day.

And the all-day workers grumble. But the Generous Employer chides them, saying, You were happy with the wages I offered. Are you envious because I am generous? And then he warns them: the last shall be first and the first last.

The flipping of the order of the world is a repeated theme of Jesus, and he often links it to the kingdom.

The kingdom, of course, is the place where God reigns, and we can live in the presence of God. And it can, says Jesus, be anywhere, among us now, today, or ahead of us, after death. Whenever time opens into grace, the kingdom is there.

And all the players in the kingdom parables are images of God and can be images for us to fulfill – if we choose.  The Generous Employer. The Careful Gardener. The Wild Sower. The Baker who makes enough bread for everyone. The Diligent Coin Seeker. The Good Shepherd. The Buyer who sells everything, for a Pearl or for Treasure in a Field.

Some of the images are male and some are female. Everyone can be like God, Jesus teaches, just as God is male and female.

But each image also trips us up makes us balk at accepting it: the kingdom requires us to give up some cherished values, some long-standing opinions, in order to enter the presence of God.

And we are now caught in a rancorous public squabble about generosity, specifically about generous hospitality to Dreamers, those adults who have lived in the US since they were small children, whose parents brought them here. They have never known another country. English is their language, they have attended American schools all their lives, and many are now productive, tax-paying citizens, doing all kinds of skilled work and contributing through it and through their taxes to the support of this nation.

Howling against the DACA act, which would allow them to stay here, are those who feel it is unfair that they entered without due process.

I have to ask them, why would we prefer to admit people who have never lived here, whose English is not as good, and whose work abilities are not as good? Who could be a better fit for the US than the Dreamers are?

But there is a dark side to this argument:  sending these adults back to a homeland that is not their home would subject them to misery, for they are unfit for life there in every way. It would separate them from their communities, their friends, their jobs. Not to keep them here is cruel.

And in Jesus’ parable of the Generous Employer, the same reality is present. Those who worked the fewest hours will not be able to live on the little pay an hourly rate would afford them. They need a full day’s pay. And if the Employer is willing to offer it, why should we, who have had the assurance of a full day’s work, complain?

In this 500th year of Luther’s life work, in which he so faithfully taught the gospel and overturned doctrines which misinterpreted it, we celebrate his recognition that no one can work enough to earn salvation from sin, that it is the grace of God that saves us, not the amount of work we do or the good deeds we amass before we die.

Luther reflects Jesus’ parable in this: we are not engaged by God in a life where those who work the hardest win the right to enter heaven. Nor are we competitively engaged in producing good works, in order to earn the right to be part of the kingdom.

There is a wonderful film around, and I was lucky enough to find it in Portsmouth – I hope you find it and see it! It is called All Saints, which is the name of a church in Tennessee. It is a true story of what happened to this church, when the older, dwindling, hard-working, English-speaking congregation could no longer support the building and was in anguish about closing it.

What happened? A group of desperately poor immigrants from Burma were settled in their town and came to church. They were not the answer to the poor white folks’ prayers. The needed a huge amount of support. And they needed the church to change its ways.

What happened was a miracle. Not the magic wand kind of Wizard stuff we all want. No, the other kind of miracle, the kind Jesus talks about in kingdom parables. Everyone had to work incredibly hard. Set backs occurred often, and they occurred when people were exhausted.

The future was hard to see, so they had to keep going in faith, when many wanted to stop. And the miracle was not so much what they did, but what happened to them along the way.

They argued. Yes they did. As Jesus tells us the workers in the kingdom argued, about what was just and fair. So we learn that argument is part of life in the kingdom, it isn’t all Kum-bay-yah moments.

And that makes the kingdom a little bit like America: a place where we have to do the difficult work of making room for people whose experience isn’t like ours, but who are just exactly the people we need. Only we can’t see it at first. We can only see it at last.

So in all kinds of ways, first becomes last, and last becomes first – in the parable, in hope, in kingdom time, and in faithful life. 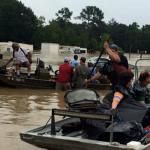 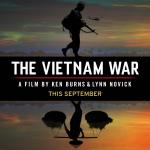