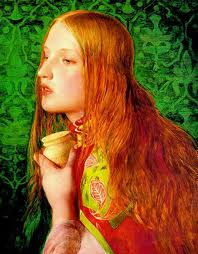 Every time she enters his presence, according to all four gospels, she reaches his heart. His attention is drawn to her. And his heart opens.

She is Mary, sister of Martha and Lazarus, with whom she shares a home. We don’t know when they met Jesus, but we know he turns up in their home often.

At least twice he comes for dinner, including today’s story. The Last supper is held here. And he appears on Easter to the disciples in Mary’s home.

The number of visits is striking, compared to all other homes he only visited once. There is no other place in which he appears as often as he does in theirs.

But even more striking, within these visits, is the intimacy he shares with Mary, how he moves to defend her, protects her from criticism, and shares her tears.

She, in turn, is seen sitting at his feet, and, in this story, caressing his feet, and his hair, loving him with costly oil she applies with her own hair.

The disciples must have noticed this intimacy, for they criticize her more than once, something they do not do to Magdalene, nor even to each other.

When she sits at his feet among the men to be near him and to learn from him, her sister Martha complains Mary is neglecting the work of serving food and drink to their guests. Jesus defends her, saying she has chosen the good portion and it will not be taken away from her. Nor, it seems, will she be taken away from him.

When her brother Lazarus is profoundly ill with fever, Jesus, busy with other things, hears the news from his disciples, but takes some time to arrive at their home. Lazarus dies before he arrives. Jesus is sad. Martha goes to him in the road with words of regret, even reproach, but also, resignation.  Mary, though, runs to him and falls at his feet, bathed in tears, her sobs breaking his heart. And he, too, weeps – his tears brought forth by hers. His heart wells up in response to Mary, and for her, he rushes to Lazarus’ grave, calling him with such spiritual power to Come Out, that Lazarus does. In defiance of the law of death. And in healing for Mary’s heart.

Now we read the tale of Jesus’ arrival at their home six days before Passover.  He will be their guest for a week.  They throw a feast in his honor. Lazarus is there, a fact often forgotten. But never to be forgotten is Mary’s presence, for she brings out a jar of costly perfume, made with pure nard, we are told, and anoints his head, his hair, and then, using her own hair, his feet, They are joined in an embrace of fragrance.

Judas recoils. From what? From the peculiar feeling that comes in the presence of enamored lovers? From a desire that Jesus focus on a political agenda, not her love?  Or is it as he says, the extravagance of the gesture that bothers him. He declares the perfume could have been sold for a large sum and used to feed the poor.

Again, Jesus protects and defends her. Leave her alone! He rebukes Judas, saying You will always have the poor, but you will not always have me.

There is no one else in the gospels for whom Jesus feels so tender, is so responsive, speaks protectively, and with whom he chooses to be a frequent guest.

Scholars at Harvard are researching the possibility that Mary Magdalene may have been Jesus’ wife. They work with written fragments from the early churches that refer to a wife.  As well, they refer to her central role in the community of the disciples.

According to all four gospels, Magdalene stood at the foot of the cross with his mother, she was the one who led the women to his grave to anoint his body, and she was the first to know of his resurrection. All of these details seem to insist she was Jesus’ wife.

In an era when marriage was not rooted in romance but in family arrangement, when marriage was a contract of duties and obligations, not a commitment of tenderness, Jesus may well have wed a woman he did not love in a romantic way. And then it was with Mary, the sister of Martha and Lazarus, that his heart discovered a depth of love that made him fully human.

Why do we continue to assume that Jesus never felt such feelings? Never walked the streets with Mary’s name in his mind, the scent of and her perfume in his hair?  We know the most astonishing of his miracles, the raising of Lazarus, for which John says the authorities chose to kill him, was done for love of her. 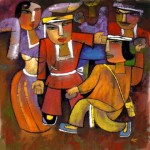 March 10, 2016 The Young Messiah
Recent Comments
0 | Leave a Comment
Browse Our Archives
Related posts from The Bite in the Apple