What Do We Pray For?

Recently I was talking with a colleague about how to interpret a survey item on a major sociology study which asks respondents “How often do you pray?”  He said that, as a person who doesn’t hold supernatural beliefs, he sometimes finds it hard to deal with life’s difficulties. However, since has nonetheless made it through many challenges without becoming a religious person, people who pray a lot must be people who are biologically more prone to anxiety and hence need to pray when life gets tough.

His hypothesis that people pray because they are biologically prone to anxiety and find comfort in prayer rests on a particular idea of what people are praying for. I must admit that when I started my fieldwork among Haitian Catholics some years ago, I also thought people must be praying to deal with anxieties and challenges, but my interviews taught me otherwise.

One day about a month into my fieldwork at Notre Dame d’Haiti Catholic Church in Miami, I was feeling frustrated that, despite my warm acceptance into the community, people thought my questions were odd. Questions like “Does the church help you get social services?”; “What about legal papers?” “Health care?” elicited very few replies. 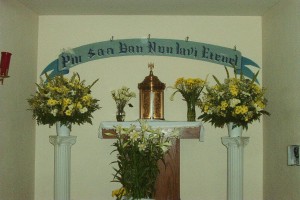 I also noticed that people who came to the church often prayed, sometimes for long periods of time, in front of the tabernacle or a picture of the Blessed Virgin Mary. Since no one seemed to want to talk to me about how the church’s large social service center helped them resolve their many problems, I figured they must be asking God to intervene. 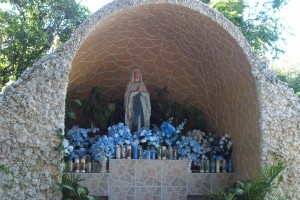 So one day, I finally asked a woman I had been helping tutor English to, who I call Julia in my book, “Julia, what do you ask for when you pray?” Her reply really surprised me. “Ask for?” she queried me in return. “First, I give God thanks for all the things I have. We have to be grateful because we are God’s children.” But surely, I insisted, you must be asking God to help you? “I pray for others first. I pray for peace in the world; for an end to violence. Only when I’m done all that would I ask for what I need.”

So before jumping to conclusions that praying means asking for things or trying to relieve anxiety, let’s think more broadly about prayer. Part IV of the Catechism of the Catholic Church describes various forms of prayer: blessing and adoration, petition, intercession, thanksgiving, and praise. Similarly, an Evangelical colleague told me he grew up learning that prayer consists of “ACTS”: Adoration, Confession, Thanksgiving, and Supplication.

Ok, so how many Catholics have read the Catechism’s beautiful discourse on prayer in the Christian life? Fair enough. As enthusiastic as he was about “ACTS”, my Evangelical friend admitted he wasn’t sure how widespread this practice is among evangelicals. But millions of Catholics do read sites like the Irish Jesuits’ site called Sacred Space. I opened their page today in the middle of my hectic workday today and got a nice reminder that prayer is God’s invitation to me­, not something I do first. Certainly, millions of Evangelicals likewise are reminded to give thanks for their blessings and to praise God.

So, back to my question: why should sociologists care what people are doing when they pray? Because our assumptions about what prayer consists of can influence our fieldwork and our interpretation of survey items. The question “How often do you pray?” may be an easy question to put on a survey, but it tells us nothing about what type of prayer people engage in. So if we think that in our consumer culture many people approach God primarily to ask for things, then why don’t we simply ask, “How often do ask God to help with your needs?” And, just to see how many people are grateful, let’s also ask “How often do you give thanks to God?” 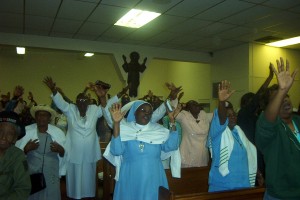 Haitian Catholics taught me many lessons on prayer—perhaps the most important one being that prayer must encompass gratitude. An excellent piece of religious journalism, featured on the front page of the New York Times on Thanksgiving Day 2010, captured much of the richness of Haitian Catholic Charismatic prayer. But, as I noted in a blog entry for the University of Notre Dame, this otherwise wonderful article missed the centrality of gratitude to Haitian Catholics’ prayer lives. On Thanksgiving Day, I surmised, we would do well to ponder what newcomers to the U.S. can teach us about gratitude.

My hunch that academics don’t seem to really know what people do when they pray was confirmed by a new Templeton-funded research initiative on prayer announced in September 2011. Their RFP states, “While in the past much attention has been given to questions concerning the efficacy of prayer, much remains to be discovered about its sources, varieties, and relations to other important aspects of modern society and culture.” Amen.

Every Church Needs a Joker (And...
Roger E. Olson
Related posts from Black, White and Gray