For various reasons, public discussion of religion tends to attract (and create) a lot of inaccurate statistical information. This was a theme of my first book, Christians are Hate-Filled Hypocrites… and Other Lies You’ve Been Told, but there’s plenty more to write about.  So, I thought that I would start a periodic feature where I examine some of the questionable information making the rounds on-line.  I call it Questionable Religious Statistics (QRS).  Examining these claims not only clarifies what’s happening in the world of religion, but it also gives us practice in evaluating such information.

I start with an article written last week by Hank Pellissier at ieet.org. In it he claims that atheists are more generous financially than are religious people. He summarizes: “Atheists, non-believers, secular humanists, skeptics—the whole gamut of the godless have emerged in recent years as inarguably the most generous benefactors on the globe.” 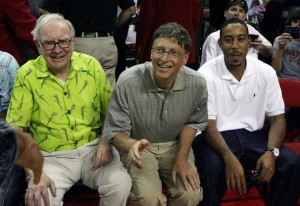 Mr. Pellissier bases his claim on two pieces of evidence.  One, the magazine Business Week lists the billionaires who have donated or pledged the most money to charity, and this list is headed by Warren Buffett and Bill & Melinda Gate who have given 41 and 28 billion dollars respectively to worthy causes. Mr. Pellissier refers to both of them as “atheists.” (George Soros is a distant third, having given 7 billion).

Based on these two pieces of information, Mr. Pellissier headlines his article: “Atheists are the most generous—even without heavenly reward!”

Has Mr. Pellissier’s provided sufficient evidence to back his claim? From my perspective, the answer is a clear “no.”

Furthermore, Warren Buffett and Bill Gates are self-described agnostics, not atheists.  So, their considerable generosity does not reflect well on either religious people or atheists.  In fact, Bill Gates, in an interview with David Frost, is quoted as saying: “There’s a lot of merit in the moral aspects of religion. I think it can have a very, very positive impact.”

This raises a more philosophical question about the nature of generosity. Clearly Buffett and Gates have given more money in recent times than anyone else on the planet. But, does this mean that they are the two most generous people in the world? They are able to give the most because they have so much.  Warren Buffett still has 10 billion dollars and Bill Gates 30 billion. I write this as no disrespect to either one of them, for the world would be a much better place if all billionaires followed their example. However, there are people in the world who have given even more of what they have, perhaps demonstrating even greater levels of generosity. For example, the news periodically has stories of poor people who leave behind their entire savings to benefit others.

Regarding Mr. Pellissier’s experiences with Kiva.org, it’s wonderful that he’s involved with that organization, but that doesn’t give us reliable information about the broader world. With the Kiva.org teams, at least we have larger numbers than three people, but the groups of people are selected non-randomly, so we know that atheists constitute the most generous team with this organization, but that doesn’t generalize beyond Kiva.org. For example, I would imagine that the far more Christians give to faith-based charities such as World Vision.  (Also, if we want to be nit-picky, the members of the Christian team give more per person than do the atheist team).

So, what is the true relationship between atheism and charitable giving?  Robert Putnam and David Campbell, in their book American Grace, examine the issue, and they conclude that “religious Americans are more generous.”  Here is some of their evidence, drawn from national probability samples:

So, Mr. Gates, Buffett, and Pellissier’s financial generosity is to be appreciated, but religious Americans are substantially more generous than the non-religious.

Thanks to Scot McKnight for the link!