On Hitchens, Apologetics, and the Strangeness of Christianity

On Hitchens, Apologetics, and the Strangeness of Christianity December 19, 2011 Mark Regnerus

So Christopher Hitchens is dead. Waste no time speculating about his end, or what happened next. It is empirically unknowable. While Hitch’s pen was a sharp one, and I occasionally read his work, I confess I didn’t pay a great deal of attention to his antagonism toward religion, apart from reading the first 60 pages of God is not Great. No new arguments there, so far as I could tell.

For a time after the book was released Hitchens took to debating well-known Christian apologists in public forums. Of course Hitch thought Christianity—and religion in general—was more a force of darkness than light. The first few pages of the book let readers know that in no uncertain terms. His critics often retorted with comparative claims, saying things like, “Yes, Christians have done some bad stuff, but Pol Pot and Joseph Stalin were atheists, and behaved far worse than any of ours ever have.” Perhaps, but when we start comparing body counts, nobody looks appealing anymore.

Apologetics, be it of the positive or negative sort, has never much appealed to me. Not sure why. I slogged my way through Mere Christianity, with effort, and finally completed it on the third or fourth try. Upon our confirmation, a friend gifted me with Peter Kreeft’s Handbook of Catholic Apologetics. While his Catholic Christianity was elemental for me, this one’s collecting dust. In a past life I provided an audience for William Lane Craig and Josh McDowell; nothing but mild irritation resulted.

And yet I think it’s extremely important to plumb the depths of one’s religious faith, to learn it and live it. I’ve just never been drawn to debating the guts of Christianity with those who claim they aren’t interested. Explaining it to the curious? Love it. Defending it against the hostile? Meh.

Perhaps my aversion to apologetics is because I share his sentiment that Christianity is indeed odd.

Admit it. It’s strange stuff, no matter if you’re Christian, Muslim, Jew, or some other offspring of Abraham. We’re talking about degrees of oddness. Too strange, for many: commitment to one’s religious faith and practice is decreasingly common today. Christian devotion is becoming a little like 50th anniversaries, virginity, and good working-class jobs. (My own) analyses of new nationally-representative data from Americans under 40 reveals that large numbers of them are disengaging the faith; when asked whether they are “more or less active in organized religion” today compared to when they were growing up, 53 percent said they were less active; only 12 percent responded that they were more active. (The rest said “about the same.”) The gushing public praise we’ve witnessed upon the recent deaths of two secular figures—Jobs and Hitchens—make sense. Americans are becoming more like them. Short of that, Christians often morph into Moralistic Therapeutic Deists. In light of all this, why so little impetus to defend my faith?

Duke theologian Stan Hauerwas asserted, “I’m not interested in what I believe….I am not even sure what I believe. I am more interested in what the church believes.” Bingo. The idea of plumbing the depths of what I myself might come to conclude about God, Jesus, expiations, resurrections, justifications, sanctifications, sacraments, vestments, eschatology, and a host of other strange terms and odd ideas simply does not interest me. What the Church asserts about them—now that’s a different story. I have grown tired of the burden of personally discerning truth. It only leads to the divisions Hitch so eloquently articulated. Church-shopping reveals it: when you just can’t quite find the place you’re looking for, consider whether the problem lies on the demand side, not the supply side. The challenge, I came to find, isn’t epistemological, as in “How would I know what’s true?” It is autobiographical: “How would I know what’s true?” The older I’ve become—and the more I sensed that nuance, dilemma, loss, and mystery weren’t variables in life anymore, but were now constants—the more I wondered just how wise it is to arbitrate them all myself.

We never actually do that anyway. We all have a social “magisterium” of some sort—a living, breathing authority system. People we trust. If you’re foolish enough to make yourself defense attorney, judge, witness, and jury, or to vest it all in some compelling hero—be it Hitchens, Dawkins, Piper, Chan, Warren, Lewis, or whomever–you’re a more daring soul than I am.

In the end, despite what Hitch thought, it may well be rational to believe—and believe I do—but it’s still pretty wild, pretty mysterious, and always interesting.

December 17, 2011
Christianity and Islam throughout the World (map)
Next Post

December 20, 2011 Sociological rules of Christmas gift giving
Recent Comments
3 Comments | Leave a Comment
Browse Our Archives
get the latest from
Evangelical
Sign up for our newsletter
POPULAR AT PATHEOS Evangelical
1

Are You a 'Judgmental' Christian? Good.
The Chorus In The Chaos
Related posts from Black, White and Gray 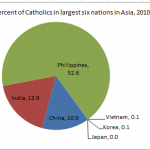