God and Suffering: Remembering the Haitian Earthquake of January 2010

January 10, 2012, marks the 2nd anniversary of the earthquake that devastated Haiti. Having spent much time in Haiti and among Haitian migrants, the tragedy struck me in the heart. Tears rolled down my face when I heard the Archbishop of Port-au-Prince had been killed in the collapsed cathedral.

One of the major themes of my Faith Makes Us Live: Surviving and Thriving in the Haitian Diaspora was about Haitians’ resilient faith. In my initial reaction to the tragedy, I doubted my own confidence in Haiti’s ability to recover, my own hope for Haiti’s future.

Then I saw on the news that the Auxiliary Bishop of Port-au-Prince celebrated Mass outside the ruins. The songs they sang reminded me of the same church songs I sang in the Haitian choirs during my research and brought back my hope, my ability to imagine a better future for Haiti.

Just a few months later, in March 2010, I visited Notre Dame d’Haiti Catholic Church in Miami’s neighborhood called Little Haiti, where I did fieldwork for my book. I attended Mass at Notre Dame with other academic

Given the enormous damage caused by the January 2010 earthquake in Haiti, how did the leaders at Notre Dame interpreted the earthquake in the light of faith? At Mass on Sunday March 7, 2010, Father Jean Jadotte reminded those present that Jesus clearly stated in the Gospel that those who suffer greatly are not bigger sinners than anyone else. When Father Jadotte asked rhetorically during his homily, “Are we better than those who died in the earthquake?” many members of the congregation said “no” under their breath.

Father Jadotte then specifically mentioned he disagreed with Pat Robertson’s claim that Haitians have suffered because they made a pact with the devil. However, Father Jadotte added that all Haitians have some responsibility for the death caused by the earthquake, pointing out that no so many people would have died from the earthquake if Haitians had organized their country better. To conclude his message, Father Jadotte pointed out that St. Paul wrote that all people, not just some, are in need of conversion. God has given those who survived the earthquake a second chance, during which they have to work harder than before to rebuild their country.

Rather than attributing a natural disaster to an individual’s sins or the collective sins of a people, Father Jadotte’s homily emphasized a recurring theme in Catholic social and moral teaching: the people of God are called to build a just world, achieved through a constant conversion that obliges them to keep improving this world even when tremendous obstacles arise.

This homily extends the “theology

of grace and hope” I wrote about in Faith Makes Us Live to the latest and probably greatest tragedy in Haitian history. This theology of grace and hope is powerfully illustrated by the picture placed on the altar of Notre Dame, which shows a man in Haiti gazing at the ruins of Sacred Heart Catholic Church. A crucifix remains standing, and at the foot of the crucifix is an image that looks remarkably like the Virgin Mary. The stained glass window behind the picture depicts the Virgin Mary and says in Creole “Mother Mary, you always come to our rescue.”

Motivated by this tragedy to share with others the insights from my work, I wrote eight articles after the earthquake for newspapers, magazines, and online media, such as America magazine,The Social Science Research Council’s online forum on religion and public life “The Immanent Frame”, and the Carolina Population Center’s faculty profile page. Each of those pieces pointed back to some of the main arguments of Faith Makes Us Live :

Two years later, these lessons are still relevant. As the NY Times Editorials wrote this week, Haiti’s recovery has been slow. On the same pages, Duke scholars Laurent Dubois and Deborah Jenson argued that one key to recovery in Haiti is renewing the agricultural sector.

In this recent Miami Herald video interview with Miami Archbishop Thomas  G. Wenksi, who led Miami’s Haitian community for two decades, Wenksi noted given all the problems Haiti had even before the earthquake, progress has been slow but notable. The Archdiocese of Miami posted this review of post-earthquake recovery in Haiti along with helpful links to its many projects in Haiti.

Whatever your specific ideas are for how to help Haiti, it’s good to reflect on Haiti’s past, it’s people’s strengths, and its recurring problems. As Haitians say, “Bondye bon” (or God is good) and “deye mon, gen mon” (or behind the mountain is another mountain). In other words, the path to rebuilding Haiti will never be easy or quick, but there is always hope. 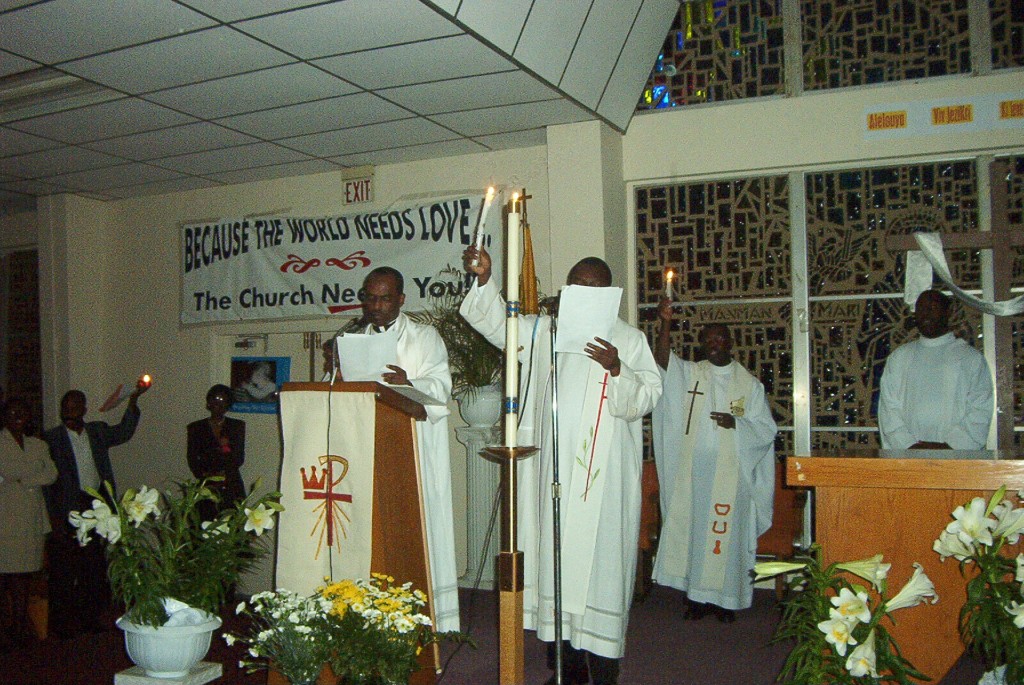 To commemorate the anniversary of the earthquake, Haitians and Catholics from all over South Florida gathered on January 10, 2012, to celebrate a memorial Mass. Notre Dame’s pastor, Father Reginald Jean-Mary, hoped the Mass would help us “to remember our fallen brothers and sisters and to honor their memories. Our hope is this Mass will serve as a reminder of what this terrifying day meant to us, and uplift the families who to this day are grieving their lost ones. No words, no ceremony, can ever replace the emptiness this day has put in our hearts, but may our prayers serve as a comfort to go forward.” Amen, Father Reggie.

January 10, 2012
Why I'd Rather Do Research than Publish
Next Post

January 12, 2012 My Faulty Moral Standards (Which I’d Like to Think are Better than Yours)
Recent Comments
3 Comments | Leave a Comment
Browse Our Archives
Related posts from Black, White and Gray