My Faulty Moral Standards (Which I’d Like to Think are Better than Yours) January 12, 2012 Bradley Wright

﻿I’ve been thinking about personal standards lately, and one of the people I know with the highest standards about anything is UConn Women’s Basketball Coach Geno Auriemma. Here’s a story to illustrate. A couple weeks ago the team was playing West Virginia—a physically tough Big East opponent, and UConn was up by a comfortable margin. West Virginia’s center got the ball in the low post, and UConn’s center, Stefanie Dolson reached around and batted away from her, to one of UConn’s guards for an easy layup at the other end. As Dolson ran by the UConn bench, Auriemma chewed her out. Why? Because from his view on how basketball should be played, Dolson shouldn’t have given up the low-post position in the first place. 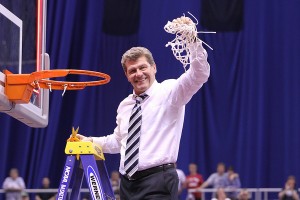 Auriemma has a clear vision of how the game should be played, and he won’t settle for anything less. It doesn’t matter if the team is up 50 points (which happens regularly) or down 10 points (which happens less regularly). As a result, he’s a hall-of-fame coach, Olympic coach, and has a winning percentage of 86%. (His teams have lost 6 games in the last four years). He wants his teams to play to a standard, not the situation. As a result, they have not lost to an unranked opponent since 1999! (In fact, I’m sure that my blogging colleague Jerry Park at Baylor will agree with me that UConn WBB has the best team this year).

When it comes to morals, which may even be more important than UConn basketball, I spend a lot of time watching the scoreboard. By that I mean that while I ascribe to high moral statements, when push comes to shove, I’m usually pretty happy if I’m doing better than other people or if things are going well in general.

(As an aside, this, I believe, is one of the main benefits of sending kids to good colleges. They become like the other kids they go to school with).

Much of my self-evaluation rests upon social comparison. This includes things like my career as a sociologist, being a parent, being a husband, making the house look nice, and so forth.

The problem is that this approach to life doesn’t fit well with Christian teaching which calls for higher standards of thoughts and actions. In general terms, there are bad things we should never do and good things we should always do. (There are, of course, more ambiguous things as well—things that require a judgment call.) For example, gossip is a no-no, and because I think that I gossip less than many people I know, I feel okay about letting out the occasional juicy nugget. There are many more examples of this approach in my life, but, hey, it’s a blog, not confession.

It’s much easier for me to follow absolute standards when most everyone else is. For example, I rarely if ever chase people while wearing a hockey mask and carrying a chainsaw. But, then again, I don’t really know anyone who does. Here my self-evaluation by scripture fits with my comparison with others, and this allows me to think that I’m doing pretty good morally.

The problems arise with actions that don’t fit with my Christian beliefs but are okay in society. There I’m all to content to do better than most, even if it’s not up to snuff with Christian standards. Not that I’ll ever fully meet the higher standards, but I shouldn’t be so content with less.

So, I suppose that I want to start figuring out where exactly these problem areas and reminding myself of faith-based standards. Living to these standards is what separates the Hall-of-Fame Christians from the rest of us.

In the meantime, maybe you could let me know how you’re doing worse than me in this area, so that I can feel good about myself.

January 11, 2012
God and Suffering: Remembering the Haitian Earthquake of January 2010
Next Post

How the Loss of Family &...
Cranach
Related posts from Black, White and Gray