Burning of the Quran

On February 20th, burned copies of the Quran were discovered at the Bagram Air Base in Afghanistan. The U.S. military admitted that they were responsible for not disposing of the books properly. In the wake of the incident, President Obama sent a formal apology to President Karzai and the people of Afghanistan; General John Allen (commander of the NATO International Security Assistance Force in Afghanistan) phoned Karzai to express regret as well. 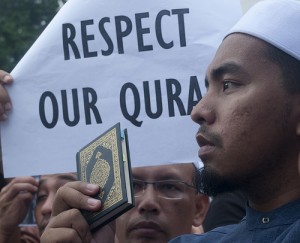 In our highly polarized political environment, several in America—largely political opponents of the president—have spoken out, saying that the apology was too much.  It has been suggested that the apology makes America weak, that there was nothing worth apologizing for, and that apology came from too high an authority. Some have accused the president of merely pandering to extremists.  In the aftermath of the event, at least 40 people have been killed (including 4 U.S. soldiers), and hundreds have been wounded.  Just yesterday, March 5, a suicide bomber blew himself up outside the base in Afghanistan.  Protest has erupted throughout many cities in the nation.

Yet there have also been critiques that the problem was not that the apology was too extreme, but rather, insufficient.  As a recent NPR article suggests, there are several different arguments that have been used to support this claim: that mere words do not counter the physical desecration of a holy book, that the act was not unintentional as suggested, and that this particular event is indicative of a larger disrespect in the West (particularly the United States) with Islamic culture.  Whether intentional or not, we must recognize that the burning of Qurans ignited anger among a number of Muslims—not just the Taliban or others perpetuating violence in the aftermath of the burning.

How we deal with this incident is closely tied to how we understand our obligation to honor the religious commitments of others in an increasingly pluralistic world.   Among some Christians, pluralism can be a dirty word, equated with a rejection of truth claims.  Miroslav Volf, a Christian and professor of systematic theology at Yale University, speaks directly to this issue.  He separates a notion of religious pluralism and political pluralism in Allah: A Christian Response (2011).

It would be unjust and unloving to grant one religious community—our own—freedom to live according to its understanding of the dictates of the one God while denying the corresponding freedom to others. . . . Properly understood, belief in one God who commands love of neighbor requires pluralism as a political project (230-232).

In America and the Challenges of Religious Diversity (2005), Princeton sociologist Robert Wuthnow details what a concept of reflective pluralism entails:

It recognizes a view that a person’s beliefs (perhaps especially about   religion) are intimately connected with the person’s identity or sense of self. Thus, the two cannot so easily be separated.  Respect for the person has implications for how one regards that person’s beliefs (291).

A notion of reflective political pluralism would require us to see religious identity as central to human identity, and to grant people the freedom to live out such identities.   How should such an understanding of pluralism impact our response to the burning of Qurans in Afghanistan?

A Man's Perspective on Leggings
Church for Men
Related posts from Black, White and Gray

Impeachment & the Renaissance
The impeachment proceedings seem like a low point in American politics. Both...
view all Evangelical blogs
What Are Your Thoughts?leave a comment
Copyright 2008-2017, Patheos. All rights reserved.