Good News and Bad News in Marriage and Divorce Statistics

The subject of marriage is on many minds lately, not the least of which are journalists and the POTUS. I love nothing more than to sit in front of pages of population estimates by state or country, over time, and discern the stories in the numbers. Since you the reader probably aren’t likely in a position to be—or worse, have no interest in—indulging such an interest, I’ll save you the work and report some interesting factoids here. No politics from this quarter today, just numbers. Here are a few things I learned:

Ergo, marriage is in retreat (and more so among the poor and working class, as data noted below will suggest), a slight uptick in 2010 notwithstanding.

Second, there has been change in the marriage-to-divorce ratio nationally. This is the statistic that most people (incorrectly) use when they state that “half of all marriages end in divorce.” The ratio has commonly hovered around 2-to-1 since no-fault divorce became a reality. (Before that, it was about 4-to-1 from 1950 to just before 1970.) In other words, this means for every two new marriages recorded in a given year, there is one divorce.

But that ratio has exhibited some change recently. In 2010, the ratio stood at 1.89-to-1, compared to 2.05-to-1 in 2000. Not a radical shift, but a notable one. The action is largely on the marriage side of the equation: the marriage rate has dropped 17 percent in 10 years, while the divorce rate has dropped 10 percent. The two tend to rise and fall together, but clearly not tightly so. People are being more selective about marrying, likely, and as a result there are fewer divorces.

Third, some states exhibit dramatically different stories here. The marriage rate in Mississippi has dropped 48 percent in 20 years (from 1990 to 2010), while their divorce rate has dropped 22 percent. Their ratio of new marriages to divorce is now 1.14-to-1, meaning that if you were going to go ahead and misinterpret that statistic the old-fashioned way, you’d say something like 88 percent of all marriages in Mississippi will end in divorce. Of course we don’t know the future, and any given year’s new marriages aren’t often also reflected as divorces that year—Hollywood goofballs notwithstanding—but the ratio tells us that there are nearly
as many divorces in Mississippi now as there are marriages. Not good.

So which state has the best ratio? Which means (to me at least) the most marriages relative to divorces…the blessed state of my birth: Iowa, where 2.9 new marriages were registered in 2010 for every one divorce. Sociologist Maria Kefalas wrote about Iowa as having many “marriage naturalists,” and it appears so. Even though I’ve been gone from the place since I was 13, cultural traces remain, no doubt.

I should admit that there is one state that artificially has a better ratio than Iowa, but let’s not be serious about counting it as best. It’s Nevada, whose whopper 38.3 marriage rate is so far out of step with the rest of the country, due to its marriage industry. But whereas many wealthy and unhappily-married Easterners used to flock to Nevada for its tolerant divorce laws, that’s no longer necessary. But it remains a marriage factory…for now. But look at this: its 38.3 rate is a fraction of what it was in 2000 (72.2) and before that, in 1990 (99.0). I’m sure that’s not lost on the wedding industry. Times are tough for Elvis impersonators, I suspect.

And in the end, the reliable conclusion tends to remain true: states that exhibit lower divorce rates tend to exhibit lower marriage rates as well, signaling elevated inclination toward cohabitation as a longer-term relationship strategy.

p.s. Note to marrying couples: only you like the idea of a destination wedding. Seldom does anyone else in your orbit feel like spending loads of cash to fly someplace exotic to watch you tie the knot and chat for three minutes. Get married where you live. 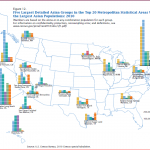 May 16, 2012 Asian Americans on the Move
Recent Comments
21 Comments | Leave a Comment
Browse Our Archives
Related posts from Black, White and Gray