Liking the Quotes more than the Books

I read, for the first time, Flannery O’Connor’s short story “A Good Man is Hard to Find” to my family the other day. Seemed like a better idea than yet another iteration of “International House Hunters” on the television. I’ve been a fan of Flannery O’Connor for a few years, but upon reflection my interest in her may be less literary than biographical. I think she lived an interesting, and unusual, life.

A year or two ago my former graduate school advisor sent around some of his favorite O’Connor quotes, many of which are fantastic, provocative, humorous, etc. (a few of which I repeat below).

But it struck me the other day as I was reading aloud what turned out to be a rather strange, dramatic, and grim story that I may in fact like Flannery for her numerous, witty retorts rather than for the content of her actual writing. As I grimly concluded “A Good Man is Hard to Find,” I found myself wanting to defend what I just read.

And I think it’s not just her. I find plenty of impressive quotations among authors whom I otherwise can’t seem to bear reading in their entirety. From The Confessions of Augustine to Plato’s Republic—two books I recently attempted, briefly, to read—I think I have “Classics envy.” I want to like that which I cannot seem to. There are some fine ones in Mere Christianity, but I found the book largely flat. Finally after 40 years, I’m actually making my way slowly through the Lord of the Rings, which—while not page-turners—can retain the attention span.

For an academic like me, this is all somewhat embarrassing to admit, not being attracted to the Classics and much great literature and all that. I want my kids to read them, and they indeed are reading more of them than I did at their age (or at any age, for that matter).

It’s not that I’m drawn to the NYT bestseller list, or to crime dramas. I haven’t read about hornets’ nests or wizardry, either. What do I read? Too much news, that’s for
sure. Classics envy, I tell ya.

So to conclude this dull blog day—next Monday will be more interesting, I promise—here are five nice Flannery quotes, though I can’t vouch for the totality of their originating sources:

“I’m blessed with Total Non-Retention, which means I have not been harmed by a sorry education.”

“On the subject of the feminist business, I just never think…of qualities which are specifically feminine or masculine. I suppose I divide people into two classes: the Irksome and the Non-Irksome without regard to sex. Yes and there are the Medium Irksome and the Rare Irksome.”

“Don’t let People and their Opinions affect you so much. I always count on a big percentage of Those Who Will Have None of It and do not let myself be concerned about remarks within that circle.”

“One of the effects of modern liberal Protestantism has been gradually to turn religion into poetry and therapy, to make truth vaguer and vaguer and more and more relative, to banish intellectual distinctions, to depend upon feeling instead of thought, and gradually to come to believe that God has no power, that he cannot communicate with us, cannot reveal himself to us, indeed has not done so, and that religion is our own sweet invention…. I find it reasonable to believe [orthodox Christianity], even


though these beliefs are beyond reason.”

“My cousin’s husband who also teaches at Auburn came into the Church last week. He had been going to Mass with them but never showed any interest. We asked how he got interested and his answer was that the sermons were so horrible, he knew there must be something else there to make the people come.” 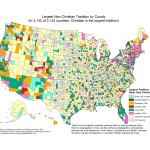 get the latest from
Black, White and Gray
Sign up for our newsletter
POPULAR AT PATHEOS Evangelical
1