At the end of 2011, Fair Trade USA resigned from its membership in FairTrade International (FLO).  Just last month, an advertisement in the Burlington Free Press (Vermont) made headlines.  Equal Exchange, the largest fair trade coffee company in the United States, urged Green Mountain Coffee to leave the Fair Trade USA network.  Business Week and others covered the conflict. 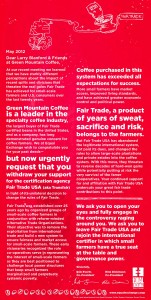 This incident represents growing division over how to best help the population that fair trade was intended to represent.  Perhaps the central reason for the split between Fair Trade USA and FLO was the decision  of Fair Trade USA to work with large plantations and estates (instead of the traditional small farmers and cooperatives). Is it better to work with large farms to promote fair wages for workers, even if the ideals of democratic governance and ownership of the product by producers (requirements of FLO) do not occur?

While not trying to simplify all of the issues involved with a decision to include large farms, one issue at stake concerns the relationships consumers and producers have within alternative markets.  My guess is that most of us do not know the people that bake the bread that we eat, sew the clothes that we wear, build the houses we inhabit, or assemble the components in our computers.  One of the initial aims of the fair trade network created in the early 1970s was to try and make the market more personal.  Consumers were connected with producers through more direct buying relationships; narratives of producers were highlighted as important to the products themselves. You can drink coffee and know under what conditions (and where) the beans were picked.

As someone who studies the intersection of religion and the economy, I’m particularly interested in the role of Christian actors in alternative trade movements.  Religious organizations were important to the formation of the first alternative trade network (following the United Nations Conference on Trade and Development in 1968). Yet twenty years before that, the Mennonite Central Committee was involved in selling artisan goods produced in the global South to consumers in the global North, in a precursor to what was to become Ten Thousand Villages. 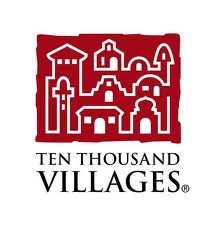 Christians are a relational people, both in terms of their interactions with the Divine, and their interactions with other women and men. Different traditions talk about these relationships differently, but most highlight the importance of these relationships.  For example, the Reformed tradition prioritizes the covenant among God’s people, while Catholics are more likely to rely upon concepts of solidarity and the common good.

This most recent disagreement between Fair Trade USA and FLO should cause us to think more critically about the relationships embedded within our economic transactions. I do not want to argue in this post for or against the decision of Fair Trade USA.  But for those of us who try to engage in ethical consumerism, what do we value?  Is the central goal higher wages for producers and workers?  Is it something more? How do we see ourselves in relationships with those producers, and what does it mean to have integrity in such interactions?

June 4, 2012
Liking the Quotes more than the Books
Next Post

June 6, 2012 How Effective is Online Learning? Insights from Sociology of Religion Online
Recent Comments
4 Comments | Leave a Comment
Browse Our Archives
Follow Us!

What is Pentecost? Why Does It...
Mark D. Roberts
Related posts from Black, White and Gray