I’ve been thinking a lot about social similarity lately, and maybe you have too (uh, yes, that was a joke). In many ways, social life is structured by similar people finding and interacting with each other. Sociologists call this homophily. This tendency of birds of a feather flocking together has been observed with many socially-relevant characteristics, including gender, social class, age, race, occupation and, of course, religion. As a result of it, we tend to spend more time with people who are similar to us than otherwise.

It’s not just that we that we like people who are more similar to us, but in addition, we become more like people who we like. We mimic how they posture themselves, and that in turn makes us more likable to them. (For a strategic application of this).

So… what are the implications of this for the practice of Christianity? Undoubtedly, it’s the reason we observe so much homogeneity within congregations. For example, churches tend to be segregated by race, with people of a particular racial and ethnic group congregating in a particular church. (This trend is changing over time, but it still manifests itself strongly). Even if a church is racially diverse, it will probably be economically homogenous.

Even within churches, we seek out people like us–by age, education, and other social characteristics.

Is this tendency to seek out and bond with similar others a good thing, bad thing, or neutral, from a Christian perspective that is. At this point, I would probably lean toward neutral. On one hand, it presents challenges in terms of diversity–for racially-diverse (and, really, just about anything-diverse) churches are difficult to maintain, especially when they are small. On the other hand, homophily creates strong social networks along which information and assistance can be passed.

This tension, between embracing diversity and taking advantage of similarity, shows itself with how churches and para-churches seek to grow. I know of a college ministry who organize their outreach efforts by race and ethnicity–with meetings specially targeting members of different racial and ethnic groups. The trick then, I suppose, is getting these different groups to interact as a whole. This type of approach–seeking homogeneity at smaller levels of organization and diversity at larger levels is one way of trying to get the best of both.

Perhaps simply being aware of the presence and power of homophily is important for all religious organizations.

September 12, 2012
Are Men and Women Really Different?
Next Post 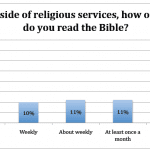