My Re-Encounter with Martin Seligman: Launching a Psychology-Sociology Dialogue on Human Flourishing

My Re-Encounter with Martin Seligman: Launching a Psychology-Sociology Dialogue on Human Flourishing October 16, 2012 Margarita A. Mooney

When, as a 7th grader, I wrote a speech based on Martin Seligman’s theory of learned helplessness, little did I imagine that several decades later I would be sitting at Professor Seligman’s kitchen table discussing what positive psychology can learn from sociology, and vice-versa.

My mother, who earned a degree in counseling when I was in middle school, must have introduced me to Seligman’s ideas. I was fascinated by stories of how people who were repeatedly exposed to stressors but could not control their situation became so pessimistic that eventually most of them gave up, and some even died. I entered a speech competition and won high marks for my presentation style, but given that the competition was sponsored by the local Optimist Club, and that year’s topic was “Optimism: A Way of Life,” my impassioned speech about how pessimism can kill you did not seem to promote their mission. I didn’t win an award from the Optimist Club that year.

Undaunted, the next year I entered a theatrical monologue competition and read an excerpt from Saint Joan of Arc’s autobiography in which she presents a fiery self-defense against charges of heresy, charges that led her to be burned at the stake in France. I won that competition.

My empathy with people whose lives seemed so helpless, so hopeless, continued in the following years. I studied psychology as an undergraduate and sociology as a graduate student because I wanted to change the social structures that created learned helplessness and condemned innocent people to death. After college, I went to live in Latin America and worked at the Arias Foundation for Peace and Human Progress because I wanted to live out Vatican II’s call for the “preferential option for the poor” and fight for social justice.

In this TED video lecture below, Seligman describes briefly his 30 years of work on depression and learned helplessness. Modern psychology, he argues, made tremendous strides in diagnosing and treating a number of mental illnesses. But, he finally realized, curing people of mental illness is not the same as helping them lead a life full of meaning, engagement, and positive emotions. Hence, with a few other prominent psychologists, Seligman founded a movement know as Positive Psychology, which sought to bring the best social scientific methods to help understand what constitutes happiness and perhaps more importantly, whether we can design interventions to increase happiness—which he has shown we can.

Like Martin Seligman, my thinking has transformed recently. Although I started off the research for my book, Faith Makes Us Live: Surviving and Thriving in the Haitian Diaspora, trying to understand how Haitian immigrants overcome the oppressive structures they encounter, I learned—simply put—the power of religious narratives to give people’s lives meaning. Saint Joan of Arc would probably score high on what Seligman describes in the video as one important component of well-being: meaning. According to Seligman, meaning ties our lives, our struggles and sacrifices, to a larger narrative. In the case of Saint Joan of Arc her meaning came from two such common narratives—her civic pride in her nation of France—which she fought so fiercely to defend—and her religion—her beloved Catholic Church, even though it is a church whose officials sadly first condemned her for heresy and burned her alive at the stake and then, after her fiery death, reversed the charges and elevated her to sainthood.

Earlier in October 2012, I met with Martin Seligman at his home to discuss how positive psychology and sociology can learn from each other. I was warmly welcomed by his wife, his dogs and his middle-school children, who eagerly asked us questions about their current passion—the Civil War—and we discussed Lincoln, Grant, and even James K. Polk. 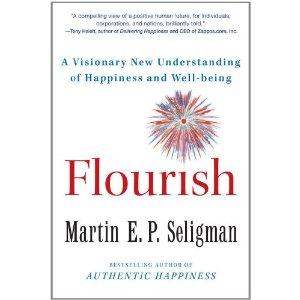 In the introduction to his 2011 book Flourish: A Visionary New Understanding of Happiness and Well-being, Seligman added two new components to his understanding of well-being: relationships and accomplishment. Although I congratulate Seligman for his emphasis that happiness (meaning experiencing pleasure or positive emotions) is not the only or even the highest form of wellbeing. (See BWG blogger Becky Yang Hsu’s articles on the challenges of measuring “happiness”, especially in China). My first question to Seligman was simply, “Why was it so hard for you to convince yourself to add relationships to your definition of well-being?” His reply was honest and frank, “Because I was trained in American psychology, which is very individualist.”

In fact, in a recent paper, Nicolette Manglos and I argued that much  theory in both psychology and sociology is in fact quite individualist, understanding well-being as achieving wealth, health or status.  We further argue that relationships, even though very prominent in much sociology, are very often treated as means to those ends, not ends in and of themselves.

This dual legacy of individualism and instrumentalism obscures two things. First, human beings are by nature social nature of human beings—in other words, our relationships are not things we construct outside ourselves, they form part of who we are (a relational ontology). Second, people performing actions with others pursue regardless of any instrumental value those relationships might have in increasing social capital, producing status, etc. Understanding human flourishing requires knowing what activities people engage in as ends in and of themselves, called constitutive-ends practices.

Where can sociologists contribute to this dialogue on human flourishing which Seligman has helped re-launch? When I described to him the concept of constitutive-ends practices, Seligman immediately agreed that such practices are important, pointing out how Alasdair MacIntyre, a prominent contemporary philosopher, described how social practices existed for the group, not individuals. Going back to the founders of sociology, including Durkheim, sociologists have unique tools to study how rituals enact and strengthen human goods. Durkheim did not depict social rituals as simply accruing pleasure or material goods for individuals, but rather Durkheim argued that isolation could not produce human flourishing, as, like Aristotle, he argued that humans can only flourish through social interactions.

However, for sociologists to enter into a meaningful debate with positive psychology, we need to first critically engage the theories and assumptions that underlie much of our work.  Most sociologists today shy away from asserting ideas about ontology (the nature of human beings) or even about what is good for humans. Yet, like me, most sociologists entered this field precisely because they are passionate about some set of human goods and think they can develop solutions or interventions to make people’s lives better.  If we wish to engage the public in our research—a goal I find very important—we need to understand real world problems and be able to pose better paths forward.

I encourage you to learn more about positive psychology by visiting Seligman’s Authentic Happiness website and taking some of the tests that will help you increase your well-being. I took his Survey of Character Strength and the Optimist Club, where I gave a speech on pessimism years ago, might be interested to know that my number one character strength is now optimism. My second strength is sense of purpose, followed by enthusiasm in #3, love of learning (#4), and last but not least is perseverance (#5). If you put all those together, you can certainly expect to hear more from me on the sociology of human flourishing.

For example, in future posts, I will explore in greater depth different ways that sociologists can study flourishing, analyzing how relationships and rituals—which take place in particular contexts and through habitualized, embodied practices—both form important components of flourishing and strengthen one’s ability to experience the other forms of flourishing Seligman has already described—positive emotions, engagement, relationships, meaning and accomplishment (PERMA). In doing so, I will build a relational ontology into Seligman’s PERMA, exploring the relational, contextual, and ritualized elements of human behaviors in order to better capture how real people live and experience flourishing.