The Apparition of Our Lady at Pontmain, France

Of the hundreds of apparitions of the Blessed Mother in the past few hundred years, a lesser known but authenticated one took place in a small village in France in 1871.  Our Lady of Pontmain appeared in 1871 ain a French town, during a crucial time in the Franco-Prussian war. The apparition was extensively investigated and found to be worthy of belief.

Prussian armies had invaded a large part of France, and the nation was in ruins.  On January 17th,  1871, the small town of Pontmain,  in the north of Mayenne, was covered in snow.  Word was out about the enemy progressing into the area.

Eugene and Joseph Barbedette, ten and twelve, are helping their father feed the horse in their family barn.  Just before six o’clock in the evening, taking advantage of a break from work, Eugene leaves the barn and sees in the sky above a neighboring house a “Lady” dressed in a dark-blue robe sprinkled with stars. She spreads her lowered hands in a gesture of welcome and smiles on him.  Joseph comes along a few moments later and also sees the Lady.   But the boys’ father sees nothing.  Then they call their mother, who also fails to see anything even after going back to the house for her eyeglasses.  The parents tell the boys to come in for dinner.  After dinner, the boys still see the beautiful Lady, so the Sisters of the school are called.  Again, they see nothing. But two little girls with them do see the beautiful Lady and describe the star-studded blue robe, the dark veil, and the crown of gold.

The crowd was now about sixty people including the priest still saw nothing and began to say the rosary, as the children exclaimed that something new was happening. A blue oval frame with four candles, two at the level of the shoulders and two at the knees, was being formed around the Lady, and a short red cross had appeared over her heart.

As they prayed the rosary, the apparition figure grew larger, until it was twice life size; the stars around Our Lady began to multiply and attach themselves to her dress until it was covered with them.

As the Magnificat was being said the four children cried out, “Something else is happening.” A broad streamer on which letters were appearing unrolled beneath the feet of the Lady, so that eventually the phrase, “But pray, my children,” could be read. 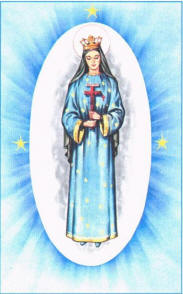 Fr. Guérin then began the Litany of Our Lady, sung, and it was then new letters appeared, spelling out, “God will soon answer you.” As they sang, another message was formed, one that removed any doubt that it was the Blessed Virgin who was appearing to the children; “My Son allows Himself to be moved.”

The children were so happy in the presence of Our Lady Lady and her smile, but her expression then changed to one of sadness, as she now contemplated a large red cross that had suddenly appeared before her, with a figure of Jesus on it in an even darker shade of red.

One of the stars then lit the four candles that surrounded the figure, as the crucifix vanished.  As the crowd continued praying, the children reported a white veil was rising from the Lady’s feet and gradually covering her, until at about nine o’clock the apparition ended.

The following March a canonical inquiry into the apparition was held, and in May the local bishop questioned the children. The inquiry continued later that year with further questioning by theologians and a medical examination. The bishop was satisfied by these investigations, and in February 1872 issued a statement that it was the Blessed Virgin who had appeared to the children.  The final approval for the apparitions of Our Lady of Hope was given in 1932 by Eugenio Cardinal Pacelli, who later became Pope Pius XII.

Joseph Barbadette became a priest, a member of the Congregation of the Oblates of Mary Immaculate, while his brother Eùgene became a secular priest.

A large basilica was built at Pontmain and consecrated in 1900. 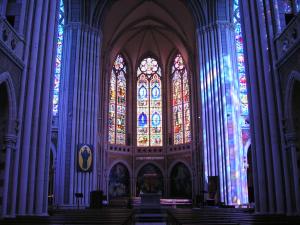 the Basilica of Our Lady of Pontmain, France, built near where the apparition occurred in 1871

Is The Virgin Mary Weeping in New Mexico?

January 19, 2018 Meet the Four Moms Who joined President Trump in Addressing the March for Life
Recent Comments
0 | Leave a Comment
"why doesn't "god" heal amputees?"
Kyuss Newly Approved Miracle at Lourdes Declared
"As a Chicagoan who was following the scandals that were already unfolding in the archdiocese ..."
DrJ Lessons Learned from False Allegations Against ..."
"Moronic twat."
blueyarrow Fathers Regret Aborting Their Children
"Sounds like some of the worst losers ever."
Kyuss Meet the Heroes Who Defend Life ..."
Browse Our Archives
Related posts from Born Again Catholic 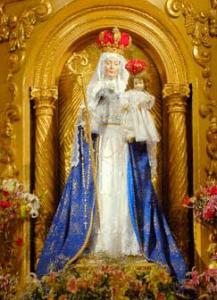 Catholic
Have You Heard of Our Lady of Good...
Born Again Catholic