3 Responses to Critiques of Inerrancy 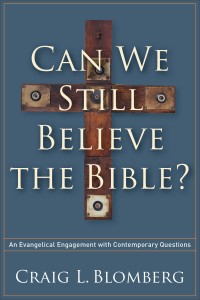 In Can We Still Believe the Bible?, Craig Blomberg offers some observations on critiques of inerrancy and the idea that inerrancy “dies the death of a thousand qualifications” (pp. 126-130).

He first employs Paul Feinberg’s definition: “Inerrancy means that when all facts are known, the Scriptures in their original autographs and properly interpreted will be shown to be wholly true in everything that they affirm, whether that has to do with doctrine or morality or with the social, physical, or life sciences.”

Blomberg says that inerrancy, then, actually has far less qualifications than most major doctrines like the Trinity or various schools within soteriology and eschatology. Feinberg’s definition has only four qualifications, all of which are left to hermeneutical and exegetical debate within these caveats.

He argues that some people falsely consider “infallibility” or “verbal plenary inspiration” to be clearer terms. However, “the meaning of ‘inerrancy’ is morphologically straightforward: without error,” he explains. “What complicates matters is not the meaning of inerrancy, but the debate over what constitutes an error.” This gets to the heart of some of the standard external and intramural debates about inerrancy.

Here are snippets of his responses to three main critiques about errors in the Bible:

1. “We live in a scientific world that values high degrees of precision in countless walks of life. … [H]ence by default we frequently impose modern standards of accuracy on ancient texts in hopelessly anachronistic fashion. Imagine being told one day that your job performance was going to be assessed based on standards not invented until the forty-second century, or shortly before. You’d be outraged. But often without realizing it, we impose on ancient documents twenty-first-century standards that are equally inappropriate. …

To this day, we use round numbers; ancient cultures did so regularly. … A grammatical or spelling “error” in any culture refers simply to nonstandard writing or usage of words; it is not as if there is some divinely mandated correct way to turn oral speech into letters or to arrange words to make a coherent thought. … The reporting of people’s words is a particularly significant example of where the ancients employed noticeably less precision than we moderns do. … In fact, when one historian borrowed from existing sources, it was considered good literary style and an appropriate way of owning information for oneself not to reproduce all the words verbatim…”

2. “Another mistake many people make is to confuse inerrancy with literal interpretation. Even the expression ‘literal interpretation,’ as it was employed by the Reformers, meant taking the words of Scripture according to their most straightforward, intended meaning, not ignoring figurative language. … Entire passages and even whole books of the Bible may employ literary forms or genres that are misunderstood if taken completely historically. Apocalyptic literature affords a classic example. …

To affirm the inerrancy of Revelation 13:1-10 does not commit us to believing that a dragon or a beast actually exists as depicted in these verses. Instead, it means that the realities to which they point—Satan and a coming antichrist—really exist, and John really did have a God-given vision in which these individuals were represented by the creatures described. Indeed, defenders of inerrancy do not reflect often enough on what it means to say that nonhistorical genres are wholly truthful.”

3. “Inerrancy does not preclude the hermeneutical need to distinguish between situation-specific and timeless commands or models in Scripture. Applying Old Testament texts in the New Testament age requires believers to filter each passage through the grid of its fulfillment in Christ (Matt. 5:17-20). Believers should not bring bulls or goats with them to church to be slaughtered to atone for sin … Christ has paid it all, as our once-for-all sacrifice for sin (e.g., Heb. 9:24-28); we obey the Levitical commands by trusting wholly in Jesus’s full and final atonement. …

When ancient Christians greeted one another with a holy kiss, they were following a culturally common and non-erotic practice of greeting friends. If kisses in certain modern cultures are not a common greeting and are likely to arouse romantic feelings, then some cultural equivalent such as a warm handshake or appropriate kind of hug should be substituted. These are all issues of proper hermeneutics and contextualization, not the direct application of a belief in inerrancy.” 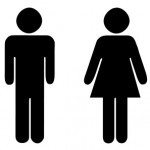 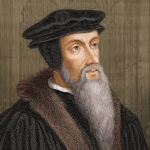 March 12, 2015 The Practical Calvin
Recent Comments
0 | Leave a Comment
"Angels; whatever they are ...are from heaven , not of earth ... anything or anyone ..."
Stephaine A. Carter Biblical Sci-Fi? Aliens, Angels, and the ..."
"Thanks for this insight into John’s dig at Domition and Rome’s wannabe divines. Will you ..."
jeff q When the Book of Revelation Takes ..."
"Hello THeodore. Thank you for your comment. While I do not agree with all of ..."
walter lamphere What We Know about Arius and ..."
"Certainly no one here would equate obedience to the Lord Jesus Christ as "Legalism".................Right?"
WestWins The Sermon on the Mount and ..."
Browse Our Archives
get the latest from
Evangelical
Sign up for our newsletter
POPULAR AT PATHEOS Evangelical
1

What Rejecting God Did to Higher...
Cranach
Books by This Author Books by Brandon D. Smith