Paul and the Trinity: An Interview with Wesley Hill

Paul and the Trinity: An Interview with Wesley Hill May 25, 2015 Brandon D. Smith 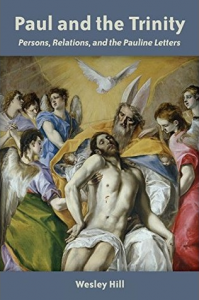 Dr. Wesley Hill, Assistant Professor of Biblical Studies at Trinity School for Ministry, stops by today to talk about his new book, Paul and the Trinity.

Wesley’s book has been called a “breakthrough” in Pauline studies, and could very well be the model for how to faithfully represent the interdependence of robust theology and rigorous exegesis. I recently finished reading the book and one thought continually came to mind: this is a book that cannot be ignored. As another friend told me before I read it, “Paul and the Trinity forges a new path in theological interpretation of Scripture and New Testament studies.” Hopefully this interview will encourage you to buy it and decide for yourself!

Brandon: How does Paul and the Trinity seek to correct misconceptions about Paul’s theology, particularly in regard to the Trinity?

Wesley: One influential misconception about Paul is that he doesn’t have anything distinctive to say about God. As the great Pauline scholar E. P. Sanders once said, “From [Paul] we learn nothing new or remarkable about God… it is clear that Paul did not spend his time reflecting on the nature of the deity.” Paul’s distinctiveness is thought to lie, rather, in his Christology. But my book tries to make an argument that Paul’s Christology is inseparable from his view of God, so that the relationship between God and Jesus is mutually constitutive for the identities of both. You can’t say Paul has a distinctive Christology without also saying Paul has a distinctive understanding of God.

Brandon: While he’s obviously not working with precise Nicene language or concepts, you argue that exegesis of Paul does not reach its full potential without Trinitarian theology. Can you explain that more fully?

Wesley: Trinitarian theology says that God is fundamentally and eternally relational. The Father would not be Father without the Son. The Son would not be Son without the Father. The Spirit would not be the love and gift that he is without the Father and Son who together give and receive him. My book is trying to make the case that that Triune relational “grammar” is a deep insight into Paul’s theology. Paul, too, well before the Council of Nicaea, understood what Kavin Rowe has called the “relational determination” of the divine identity.

Brandon: Do you believe that Paul’s understanding of the Trinity is more fully developed or unique than that of other biblical writers?

Wesley: I don’t think it is more fully developed than, say, the Fourth Gospel’s. Borrowing terminology from my colleague David Yeago, I would say that Paul has a unique conceptual apparatus for talking about God, Jesus, and the Spirit. He uses the reverential substitute “Lord” for the divine name YHWH, and he applies that title to God the Father, Jesus the Son, and the Spirit. But Paul thereby arrives at the same theological judgment as John, the author of Hebrews, and even the Synoptic Gospels, in my interpretation. There is clearly a wide variety of theological vocabularies in play in the New Testament, but in my view there is deep continuity among the various writers at the level of Trinitarian theological judgments.

Brandon: Which thinkers set the foundation for Paul and the Trinity?

Wesley: Kavin Rowe’s book Early Narrative Christology was very important for my work. It made the argument that Trinitarian concepts of “persons” and “relations” were the outgrowth of New Testament texts. The Gospel of Luke, in Rowe’s reading, portrays the “Lord” of the Old Testament and Jesus the “Lord” as “overlapping.” And yet Rowe also emphasized the irreducible distinction of the two in Luke’s narrative: Jesus carries out the mission given him by Israel’s God. This “doubling,” in which both profound identity and distinction are held together, is what later Nicene theology expressed with the language of one ousia (“essence”) and three hypostases (“persons”).

Brandon: There’s been a divide between systematic theology and biblical studies for centuries (insert Gabler joke here), yet Paul and the Trinity is a rich combination of the two. How can this integration move Pauline studies forward?

Wesley: Although it seems counterintuitive to many biblical scholars, reading the creedal, confessional, doctrinal texts of Christian history is, or should be, an exegetical enterprise, precisely because doctrines are exegetically derived. If doctrines came from Scripture, they should lead back to Scripture. In this way, we might say that Christian doctrines like the Trinity are retrospective: they are oriented toward the reading of Scripture; they are meant to take us back to reread the text. They are hermeneutical aids, if you like. Doctrines are not free-floating entities that improve upon the messiness of Scripture by replacing Scripture’s loose ends with a more straightforward, easy-to-follow summary. Rather, they are meant to prompt and enable deeper wrestling with biblical texts, including, as I argue, Paul’s letters. 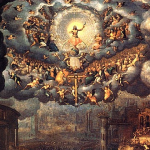 May 21, 2015
The Pastoral Paul Was Always Looking Ahead
Next Post

May 28, 2015 I'm Headed to Australia, Mate!
Recent Comments
0 | Leave a Comment
"Angels; whatever they are ...are from heaven , not of earth ... anything or anyone ..."
Stephaine A. Carter Biblical Sci-Fi? Aliens, Angels, and the ..."
"Thanks for this insight into John’s dig at Domition and Rome’s wannabe divines. Will you ..."
jeff q When the Book of Revelation Takes ..."
"Hello THeodore. Thank you for your comment. While I do not agree with all of ..."
walter lamphere What We Know about Arius and ..."
"Certainly no one here would equate obedience to the Lord Jesus Christ as "Legalism".................Right?"
WestWins The Sermon on the Mount and ..."
Browse Our Archives
get the latest from
Evangelical
Sign up for our newsletter
POPULAR AT PATHEOS Evangelical
1

What Rejecting God Did to Higher...
Cranach
Books by This Author Books by Brandon D. Smith