What Does the Number 666 Mean? 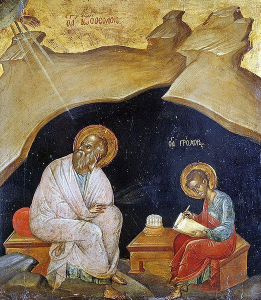 On a recent episode of Word Matters, Trevin Wax and I discussed a few different views on the freaky number, 666. Let’s take a look at the passage in Revelation where we find this number, and then consider a few different options for the meaning of 666.

Then I saw another beast coming up out of the earth; it had two horns like a lamb, but it spoke like a dragon. It exercises all the authority of the first beast on its behalf and compels the earth and those who live on it to worship the first beast, whose fatal wound was healed. It also performs great signs, even causing fire to come down from heaven to earth in front of people. It deceives those who live on the earth because of the signs that it is permitted to perform in the presence of the beast, telling those who live on the earth to make an image of the beast who was wounded by the sword and yet lived.

It’s worth point out at the start here that “666” is not necessarily even the number, because “616” appears in the earliest manuscript we have of Revelation 13:18. “666” is most common among most manuscripts, but isn’t the only number we see. In the CSB, for example, “666” is in the text, but there is a footnote that says, “Other Gk mss read 616.” When translators of any Bible translation are trying to decide how to render a text like this, they’ll often lean toward the word or number that appears in the most manuscripts, but the earlier manuscripts do hold some weight because they might be closer in time to the originals.

So, with that in mind, let’s look at some of the major views. Note: there are dozens of other views on what “666” means, but these are probably the most popular and plausible.

1. 666 represents a person or symbol in the future.

This view is sometimes called the futurist view, because it views the “mark of the beast” as something that’s not yet happened, and relates to a future Antichrist who will prepare the way for Jesus’s return. John is talking about something in the future, and therefore 666 doesn’t represent anything that would apply to his own time. This is popular in many churches, and particularly holds weight with the dispensational-leaning crowds, who view almost all of Revelation as a depiction of future events.

Some theories have suggested that “the mark of the beast” could be some sort of worldwide currency or designation. So, they would say that this mark might be referring to a certain type of microchip that people would need to wear or own to spend money, or it might be a way of claiming citizenship or allegiance to a particular worldwide government. So, “666” might or might not be the literal number, but this “mark” has something to do with the future and is a sign that Christ would be returning soon.

So in short, this view holds that “666” is part of a key to unlocking when and how Jesus will return.

This view is sometimes called the preterist view, though that term carries some theological baggage with it—some preterists would deny the future return of Jesus, for example—but the idea here is that “666” is referring to a particular person or object in John’s time of writing the book. So the last view would say that the “mark of the beast” is something that’s occurring later in relation to a future Antichrist, this view situates 666 within the direct context of Revelation’s writing and immediate audience.

This is where the variant numbers of 666 and 616 come into play a little more. This takes a little explanation, but hang with me. Proponents of this view follow an approach called “gematria,” which is the practice of assigning numbers to letters. The idea, then, is that each letter in a name has a numerical value (like, B = 10 and T = 200), which gives your name a numerical value when all the letters are added up. So if G = 10 and O = 5 and D = 5, the word “God” would equal 20, and that’d be the numerical value of his name. So a Christian could say, “I worship the number of a being, and his number is 20.”

This view points to “666” representing Nero, the Roman Emperor who was notoriously evil and violent. In a few different ways, gematria points to N + E + R + O = 666. Nero might’ve been dead by the time Revelation was written (depending on if you affirm an AD 65 dating or AD 95), but his reputation was felt throughout Rome for long after his death. Depending on if John was using the Hebrew, Greek, or Latin spelling of “Nero” or “Ceasar Nero,” there are various ways you can add up the letters in his name to reach the numbers 666 or 616. This would make sense, since Nero certainly qualified as a beast who tried to thwart God’s purposes.

Proponents of this view also point out a few pieces of context in this passage. For example, it’s mentioned in Revelation 13 that this mark has something to do with buying and selling. This is similar to a point those of the first view make – it must have something to do with economy or government, Roman coins contained the face and name of the Emperor on them, and so John could be trying to get across the idea that Roman coins had the “mark of the beast,” Nero’s name, on them, and so Christians should beware of being too involved in the economic or governmental rule of an anti-God government. And depending on which side of the kingdom you’re on, it’s possible Nero’s name was spelled differently, thus meaning that manuscripts from different areas of the Roman Empire might use 616 instead of 666.

There’s so much more to say on this view, but basically: “666” represents Nero, and John is telling his audience to remember that Jesus is Lord and Caesar is not. You can’t have allegiances to both kingdoms.

This view is often called the idealist or figurative view. Though similar to the last view in saying that “666” is symbolic, they would say that trying to add up the numbers to reveal someone’s name is a waste of time, because it’s easy to manipulate the numbers or spellings to add up to any number you want.

Instead, this view says that “666” has universal or symbolic significance. So it’s not about some future code to break before Jesus returns, but it’s also not a code to break to understand which person the number might represent.

Many proponents of this view would say that “666” is used intentionally in contrast to “777” – the number understood to be complete perfect. So God’s number is 777, and 666 is some sort of unholy Trinity, three numbers added together that are just short of 777, and this just short of perfection. While sympathizing with both of the other views in saying that 666 is represents something or someone anti-God, it’s a more generic contrast to God’s good purposes of redemption.

In his monumental commentary on Revelation, G. K. Beale says,

The repetition of six three times seems to indicate what might be called the “completeness of sinful incompleteness” found in the beast. The beast epitomizes imperfection, while appearing to achieve divine perfection. Three sixes parody the divine Trinity of three sevens. … the beast as a counterfeit Christ and the second beast as a counterfeit prophet. When believers successfully resist the beast’s deception, they avoid being identified with the essence of his name, which is imperfection personified.

First off, we should remember that John uses numbers as symbols often—everyone should agree with that. The real issue is which numbers we should take “literally” and which are figurative or coded. But I think we too often see Revelation as purely a future prediction book, and we miss that it’s a book rooted in its time, like all books of the Bible. The author, John, is receiving a vision from God that certainly depicts some future events, but he’s still a man in a context with an audience.

The audience of Revelation is living under strong persecution in most places, and they’re being challenged by the government to bow down to Caesar, who believes himself to be divine. So I think much of Revelation is coming from and intended for that context. The hearers of Revelation weren’t passive listeners to a book that wasn’t really about them, but merely about some people in the future.

So all that said, I would lean toward a hybrid of views 2 and 3.

There is a code to broken here—John tells them to “calculate the number of the beast,” and points out that the number is in fact a name. So it seems that some sort of play on a person’s name in view here, and he tells them that those who have wisdom and understanding actually have the ability to decode that number and know who the person is. I lean toward a later date for Revelation (AD 95), so I believe it was likely written during Caesar Domitian’s time and not Nero’s, but there’s also some historical evidence that indicates that Nero was sort of the archetype of caesarian persecution, and Domitian was considered a type of Nero. In that sense, John could’ve been telling his audience that Nero and others like him are the “beast.”

I also think the third view comes into play. That 666 contrasts 777 as an “unholy Trinity” could be true at the same time as view 2, because John could be using a double-meaning here—and we shouldn’t put that past him, considering how symbolic and clever he is with language. So, the “mark of the beast” could also be making the point that Nero is part of the anti-Trinity. But with the 616 variant manuscript, it’s a little less likely to me, although there are some arguments out there showing that 616 could indicate imperfection or an unholy Trinity.

The big point is this: Jesus is Lord and Caesar is not. Don’t bow down to false gods or false governments, but rather place your hope in the triune God who is redeeming all things. Nothing can thwart him, and no beast can devour him.

Listen to this episode of Word Matters to hear Trevin’s view and more of our discussion. 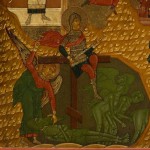 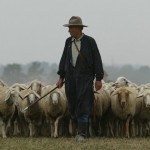 May 10, 2017 Are You Sure You're Called to Be a Pastor?
Recent Comments
0 | Leave a Comment
Browse Our Archives
Related posts from Church Grammar