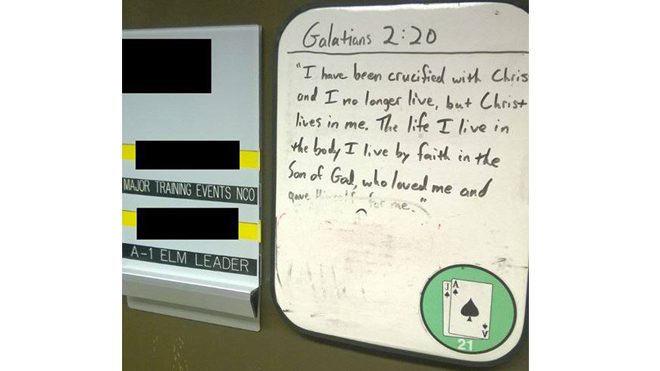 Todd Starnes has a pretty shocking and maddening article:

The Air Force Academy removed a Bible verse posted on a cadet’s whiteboard after it determined the posting had offended other cadets, a spokesman for the academy said.

The cadet wrote the passage on the whiteboard posted outside his room. “I have been crucified with Christ therefore I no longer live, but Christ lives in me,” the verse from Galatians read.

Mikey Weinstein, director of the Military Religious Freedom Foundation, told me 29 cadets and four faculty and staff members contacted his organization to complain about the Christian passage.

“Had it been in his room – not a problem,” Weinstein told me. “It’s not about the belief. It’s about the time, the place and the manner.”

He said the Bible verse on the cadet’s personal whiteboard created a hostile environment at the academy.

Who knew that a Bible verse posted on a whiteboard could generate such outrage?

This is so sad and stupid.  So, I guess Weinstein believes there’s a time, place, and manner to exercise Constitutional rights?

Well, I guess I agree — the time is now, the place is everywhere, and the manner is “without backing down.”

We have to stand up for free speech!

(By the way, Mikey Weinstein calls Christians in the military “monsters who terrorize.”  With friends like this…. who needs enemies?)

You can see from the photo that the Scripture was erased, but that cadet can rest knowing the Academy can’t really erase the truth.

[Sign a petition to keep public displays of faith safe!]

March 17, 2014 Pastor Saeed in a Hospital in Iran, Chained to a Bed, Denied Treatment
Recent Comments
357 Comments | Leave a Comment
Browse Our Archives
Follow Us!