Comedian Sarah Silverman is what you might call a “shock comedian,” which is the label you put on people who aren’t funny but who say really horrible things to get a reaction anyway.

Recently, she was on a “game show” with other female comics, as part of a a telethon put on by something called Lady Parts Justice League.  During the telethon, they played a game called “S**tty Law Charades.” The purpose of this game was to have one player act out a law  that the ladies disagreed with.  They came to a law that prevents parts of aborted fetuses from being used in food and drink products.  Yes, really.  IJR has the reasoning behind this weird law, explaining that this was an “erroneous controversy dating back to 2012 about PepsiCo contracting with a biotech company called Senomyx that was allegedly using aborted fetal cells to enhance the flavors of its soft drinks. Those claims were thoroughly debunked.”

Of course, they apparently didn’t know that.  After the comic guesses the “sh*tty law,” Silverman takes the mic and explains “If anything has ever made me want to eat an aborted fetus, it’s this law.”

You can watch the actual exchange below, if you have the stomach for it:

Apparently, this wasn’t the only weird thing that happened on the telethon. The Daily Wire has the transcript of Silverman saying that a new pro-life law makes her want to eat a dead baby.  Yes.  Really.  There’s a proposed bill that, if it passed, would require all aborted fetuses to be cremated or buried — instead of thrown unceremoniously away.

Here’s Silverman’s hot take on that:

“F**king funerals for f**king aborted fetuses? I would like to speak at those funerals. He lived the way he died. He died the way he lived. The size of a sesame seed with no discerning brain function.”

Nice.  And then, she added:

“Religious freedom used to be such a beautiful thing ’cause it was like this big inclusive thing in the country, and now it’s just this shroud to legalize hate and s**t like that.” 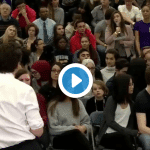 February 7, 2018 Daddy-Daughter Dance Canceled, Because of NYC’s Gender-Neutral Policy
Browse Our Archives
get the latest from
Politics Red
Sign up for our newsletter
POPULAR AT PATHEOS Politics Red
1