So I missed Tony Jones’ deadline.  His open invitation to progressive bloggers said in part:

“Progressive/liberal/mainline theology, on the other hand, has a PR problem. We might think that people know what we think about God, but they don’t. It’s clear in the comments on this blog and elsewhere. …

Thus, I have a challenge:  I challenge all progressive theo-bloggers to write one post about God between now and August 15.”

OK.  I’ll talk about God.  I am a theologian, after all.  To be clear, this will also be my first in a series of posts that are “getting theological.”  Stay tuned for Jesus, being human, the bible, church, sabbath, hope, and whatever other theological whimsy carries me away.

But first, God.  And isn’t that exactly the point? 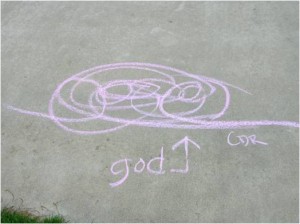 My God-talk is framed with the words of those who’ve helped me figure it out.

i found god in myself

God is creator and a sustaining source of life, and therefore present in me.  In you.  In those whom society shuns, as Shange said so beautifully in for colored girls.  This has radical consequences for our understanding of being human, so that post will come later.  Consider what this means about God.   Fully present in all things, all bodies.  A reason that they are.  Not sanctioning all that we do (umm, that’ll be sin … again, later), but reminding me that no matter what the world says about my worthiness, it isn’t caught up in skin color or gender or financial stability or physical appearance.  It begins and end with God.  This is what it means to be source and sustenance.  If I’m created in the image of God, so are you.  Even and especially when we don’t have the same image.  The diversity of the world and all of its life, diversity abounding … this is God’s image because it is God’s creation.

I have already suggested that if God is male, then the male is god.  (p.19)

God isn’t male.  But you know, God might be female.  Maybe God transcends gender.  Actually, we have no idea what that means because human society has thusfar demonstrated itself to be unable to transcend gender.  Therefore, images of God rarely escape gendering, produced as they are by human history and community.  When society is skewed in the direction of the male, as patriarchy has ensured that it has been for generations, then images of God are similarly skewed.  It’s nonsense, really.  But the theological is sociological, and vice versa.  This is why I’m more interested in affirming female language and images for God than male.  It’s strategy, really.  And let’s not pretend that theology isn’t strategically employed.  Unlike Tony who said in a comment on his own post that “all of our academia has squelched our ability to speak candidly and unapologetically about God,” I think that our academia has bolstered the ability to untangle what’s really going on with so much of traditional God-talk.  Once untangled, we can be free to say no, in fact, Father isn’t God’s proper name.  Because it’s as important to say what God isn’t as to say what God is.

SHE WHO IS:  linguistically this is possible; theologically it is legitimate;  existentially and religiously it is necessary if speech about God is to shake off the shackles of idolatry and be a blessing for women.  (p.243)

YHWH is a much better name for God than Father.  Not because it is that which is revealed to Moses in Exodus, but because it is a verb.  A verb!  Be … to be … I am that I am … I will be that I will be … the Harper Collins Study Bible footnotes properly indicate that we’re unsure of what form of the verb “to be” this Hebrew word is.  And how great is that?  The name of God is first of all a mystery.  Mystery!  Remember that all self-assured God-talkers!  The name of God is second of all not a fixed static noun, proper or otherwise.  It’s dynamic.  Alive.  Moving.  Breathing.  Doing.  It’s the word we use to name existence itself.  Being.  Be-ing.  Present, future, and whatever else there IS.  And given what I said above, I’m with Elizabeth Johnson in that we speak of God as She Who Is.

God has power in a mutual relationship with the world.  I have never understood why we’d valorize a concept of power as coercion, dominance, and control in a deity when we abhor it in our fellow human beings.  We call that violence.  Then again, I don’t understand much of what a patriarchal culture valorizes.  Rather than this making God less powerful or less worthy of worship, as critics of what is called process theology usually charge, I think it makes God more worthy of respect and praise.  God does what God can do, and we are called to do what we can do.  What we do affects God, and what God does affects us.  If God weren’t affected by the world, grieved by our pain, angered at our injustices, enthralled by our joys, well then … what’s the point?

In some of my classes, I ask students to draw a picture of God.  It’s the kind of task that breaks up a boring lecture, let’s us use crayons in college, and prompts discussion about why so many of us are quick to dismiss our ability to draw the divine, when we are so confident of what we or ancient authors say with words.  Pictures with crayons (or sidewalk chalk as in my picture) are as limited and flawed, partial and full of possibility, as anything we can write or say with our words.

And that’s the most important that I have to say about God.

August 24, 2012 Honorable Mention: This is What a Lutheran Bishop Looks Like
Recent Comments
0 | Leave a Comment
"They were all too aware of human perversions then and in the age before. Genesis ..."
Bob Shiloh How Gender Studies Transforms Religions
"I have Eve Wood-Langford's book in my personal library. I bought it because I was ..."
Walter Mattfeld The Most Interesting Chapter in the ..."
"You guys aren’t even close to Christians. You believe you’re better than Christ and can ..."
Kyle Racism, Sexism, & The Holiday Classics
"Even as a reverent agnostic, yet assuming a genuine divine revelation, I wonder how that ..."
John Gills How Gender Studies Transforms Religions
Browse Our Archives
get the latest from
Progressive Christian
Sign up for our newsletter
POPULAR AT PATHEOS Progressive Christian
1